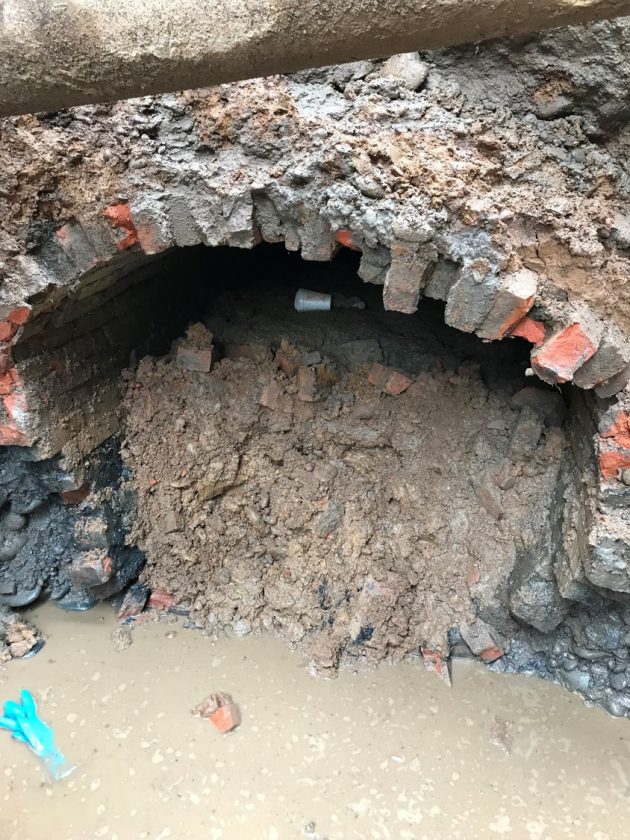 The city Municipal Water Authority estimates $550,000 in emergency repairs will be spent on the Campbell Street sinkhole repairs — as part of the city’s century-old sewer line, this sinkhole is symptomatic, according to project engineers.

The repairs are slated for completion in two weeks, weather-pending, officials said Wednesday.

Crews reported catastrophic damage upon opening the street, June 1, and plans to repair the entire sewer line between Grace and West Third streets — a 365-foot-project — were put in place, according to officials.

The 140-year-old sewer line was made of brick, and the mortar has eroded to such a point that the bricks were falling into itself. Four years ago this section of pipe was part of a cleaning operation which removed 43 tons of debris. In just a few years, workers had to use a push-camera to investigate the damage due to rocks, dirt and bricks.

Initially, the authority planned to cut plastic pipe in half, lay it over top of the collapsed area and put concrete around the pipe, said Michael Miller, executive director of the authority.

“It didn’t work because the top of the pipe just kept collapsing,” he said.

Instead, a 260-foot-long middle section of the sewer line was completely replaced with 48-inch triple-walled HDPE pipe.

Eric Smithgall, director of authority engineering, said the pipe is strong and durable with a life-expectancy of 100 years.

Despite such an issue arising in a city, Smithgall said there were very few people impacted by the construction.

“One of the blessings of this project has been that the majority of housing here is college housing,” he said, adding those still in the area have access to their water. “We’ve gone to great lengths to keep the people happy. We’ve also provided them with bottled water, just in case they were not comfortable.”

Two bypass pumps have been installed. One 6-inch to allow the continuous flow of sewage, and another 12-inch for storm water drainage.

During the repairs, 17 feet beyond the initial excavation, another breakage was found with similar properties as the original sinkhole, said Erin Threet, project engineer with HRG Inc.,

“There’s likely more holes, even in this same run,” she said. “That should tell you the general condition of the brick sewers in Williamsport.”

Dave Gutelius Excavating, the city’s usual emergency contractor, handled the initial repairs, however National Gunite was also contracted to make repairs at the northern 25 feet and the southern 80 feet.

National Gunite specializes in lining pipes with a concrete-mix, installing a layer of caging for support, then covering that with the mixture. This method is expected to last 50 to 75 years in a sewer line.

Along with keeping cost down, Threet said the lining would provide a tie-in point for the new pipe to connect with the old pipe and allow the bending southern portion to attach to the manhole.

“That’s something that would have been really difficult with pipe replacement, you would have had to set a new manhole, it would become very complicated,” she said.

Lastly, the manholes themselves are also made of brick and will vary in size.

“The prospect of trying to put a dissimilar sized pipe inside of an existing brick manhole, we would have potentially had problems with the manholes themselves, which could have ballooned,” said Threet.

There are 4,795 feet of brick sanitary sewer remaining throughout the city, which the authority planned to replace, but the emergency Campbell Street project forced the authority to produce the funds sooner than expected and at higher rates given the time-crunch, said John Baker, director of authority finance.

“This is a huge budget hit for us. We’ve never seen anything like this,” he said. “There’s a good chance that this could creep to a $600,000 repair project. We’re going to delay some things, we’re going to move some things around. But it doesn’t blow our budget completely.”

There are very few grants available, according to Baker, who said the repairs would be filed as routine maintenance in the applications. Also, the state Department of Transportation considers the sewer lines too deep for any kind of applicable cost-sharing.

To accommodate infrastructure repairs, the potential 3 percent increase in water rates may rise to 4 percent, next year, said Baker. A final rate proposal will be made next week.

Additionally, the city’s billable water-users is stagnant or slightly decreasing. Baker said he will propose increasing the rates around 3 percent each year, or about a 20-cent increase on monthly water bills each year.

“I think the philosophy of 2 to 3 percent increases every year is very palatable to the community. It’s not out of the ordinary, and with what we’ve learned on the sanitary side — something catastrophic like this can happen,” he said.

The rest of the sewer line on Campbell Street, which extends 615 feet north and is also made of brick, is slated for construction in four years, said Smithgall.

As far as the rest of the brick sewer lines throughout the city, Smithgall said the lines will have cameras driven or pushed through them, then the lines that need cleaning with receive it.

“At that point in time, we’re going to be able to have our consultant engineering firm give us a recommendation as to what they think we should do with those lines,” he said.