City commemorates founding father with lessons about his life 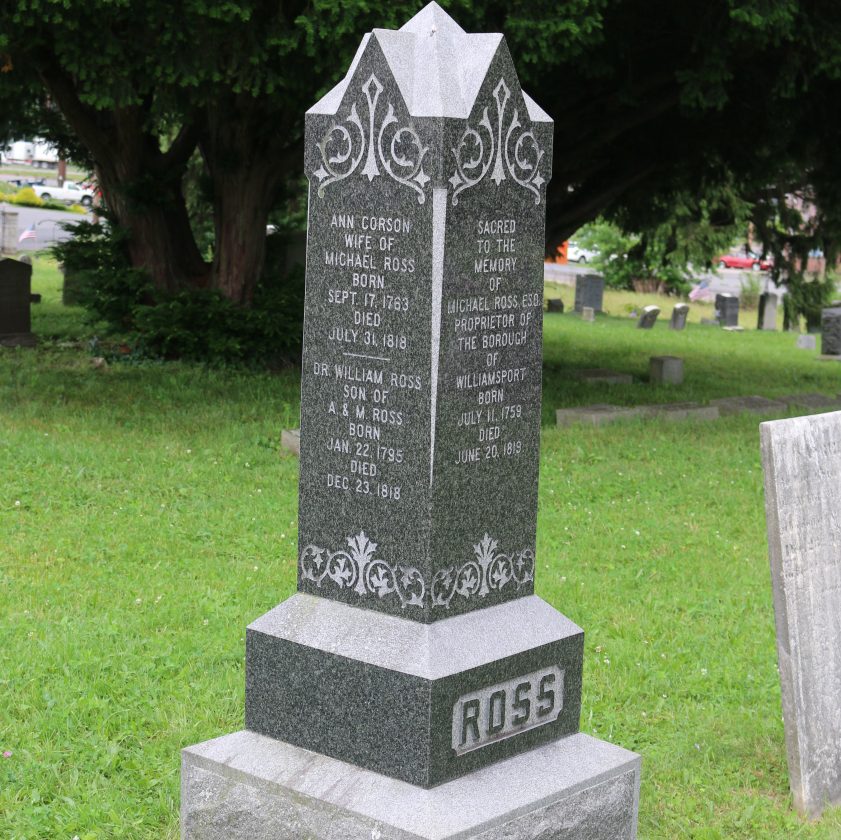 Williamsport has an event center, townhouse and hotel room named after the city’s founder — but how much do city residents know about the historical contributions of Michael Ross?

History was shared on one of Williamsport’s founders, Michael Ross, recently at the Thomas T. Taber Museum at a commemoration of the 200th anniversary of his death. Ross played a large role in the formation of Lycoming County and the establishment of Williamsport as a county seat.

Due to the weather the event, originally scheduled in Williamsport Cemetery on Washington Boulevard, next to Ross’s dark grey granite monument, was moved indoors.

“Our job as members of the historical society is to preserve treasures of Lycoming County from the smallest tokens to a Model T Ford,” said Gary Parks, Lycoming County Historical Society executive director.

“We need to preserve our histories so our descendants can tell stories about Ross 100 years from now,” said Gary Weber, president of the Lycoming County Historical Association.

The museum displays Ross’s original indenture document and a portrait.

Some original descendants of Ross attended the commemoration including 12-year-old Ross Michael Mahler, named in memory of his ancestor. He said carrying on the name makes him proud. And he found it interesting that “he named the town after his son.” Mahler is the son of Charles and Melissa Mahler, of Williamsport.

Ross landed in Philadelphia in 1772 with his mother and they became indentured servants to Samuel Wallis, who owned a large piece of Muncy Township. He was trained as a surveyor’s assistant and farmer. He became a successful surveyor and used the money to purchase 280 acres along the Susquehanna River. Also, he was given over 100 acres by Wallis. He donated some of his land to the state commission to have a courthouse and jail built, which opened the door for Williamsport to be named the county seat.

Dr. John Piper, historian and museum board member, spoke on Ross as an entrepreneur.

“At the time 60 to 70 percent of people were farmers,” Piper said. “Ross was an entrepreneurial farmer and added a substantial tract of land named Virginia. I would like to know why he named it Virginia. And at the time the land included a port which was used by Native Americans. But most of the land was swampy.”

The land then became the Borough of Williamsport. Ross and William Hepburn were both founders.

Piper added Ross was a visionary and wanted to create a market town that would thrive. “Ross designed Williamsport to have a special space for a market on Market and Third streets which had wider streets for carts,” Piper said. “It’s sad to me the current farmers market is not held there. But his vision is alive and well with Market Square featuring a diamond for Little League, which is a giant business.”

Ross married Anne Corson and they had two sons and three daughters; William being the eldest son. The name of the village was written as William’s Port, two words, in the beginning.

Ross was originally buried in the Williamsport Pine Street burial ground with his wife and two sons but due to the construction of the former City Hall in 1893 they were moved together to Williamsport Cemetery.

Joe Grafius of the cemetery association spoke on the need for fund assistance in maintaining the Williamsport Cemetery.

“Two weeks ago volunteers mowed and weed wacked the grounds and the grass was 2 feet tall,” Grafius said. “We are looking for solid organizations to donate or there may be no other recourse but to remove the graves.”

The cemetery association has been taking out ads since the 1920s for help and all trust and cemetery funds have been depleted. Grafius said he would take any assistance and to please contact him.

To conclude the commemoration the audience listened to the tune “Forget not the dead” sung by Cynthia Pfleegor, Donna Seabridge, Ann McMahon, Nancy Winder, Naomi Huffman and Carol Shetler.