Past, present and future embraced by 2019 Muncy grads 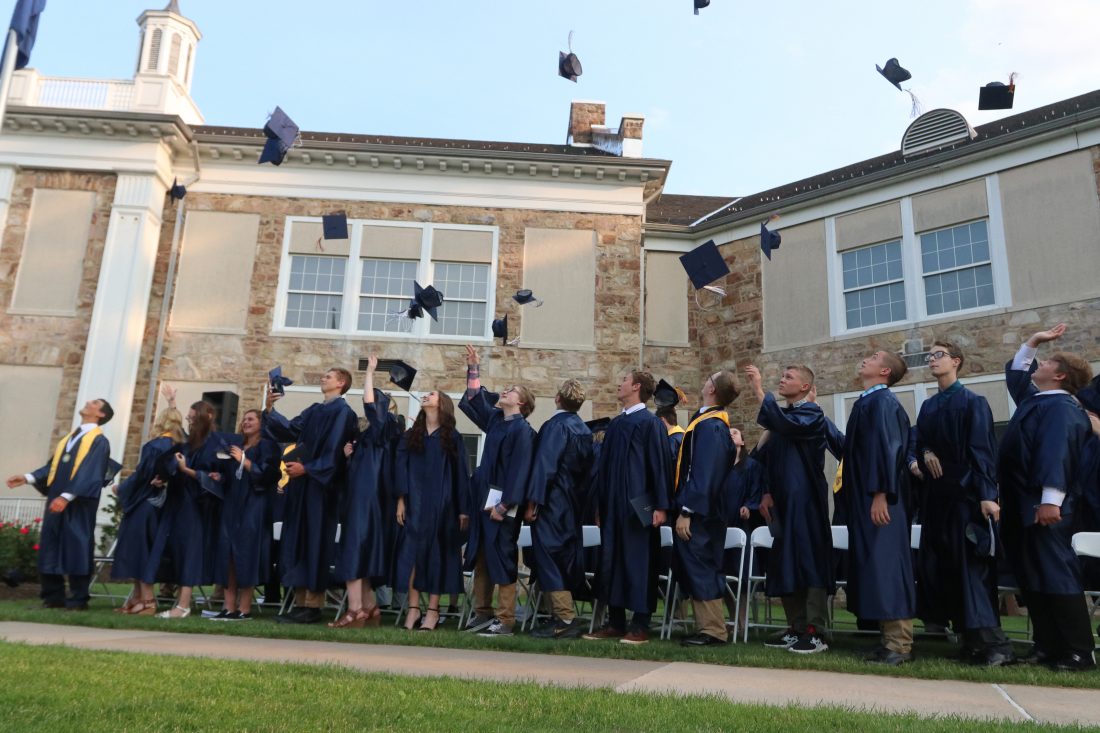 KAREN VIBERT-KENNEDY/Sun-Gazette The graduates throw their mortar boards in the air at the 139th annual Commencement at Muncy High School on Friday evening.

MUNCY - With the Muncy High School crest as the back drop the past, present and future were embraced as 64 students graduated in the 139th annual commencement.

Tyler Sampsell, a member of the class’s National Honor Society, opened the commencement with a welcome speech following the talented Gianna Olivia Edkin’s vocal performance of the “Star Spangled Banner.”

“I feel very honored to be a part of this group of incredible, talented individuals who I have come to know over these many years,” Sampsell said. “And I wish them all luck in their future plans beyond this school.”

Jacob Sobjak, a top five graduate and student speaker for the class, first spoke of the past.

“We have spent the past few years with one another, seeing each other almost daily, allowing us to personally witness the transformations that have occurred in each of us,” Sobjak said.

Sobjak continued by diving into the many individual memories the class will cherish, sparking laughter from both the class and audience members.

“Others will reminisce about gym class, with its many games and the fun times we had playing them,” Sobjak said. “Our favorite games included Prison Ball, Banana Ball and Bomber, which, if we are being honest, are all actually just dodgeball.”

The smiles continued as Taylor Bryson, a top five graduate and student speaker of the class, stood behind the podium and addressed, what many people fail to live in, according to Bryson – the present.

“The most important thing in life is to live in the moment. I hope you all are pleased with your time at Muncy High School because you will never get it back,” Bryson said. “We are a small school, so we personally know everyone who is in our grade and have known them for years.”

Bryson continued with a message for the class specifically.

“No longer will we see our friends at school every day. We were present, we built relationships, we learned skills and life lessons by being present.”

According to Bryson, the end is only the beginning. The beginning of the class’ future. Sabrina Barner, salutatorian, took the time to speak about just that – the future.

With the analogy of each student being a sailor, Barner created an image of a boat, or vessell, that would carry each one into a future that has a lot of change and choices that she believes the class is prepared for.

“You come to a fork in the river and you must decide which tributary to take,” Barner said. “Your choices define you, the life you live and the impact you could have on the world … You are ready, fully prepared, to emerge as an adept sailor and steer the boat in the direction you want.”

Coleman Good, valedictorian of the 2019 class, followed suit by addressing his classmates on the journey that lies ahead, the future that has been shaped by their four years in the Muncy halls.

Specifically, Good centered his speech on the class quote: “No one knows what changes, big or small, lie ahead. One thing is certain, our journey’s not over.”

Good, the fifth of his family to graduate from Muncy, spoke of the moments the class has had as a hold that indicates the success they will have individually in the future.

“Throughout the last four years here at Muncy High School, there have been tangible indicators of success,” said Good. “Number one is the fact that we are all here. Class of 2019, we have done it; we are graduating. Congratulations! Academically, we have fulfilled all requirements and obligations.”

The students walked with smiles as guidance counselor Erik Berthold announced their names to receive their diplomas. Family, friends and faculty of the school cheered and applauded the accomplishments of the students.

To close out the ceremony, the class of 2019 graduates and the audience of the ceremony stood together for the playing of the class song “Time of Your Life.”