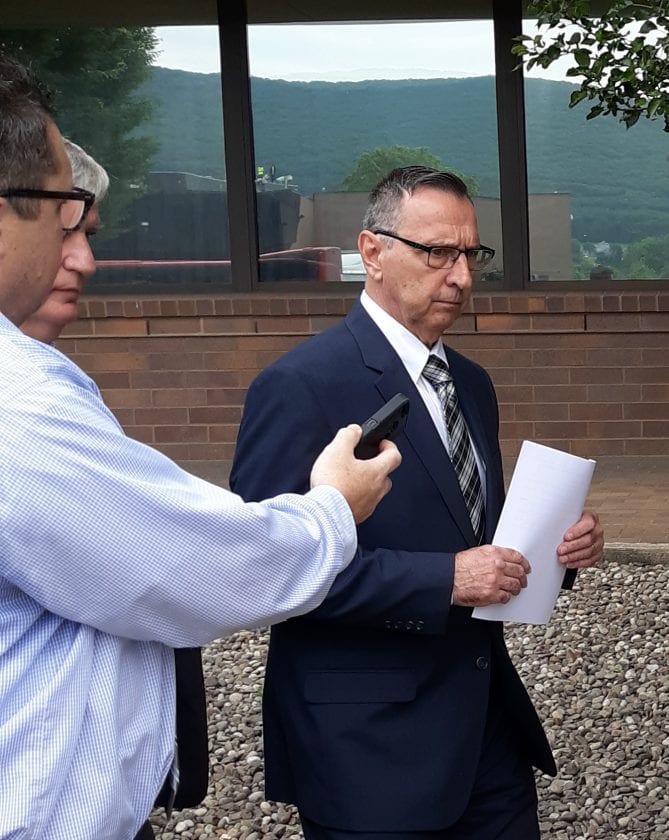 The former mayor of Scranton pleaded guilty Tuesday in U.S. Middle District Court in Williamsport to charges he shook down businesses for bribes and campaign contributions throughout his term and a half in office.

Bill Courtright’s plea to Chief District Judge Christopher C. Conner to bribery, extortion and conspiracy came less than 24 hours after he resigned as mayor of the city of 78,000.

He was released without bail pending sentencing in November.

He is now the third Democratic mayor in eastern Pennsylvania to be convicted of public corruption in about 16 months, all engaging in similar schemes. The former mayors of Allentown and Reading are already serving their prison sentences.

Federal prosecutors said the 61-year-old Courtright, who first took office in 2014, collected tens of thousands of dollars in bribes by pressuring people who needed city permits or contracts. He also got use of a beach property, carpentry at a karate club he owns and landscaping at his home.

He was accused of directing intermediaries to solicit payments, campaign donations and other property for him.

In one case, prosecutors said, the target was a business president who wanted to renew a contract to collect the city’s delinquent tax and trash bills.

Another case, they said, involved a developer who needed permits and licenses to do business in Scranton. Projects were halted and went ahead only after the unnamed person “agreed to provide financial support to Courtright,” prosecutors said.

“In some instances, Courtright took adverse official action against persons and entities to cause them to make payments and contributions for the benefit of Courtright,” prosecutors wrote.

The government said he stored thousands in cash from the delinquent bill collector and the developer in a safe at his home.

The Times-Tribune of Scranton said the city council has 30 days to pick a successor to serve the rest of Courtright’s term, with the council president serving as acting mayor in the interim. If the council does not act, after 30 days a county judge will designate the next mayor.

Courtright’s term as mayor has about 2¢ years remaining.

Former Allentown Mayor Ed Pawlowski and former Reading Mayor Vaughn Spencer were also convicted in the last year and a half of engaging in pay-to-play schemes. Pawlowski was sentenced to 15 years in prison and Spencer to eight.

Courtright faces a maximum penalty of 35 years in prison and a $750,000 fine, prosecutors said.

The Associated Press contributed to this report