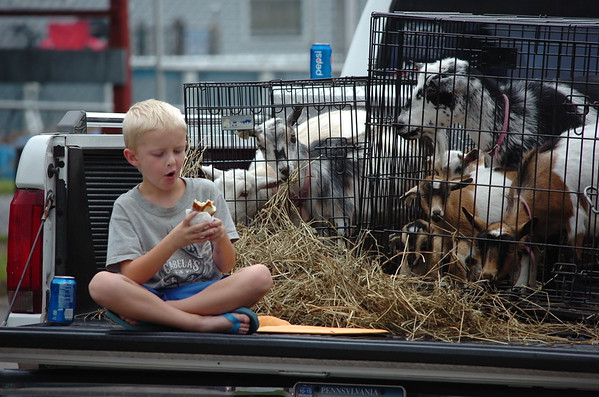 MARK NANCE/Sun-Gazette chase Waring, 5, son of Rob and Heather Waring of Elimsport has a captive audience from his sister, Jenna's Nigeiran Dwarf Goats as he eats his lunch on the tailgate of the family pickup truck at the fair Friday. Friday was moving in day for live stock.

Hard work for many will pay off Thursday, the opening day of the Lycoming County Fair.

The event is rich in tradition and family fun, said officials.

This 149th annual fair is expected to have 150 to 175 outside vendors with 50 more inside, and even more commercial representatives, around 15 percent of which are new to the area, said Rocky Reed, fair board president.

“There’s been a fair here since right after the Civil War,” he said. “But we’re always bringing in new stuff.”

Fair ticket prices have gone down in recent years, he added.

“Every kid should see the fair,” said Reed. “We had a huge attendance last year and we’re looking for an even bigger attendance boost this year.”

In an effort to bring back traditions, horse harness racing will once again be featured as an afternoon event, opening Thursday at 4 p.m. The races have been held on the grounds for 170 years, predating the fair itself by 20 years, he said.

Fostering the fair’s musical repertoire has also been a focus this year, said Karen Yaw, director and secretary of the fair board.

An active member for over 40 years, she said, “We’re trying to build it up. Over the years, of course the music has gone down at the fairs, because there’s so many other areas that supply us with music.”

Ashley McBryde, Country Music Awards’ new female entertainer of the year, will headline the fair’s Country Music Festival, which starts at 5 p.m. on Friday. Honey County, Kelleigh Bannen, the Uptown Music Collective and eight other groups or solo acts will also be featured.

The fair has only gotten better over the years since she took over her aunt’s position in the mid-2000s, said Yaw.

“My grandfather started out here many years ago as secretary,” she said. “It’s in our blood, I’m fulfilling my grandfather’s dream. He wanted to see the fair succeed and I feel we certainly have — out of the 109 fairs in Pennsylvania (ours is) one of the nicest looking fairgrounds anywhere.”

“A lot of the concessionaires are really good people,” added Yaw. “If you ever need anything, though, all pitch in and help you in whatever way they can.”

“They’re just a family, out there just making a living like you and me,” she said.

The fair also spurs the local economy, said Yaw, with grocery stores, gas stations and laundromats, to name a few, thriving over the fair’s duration.

This, paired with the usual lineup of tractor pulls, demolition derbys, and fireworks, Yaw said, “There’s something for everybody here.”

A Lycoming County Fair preview day is scheduled for today, opening at 4 p.m.

With the recent move from the red phase to the yellow phase established by Gov. Tom Wolf, some churches have taken ...