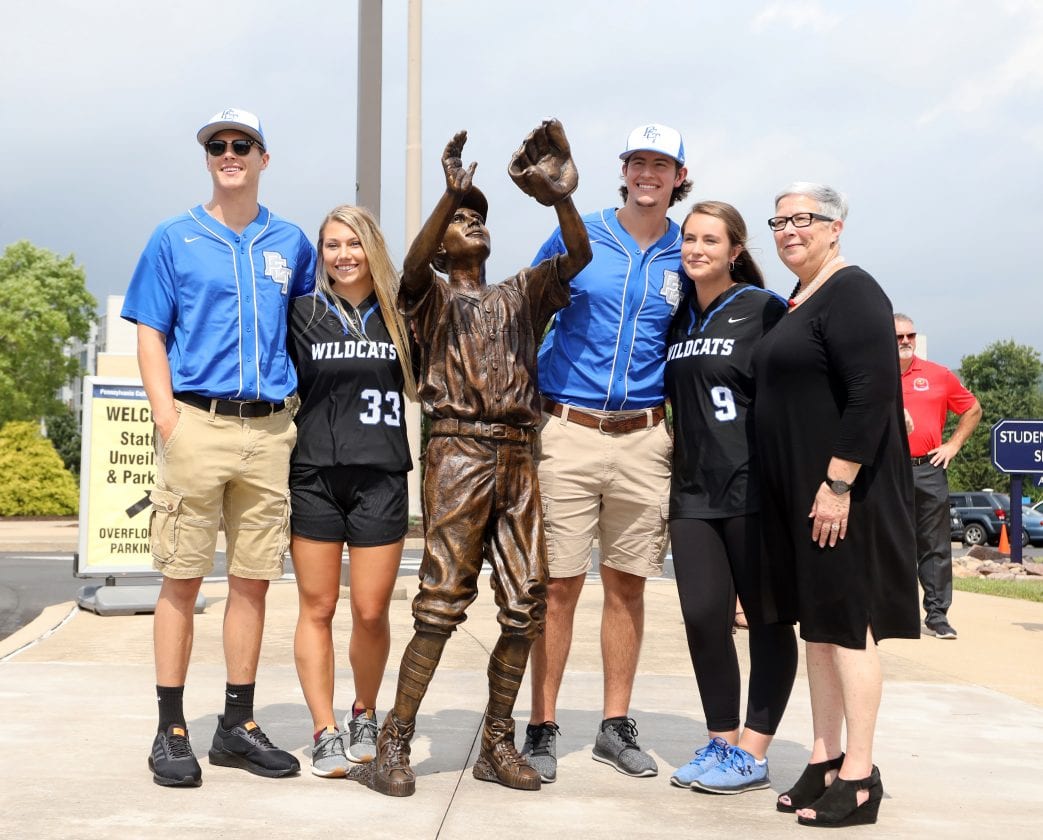 The first installment of the Bases Loaded statue project celebrated the 75th anniversary of Little League Baseball in 2014. This year, the sixth installment of the project came in the form of a left-fielder placed at Pennsylvania College of Technology, unveiled Friday morning.

“We are here today to unveil the sixth installment of our Bases Loaded statues,” said Jason Fink, president and CEO of the Lycoming County Chamber of Commerce. “It’s a series of statues being commissioned by the Lycoming County Visitors Bureau to mark the significance of Little League Baseball in our community.”

This statue will be the last fielder position to be unveiled, as the pitcher, shortstop, right- and centerfielders already have been placed.

“This year we will be unveiling the final fielder position, our left-fielder,” Fink said. “The Bases Loaded project is an example of the Visitors Bureau creating a new destination project that, once completed, will take people to various places while touring our community. While touring the statues, they will be more inclined to discover new places here.”

Penn College students Nathan Holt and Max Conrad, baseball players, and Gillian Sinnott and Olivia Hemstock, from the softball team, removed the drapes to unveil the statue to the public.

“I’d first like to thank the team of people here at Penn College that made this happen,” Dr. Davie Jane Gilmour, former chair of Little League board of directors. “It is a really incredible opening to our campus. This is an important part of our community.”

With that everyone applauded and gathered to take pictures to remember the history of the project as it will soon culminate.

The project started with the first 10 statues placed in Market Square followed by the unveiling of the pitcher, placed at the Original Field on West Fourth Street in 2015.

In 2016, the shortstop was placed and unveiled at the plaza behind the Trade and Transit Center II.

The right-fielder was set at BB&T ballpark at historic Bowman Field in 2017 and, last year, the center-fielder was placed at the UPMC Susquehanna Williamsport Hospital campus.

The project is set to finish in 2021 with the 75th Anniversary of the Little League World Series and the plans for that statue are yet to be decided.

“Lycoming County is blessed to have an abundance of tourism assets that we are proud to share and Bases Loaded will add to the list,” said Amy Brooks, chair of the Lycoming County Visitors Bureau. “We are excited to share the baseball legacy and our heritage through the Bases Loaded project and hope that everyone can appreciate it.”