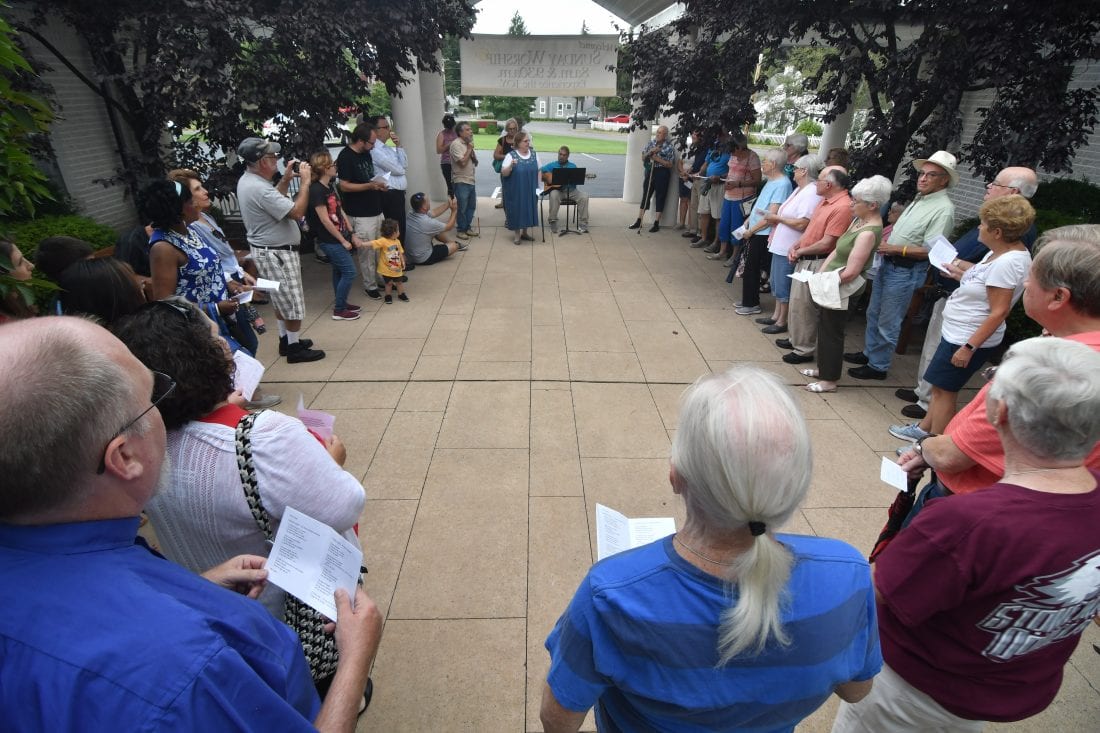 MARK NANCE/Sun-Gazette Members of the community sing "Let There Be Peace on Earth," during a Community Prayer Vigil at St. Luke Lutheran Church Thursday.

They stood some-50 strong at St. Luke Lutheran Church late Thursday afternoon, praying for peace and love in the wake of a series of shootings which have rocked Williamsport in recent weeks.

Forming a circle inside the city church, people took turns offering up prayers. They sang “Let There Be Peace on Earth” and “If I Had a Hammer.”

“I am really pleased to see everyone here,” said Sue Fulton, who heads up the group Moms Demand Action. “It’s been a tough time for Williamsport.”

Fulton was among those who offered up a prayer during the vigil.

“We pray for mercy and love,” she said, asking for wisdom to guide everyone.

Danesta Whaley, executive director of Yokefellow Prison Ministry, gave thanks to the Lord for bringing everyone together.

“God will bring healing,” she said. “We thank you that you call us to pray.”

Lou Kolb, of Williamsport, offered up blessings for the many visitors who will descend upon the area for the Little League World Series next week.

“Keep them from harm and danger,” he said.

Barbara Hemmendinger, of Williamsport, gave a prayer for the emergency responders who help “lift up lives.”

“We have an epidemic of gun violence,” she said.

Another person evoked the name of the late Father John Manno, a local and beloved priest who passed away earlier this summer.

“We feel the wonderful spirit of John Manno with us,” he said. “He would be here.”

The prayer vigil was held to heal the community following the recent local tragedies, but also to recognize those in need of prayer in places such as Texas and Ohio, where people also are reeling from recent gun violence.

The Rev. Gwen Bernstine, executive director of United Churches of Lycoming County, said it was wonderful to see people turn out for the solemn but uplifting event.

The prayers, she said, helped people think of issues they might not normally have considered.

“Many people came out and joined in prayer,” she said. “We got a wide spectrum of folks from the area, so that was good.”