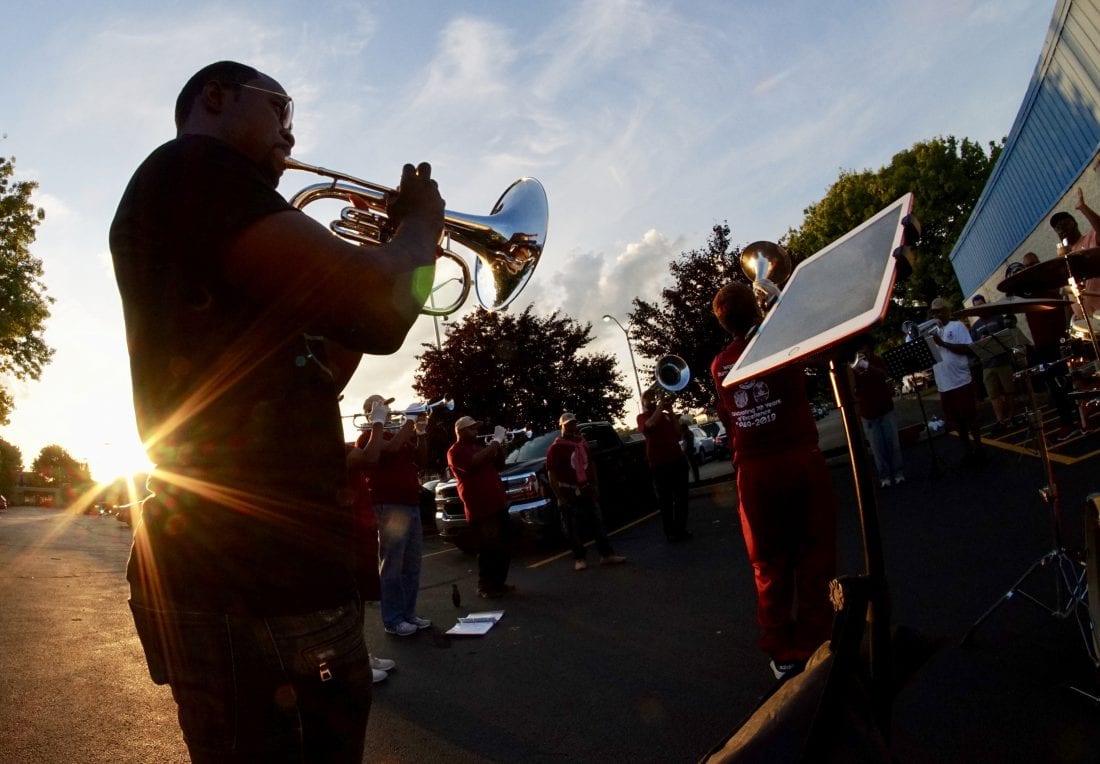 KAREN VIBERT-KENNEDY/Sun-Gazette The Warriors Drum and Bugle Corp from the Bronx and Harlem, NY, practice in the Hepburn Street parking lot on Friday evening. The group is in Williamsport to compete in this weekend's Drum Corp Associates (DCA) World Championships.

With the echoes emanating from hundreds of percussion and brass players practicing in the city and outlying communities, the Drum Corp Associates’ World Championship kicked off Friday.

Allen Buell, president of DCA, thanked residents for their hospitality at a news conference.

“We couldn’t do this without you,” he said.

It wouldn’t be possible for thousands of people to enter into a community if people were not welcoming, said Buell.

“We appreciate the cooperation of the city, the school and the drum corps,” he said.

With having the DCA World Championship in Williamsport for the second year, Jason Fink, president and CEO of the Williamsport/Lycoming Chamber of Commerce, said it’s a chance to deepen relationships that were built last year.

Although the chamber is expected to designate practice locations, some drum corps participants already found their favorite spot the year before.

“Those of you who got the opportunity to experience what downtown was like last year — it was phenomenal,” said Fink. “We’re looking forward to be able to have that again here, not only out on the streets but also inside the beautiful Community Arts Center and the Williamsport Area High School.”

The drum corps members are athletes, he said.

“They are folks who are dedicated to this and put in a lot of time and effort,” said Fink. “They are very skilled in what they do and it’s definitely a top performance event that people are going to be able to see when they come here.”

The Hawthorne Caballeros, of New Jersey, are an alumni drum corps who said they have what it takes to win.

The color guard was practicing in the AMC Theater parking lot.

“It sounds conceited but we’re just so good and we’ve been doing this our whole lives,” said Ann Leib, a member. “This is the group that is a crowdpleaser.”

They’re competing to win, but Leib said all the groups deserve credit.

“It’s just amazing how talented these guys are,” she said. “It’s a huge commitment to come here.”

Meanwhile, the Fusion Drum Corps, from Morristown, New Jersey, was practicing at the Lycoming College field near Market Street.

Though their group filled the lawn, Joe Sassano, staff organizer, said it was still outsized by others.

This year their corps is taking a more patriotic turn.

“The Corps itself has matured very well,” he said. “The show we’re doing is called ‘The Purple Heart’ and it’s geared to every recipient that ever received the Purple Heart.”

The residents of Williamsport have been great, he said, adding he appreciated the city opening up for the competition.

This corps was practicing at Roundtop Field.

“We’re really trying to make a name for ourselves in the DCA community,” he said.

Performing for others is exhilarating.

“It’s the most exciting thing I’ve ever been able to be a part of. It makes me, personally, feel young at 33 years old.”

“People here have been very inviting and polite. It’s been a welcoming community,” he added.