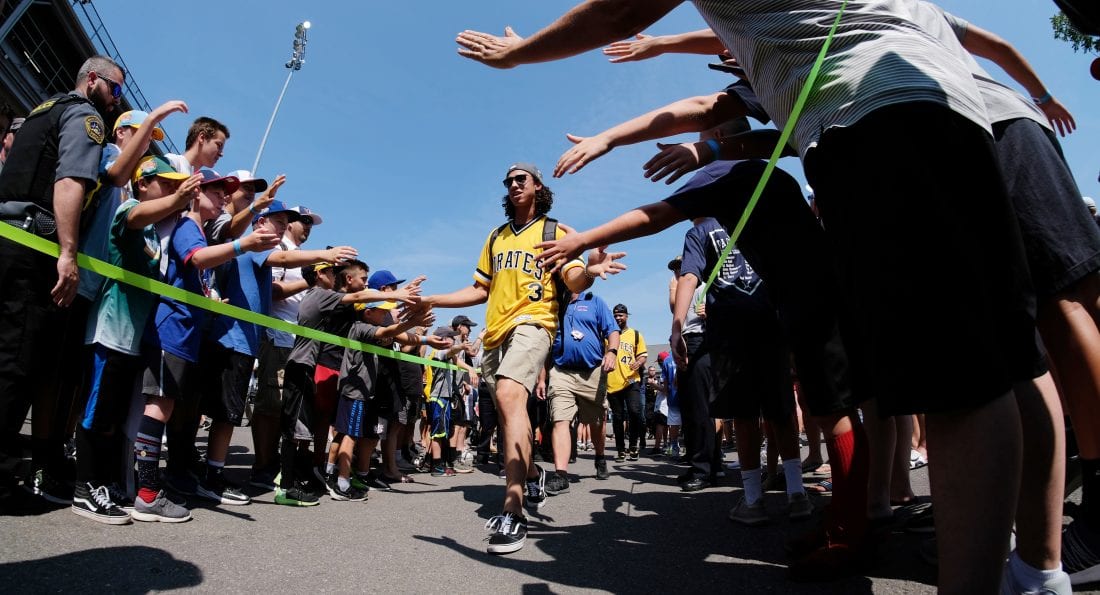 Pittsburgh Pirates' Cole Tucker slaps hands with fans as he and his team walk into the Little League complex in South Williamsport Sunday afternoon. DAVE KENNEDY/Sun-Gazette

Little League teams not taking the field Sunday traveled to the Williamsport Regional Airport to greet players from the Pittsburgh Pirates and the Chicago Cubs when they arrived to play in the 2019 MLB Little League Classic at BB&T Park at Historic Bowman Field.

The welcoming event might be enough to satisfy any player talented and fortunate enough to compete at Little League’s highest level, but the players also accompanied their heroes to the Little League complex by bus from the airport. Also riding along were the team mascots, Pirate Parrot and Clark the bear cub.

The Pirates arrived first, followed by the Cubs about an hour later.

The Little Leaguers walked up the hill behind Volunteer Stadium to the concourse together with the MLB players to the delight of the crowds waiting for them at the top of the hill.

For the Little Leaguers, it would be a taste of what life could be like if a future dream might come true: Crowds cheering, fans holding baseballs high in the air to attract the attention of their favorite players and lots of requests for autographs.

Teams on the field yesterday also got a treat. In a sweet reversal of roles, the Major Leaguers watched the Little Leaguers play ball.

For the MidAtlantic champions from Elizabeth, New Jersey and West champs from Wailuku, Hawaii, MLB’s Alan Porter provided umpiring services on the bases.