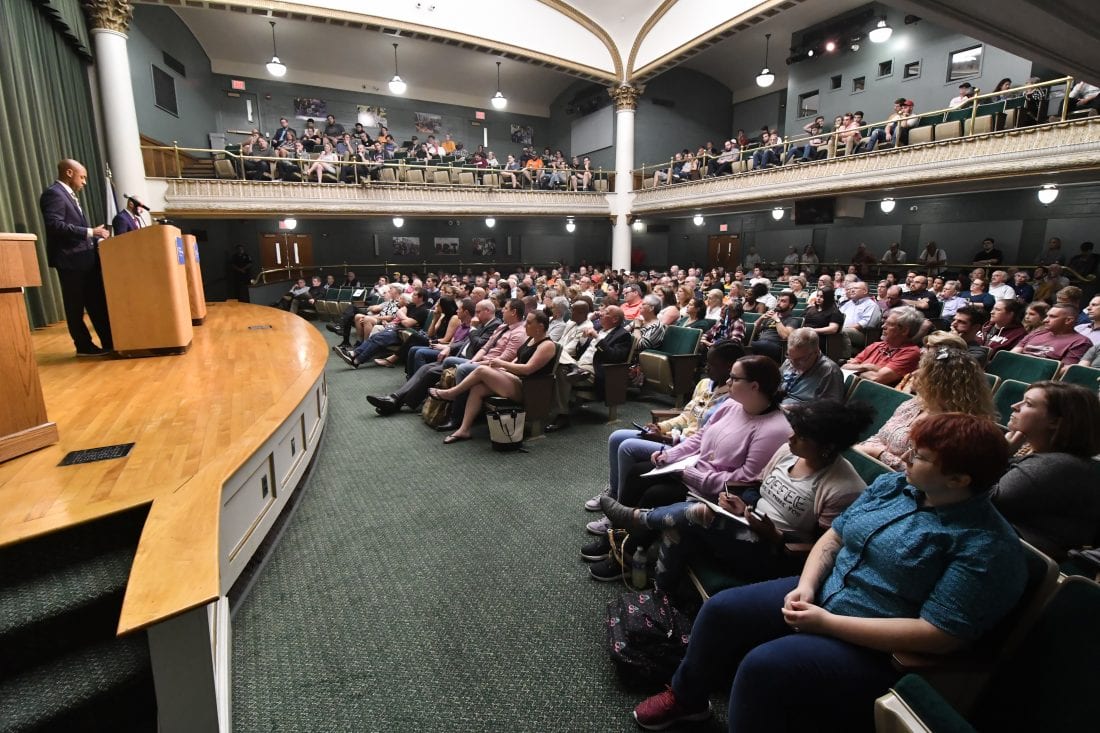 MARK NANCE/Sun-Gazette Klump Auditorium at Pennsylvania College of Technology is standing room only during a mayorial forum Tuesday.

Williamsport’s two mayoral candidates hammered out their ideas on how best to provide a safe city that grows economically in their first debate.

“We need to put our financial house in order,” said Derek Slaughter, a Democrat city councilman.

“We need to stop looking in the mirror and look out the window,” said Eric Beiter, a Republican businessman.

Each had what might be signature phrases of the night.

“You can’t give empty promises,” Slaughter said, adding, “if you don’t know what is in the budget.”

Beiter said he’d use his business skills and experience dealing with people in the private sector as mayor and a promise to incorporate a new vision that included ideas such as regionalization of departments and reinvestment in city parks.

No matter what the city remains “resilient,” he said, adding the city can’t be that without the “right leadership.”

“Williamsport can be a pillar in Lycoming County.”

Slaughter, on numerous occasions chastised the city administration for not turning over or providing accurate finances.

“We don’t know what we have,” Slaughter said, explaining why he voted against the $25 million budget that carried a .65-mill tax hike.

“I am probably the most hated fiscal conservative on council,” Slaughter said to a smattering of laughter.

Beiter also questioned some financial decisions by the administration. He specifically wondered why the city recently settled a lawsuit with police officers and through insurance paid $150,000 to settle the claim.

Slaughter lauded the current police Chief Damon Hagan. He said he appreciated Hagan for leading a department that handled a summer that included solving a case of an alleged terroristic threat made to City Hall employees and violence and shootings that galvanized the community against further violence.

He said the city police and the administration were doing a “phenomenal” job, but, again, brought up how it boiled down to finances to get more accomplished.

Miller asked a question of candidates related to community policing.

Beiter said community policing was not just about putting officers in neighborhoods. Rather, he said, it was about bringing in the media, non-profits, businesses and others into the program and building trust among the police with the community.

“It’s not as simple as putting an officer on the street,” Beiter said.

Slaughter said he had been on rides with police but he said such initiatives can’t happen when there are 47 to 48 officers when there were 51 and when there are three to four officers available at times on a shift.

As for fire regionalization, Beiter said, Old Lycoming Township and city formed an alliance 20 years ago. He noted how the city needs to remain the envy of all the other departments, but he said with the average age of volunteers 55 years old and accreditation requiring 200 hours of classes, the city would need to validate why it would be the department that would lead to such proposed consolidations.

“We are effective, given our restrictions,” Slaughter said of the fire department numbers, limited to 30 with three command staff.

Beiter said the downside to regionalization would be ballooning cost and Slaughter said the discussions have begun but the financial house must be in order.

The issue of body cameras on police was asked of the candidates.

Beiter said these can provide the “best record” and “protect citizens” and Slaughter said it comes down to money.

Slaughter reminded the audience he’d been on council since 2018 and was on the finance committee.

“We have not foreseen that money in the budget (for cameras),” he said, adding that while desired it was “pie in the sky,” and what is more needed are replacing outdated radios.

“Not another dollar on City Hall,” Slaughter said.

“You can’t continue to borrow and pass the responsibility on to the taxpayer,” Slaughter said.

Even if the ramp upgrades are done, he said, it is a “money pit” that requires millions of dollars to make accessible.

Beiter noted the lagging action on the building. “Here we are 40 years later,” he said.

Both men support moving out of City Hall, with Slaughter saying the best short-term decision would be working with county officials to find the right location.

Beiter also believed in such a move, but noted that a public safety building combining county public safety officials should be pursued.