Commissioner candidates get specific on stances 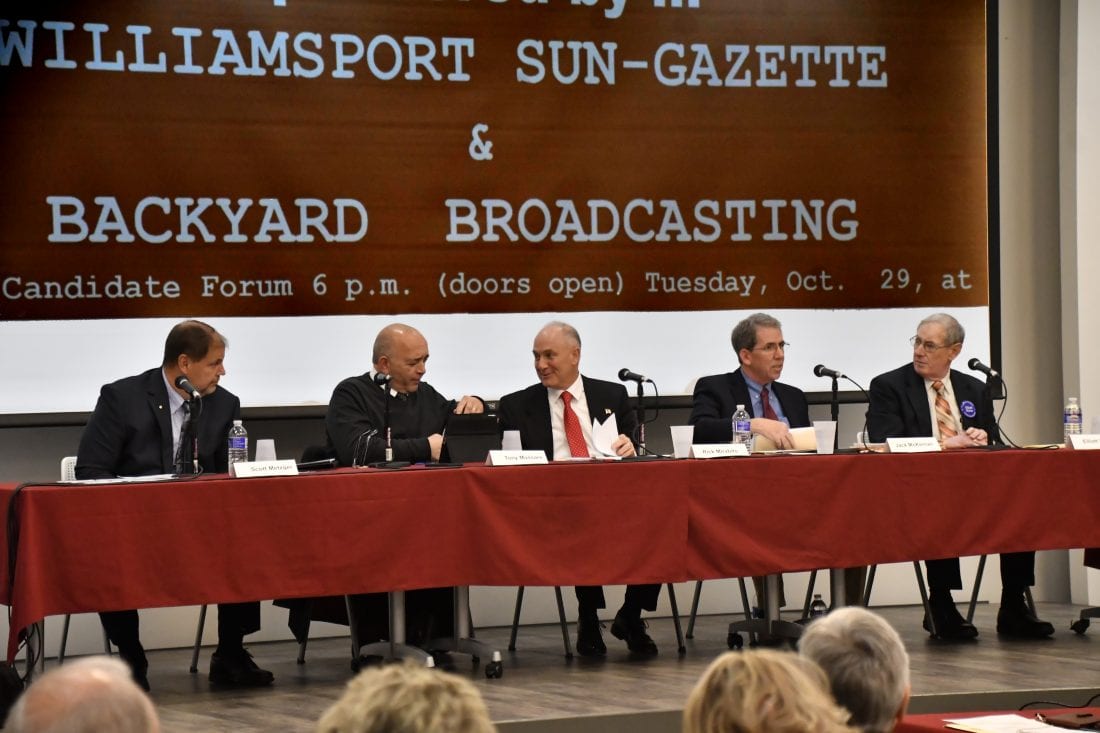 Five candidates for Lycoming County commissioner talked about what is right and wrong with county government and why voters should elect them to one of three spots up for election.

Each of the participants in the forum sponsored by Williamsport Sun-Gazette and Backyard Broadcasting at the Trade and Transit Center II in Williamsport answered questions on a number of issues and also gave opening and closing statements.

In his opening statement, Mirabito, an incumbent, noted his four years as commissioner and three terms as a state legislator.

He talked about how his values were shaped by his mother, who raised him and his siblings.

“I understand the struggles of our families,” he told the audience.

He noted also his business background.

Metzger pointed to his three decades working in county government as well as his experience as a small businessman.

“County government is broken,” he said.

Metzger said the three R’s of reform, restraint and repair are needed. He noted the increase in taxes of recent years and the need for an orderly budget process.

McKernan, who is staging a write-in campaign to hold on to his seat after finishing third in the Republican primary, said he has kept to his pledges he made when he first ran for commissioner four years ago — including reducing county spending.

As a businessman, he said he has learned how to figure out problems.

Weiss said county commissioners must be responsible for economic development.

He noted his experience as an attorney and his involvement with non-profit organizations.

Mussare, an incumbent commissioner, said, “Effective government can only happen with the engagement of citizens.”

He said as a commissioner he is engaged with people.

Each of the candidates addressed the question of regionalization of police, fire and public services.

Mussare said there exists a crisis simply in the cost of educating emergency responders. He said he’s hopeful that pending state legislation may be able to ease that burden.

Mirabito said the county needs to act in a leadership role in addressing regionalization. Unfortunately, many people may be opposed to regionalization because they are afraid of losing control and incurring costs.

State police, he noted, in some cases can help provide law enforcement to communities without their own departments.

Metzger noted that volunteers are few and far between.

“We have to find what municipalities want it (regionalization),” he said.

He noted that commissioners can help bring communities together to consider the issue.

The shortage of volunteers has raised the discussion level on the issue, he added.

The question of how to improve county court and prison operations was posed to the candidates.

He noted the inmate population is down, but the prison does experience a high employee turnover rate.

“We wish we could get people to stay,” he said.

Weiss called for electronic filing in the court system and better resources for prison guards.

Metzger said there is zero communication between the judges and commissioners.

“We have to communicate with the courts, first of all,” he said.

Metzger said there exist strategies to save court costs that aren’t utilized.

“We have no control on how they operate the judicial system,” Mussare said.

Regarding prison costs, he said the county’s GEO re-entry program for criminal offenders has reduced jail overcrowding and saved the county money.

Mirabito said inmates with mental health problems are not properly cared for. The money spent for GEO might have been better used to address that issue, he added.

Candidates were asked how the county’s share of impact fee money from natural gas drilling can be used to better the lives of county residents.

Weiss said the money is best spent for economic development, including for low interest loans.

Metzger called for spending the money for better infrastructure.

“That’s how you bring good jobs here,” he said.

Mirabito said infrastructure improvement through the leverage of impact fee money is ongoing. The Williamsport Regional Airport, the river levee, water and sewer system projects, and broadband expansion have all been recipients of the funding.

With regard to where the county is headed in the next four years, Mussare said, “Some people say the county is in bad shape. Well, I’m going to tell you that is hogwash.”

The focus, he said, needs to be on how to improve the county.

Mirabito noted that Lycoming County is experiencing a population decline while placing 64th among the state’s 67 counties in personal income growth and 65th in per capita income.

He called for economic development.

“The sky is not falling,” McKernan said.

He said surrounding counties are not in as good economic shape as Lycoming.

Weiss pointed to a 36 percent increase in county taxes in the past four years and the declining population.

“It’s time to grow jobs in Lycoming County,” he said.

Candidates addressed the issue of including more women in county government.

“We have to appoint people outside our comfort zone,” he said.

He called for meeting with the National Organization of Women to make that happen.

“We absolutely have to increase the number of women on county boards,” Weiss said.

McKernan said there will exist openings on county boards in the near future.

“One problem is getting people to come forward,” he said. “We aren’t looking at race or gender.”

Mussare said he would consider appointing Linda Sosniak, who applied for but was passed over by himself and McKernan for a vacant seat on the planning commission earlier this year. Instead, a man who did not apply for the vacancy was appointed.

“We appointed the most qualified person for that position,” he later said.

Metzger said an action plan to address the issue of appointing more women to boards needs to be in place. He also called for updating various county policies.

“Sixty-two percent of county employees have either retired or left,” he said. “That is a problem.”

Candidates addressed the role commissioners need to take with regard to citizens and state issues.

Metzger said it’s important to not only talk with but listen to local lawmakers.

“We have to meet with them on a regular basis,” he said.

Mirabito said meeting with both state and federal lawmakers is part of the job of commissioners.

Regarding plans for Lycoming County becoming more environmental friendly, McKernan said, “We are going green by changing our light bulbs one at a time.”

He noted the sales of methane gas produced from waste at the landfill and energy efficient windows at the courthouse.

Weiss said it can mean encouraging more businesses about the benefits of using renewable energy.

“We can ask businesses to limit waste. Green energy can be used to grow the economy,” he said.

Metzger said he has no specific plans, but noted that it’s important to maintain the beauty of Lycoming County, where hunting, fishing and tourism are important.