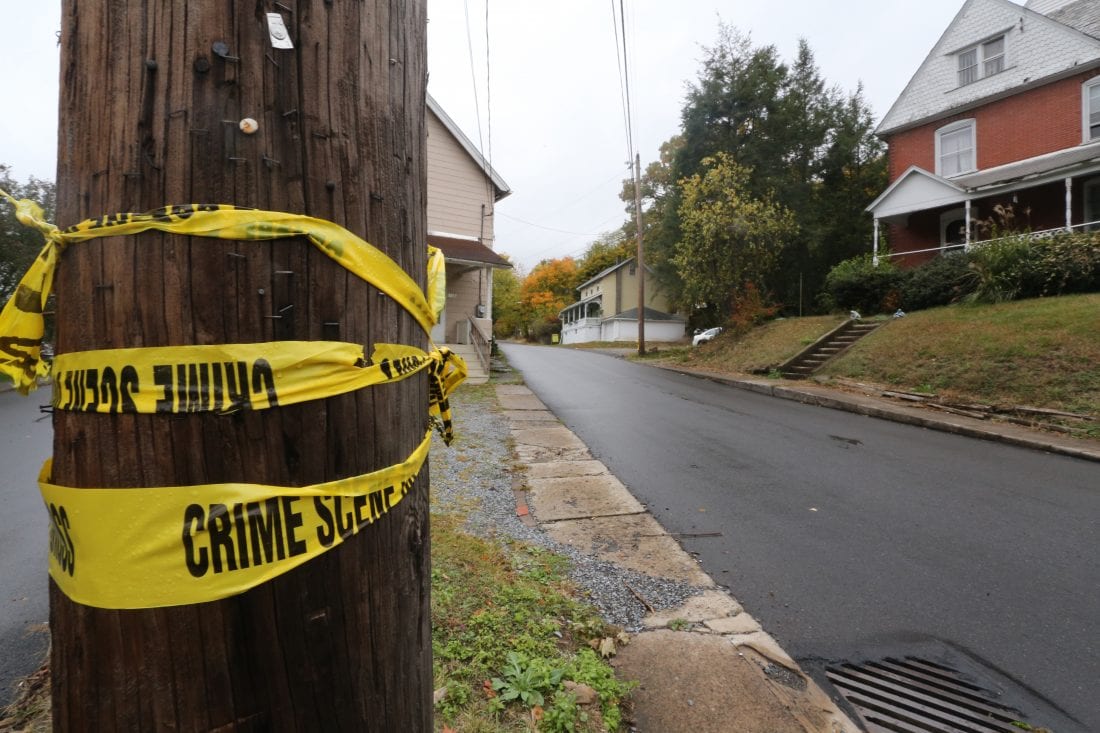 KAREN VIBERT-KENNEDY/Sun-Gazette Crime scene tape on a pole at the corner of Hillside Avenue and Newberry Street near the 2100 block of Hillside Ave, where a shooting took place on Monday night.

A little more than two hours after a man was shot outside his home on Hillside Avenue on Monday night, a vehicle parked behind a home in the 2500 block of West Fourth Street was shot at multiple times, city police said.

“There is nothing at this point that leads us to believe that the two shootings are related,” Agent Jason Bolt, the lead investigator for the two cases, said Tuesday afternoon.

Clearly the vehicle was “targeted,” struck more with dozen times, Bolt said. No one was in the vehicle at the time and no one was injured, the agent said.

The shooting in the 2100 block of Hillside Avenue occurred just before 9 p.m. and sent a man, believed to be in his early 40s, to the Williamsport Regional Medical Center, where he was treated for a non-life threatening gunshot wound, police said.

Bolt said officers responded to the 2500 block of West Fourth Street to investigate a report of shots fired shortly after 11 p.m., but did not find anything initially.

About 15 minutes later, officers responded back to the scene, about six blocks west of Hillside Avenue, after a man came out of his home and discovered that his parked car had been shot up multiple times.

Part of the back window of the man’s car had been blown out.

Investigators are looking into the possibility that the car may have actually been hit with pellets.

“Whether it’s pellets or not, at this point, we’re classifying the incident as a shooting based on the projectiles. It’s all under investigation,” Hagan said.

“We’re following up on leads, and we don’t know if they (the two incidents) are related,” he added.

Some Newberry residents were shaken by the late-night violence.

“You don’t have any idea where or when the next shooting is going to occur,” a woman in her 70s who has lived her entire life in Newberry, said.

“When it becomes dark, my doors are locked because you don’t know who is out there walking the streets anymore. You don’t know what they are going to do,” the woman said.

The amount of guns on the streets these days “is just awful,” she added.

In addition to the two shootings Monday night, Newberry has been the scene of at least two other recent acts of violence, including the slaying of 48-year-old Rhonda McPeak, who was shot to death during a robbery at the Uni-Mart, 1944 W. Fourth St., on Aug. 4.

Having bought a snack, McPeak was on her way out when a gunman entered the store, pulled her back in and held up a female clerk.

The alleged gunman, I-Keem Fogan, fired one shot and wounded the clerk and then pointed the handgun at McPeak, shooting her in the chest. McPeak was pronounced dead at the scene while the clerk was rushed to the hospital. She is recovering from her injuries. Fogan is jailed and awaiting trial.

On a sunny Friday afternoon last month, two men were playing basketball outdoors at Wildwood Boulevard at High Street when a car drove by.

Suddenly, gunshots were fired from a passenger, later identified as Kavaughn Williams, nearly striking the two men and a third man who was standing next to the basketball hoop. The car sped away.

Williams was arrested and remains jailed on three counts of attempted homicide. He was recently held for court on all the charges stemming from the Sept. 20 shooting after the driver of the car testified against him at a preliminary hearing.

“I really feel like we live in a warzone,” the Newberry female resident said.

Another Newberry female resident said “It certainly is getting there,” referring to the spike in violence in her neighborhood.

This 31-year-old woman said she heard the gunfire that was fired at the man’s parked vehicle off of West Fourth Street.

“I heard boom, boom, boom boom,” the woman, said. She too did not want her name published.