Haunted Barn back in Pennsdale 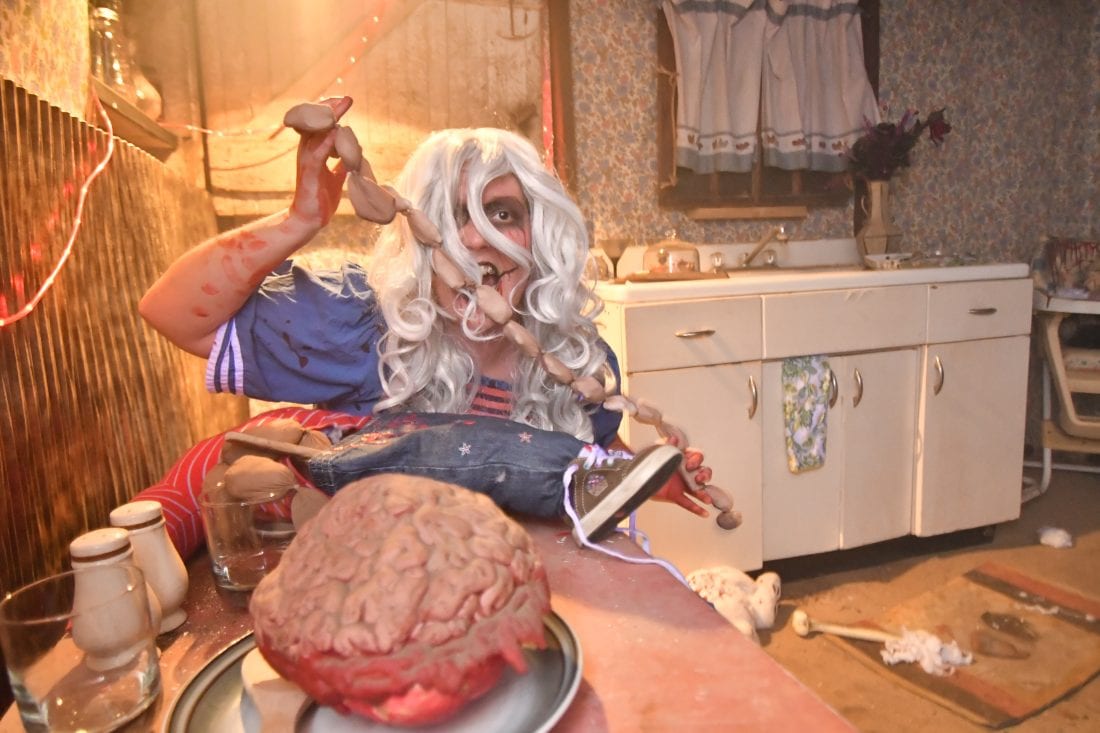 Brittany Gordner of Williamsport is briefly interrupted from her dinner by visitors to the Haunted Barn during a preview tour Thursday night. The Pennsdale Haunted Barn is open from 7 to 11 p.m. on Saturday October 12, 19 and 26.

The deceptively small barn brings big scares by the Pennsdale Volunteer Fire Co., which some visitors call the best in the area.

Going into its ninth year, Dawn Palmatier, an organizer, said 25 to 30 workers offer their services to operate the Pennsdale Haunted Barn, at 261 Village Road. The money raised from the event goes to support the fire company.

“We like to exceed people’s expectations,” she said. “When a lot of people come they don’t expect what’s inside.”

The haunted barn evolved from an “all out” Halloween party more than a decade ago, said Palmatier, before arriving at the structure adjacent to the fire hall.

As far as revealing the features, she said, “We try to contain our secrets for everybody,” but social media feedback and ideas derived from attending other haunted attractions have steadily enhanced the barn.

“Each year we change different things around, some things or a part might be the same, but we try to change things up,” she said, utilizing “every inch of the barn that we can.”

Boyd Hartman and Chrissy Lucas were able to take a walk through the barn earlier than most.

“It was very good, pretty long too and very elaborate,” said Hartman. “It will be awesome with more people going through.”

Having gone to other haunted attractions in the area, the Pennsdale Haunted Barn is better than many others, he said.

“They did really well and planned it out well too,” he said. “I think it’s worth coming out here… come out and support, it was worth it”

Enjoying horror films since a young age with her older sister, Lucas said “I love creepy stuff, It’s the best.”

Helping make some of the creepy stuff happen is Andrea Pettiback, who was dressed in torn clothing and gauze-infused makeup.

“They make our rooms and then we make our rooms our own,” she said. “We aren’t given a script of what to say, it’s like whatever we can come up with while we’re sitting in there before everyone comes in.”

The set up allows for each scarer to bring their best ideas and add a unique quality to the haunted barn, she said.

With more than seven years of experience another volunteer said he’s been able to see the barn grow.

“The amount of people that we’re putting through the barn is incredible, because we went from doing only maybe 100 to 300 people,” he said.

The rooms and number of volunteers have expanded as well.

“I love being able to do it every year — it’s enjoyable, it’s fun to scare people,” he said. “It’s all sorts of fun. It’s a great group of people.”

The Pennsdale Haunted Barn runs from 7 to 11 p.m. each Saturday leading to Halloween, starting tonight. The organizers suggest participants be at least 12-years-old.

A hayride and Faddies food truck will also operate at those times.