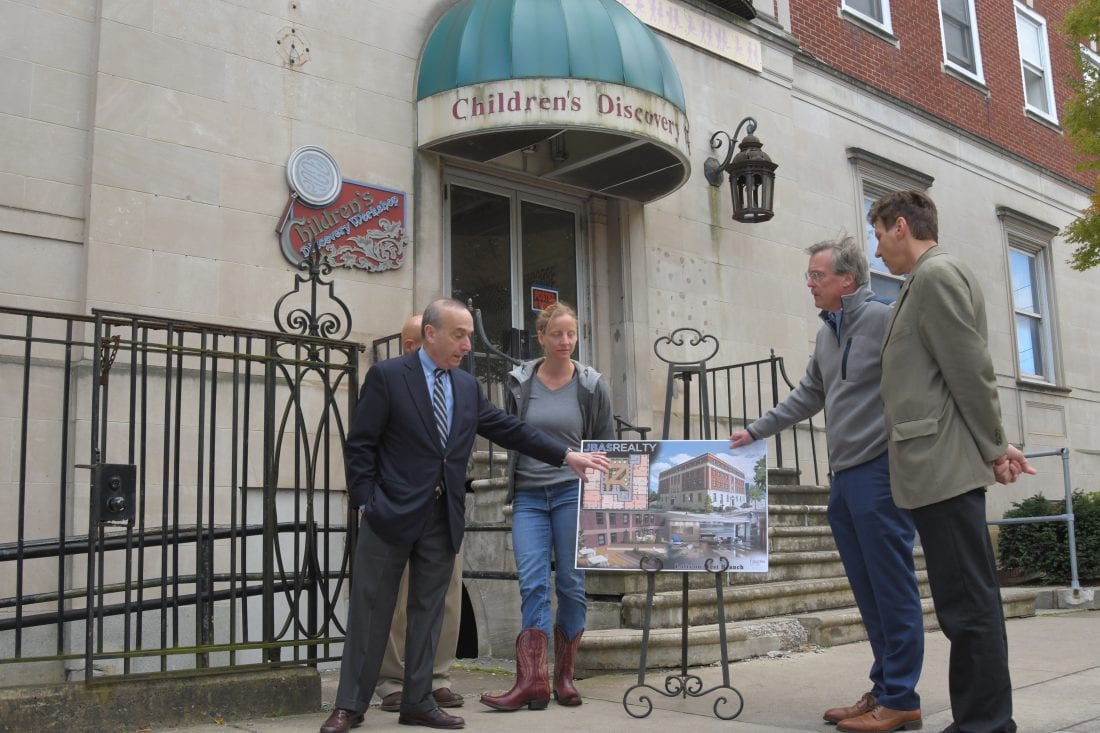 RALPH WILSON/Sun-Gazette Correspondent Detailing plans for the renovations of the former YMCA building are from left, John S. Palumbo, architect, Randall Allison and Liz Miele, Williamsport council members, Chris Doherty of JBAS Reality and Mayor Gabe Campana. The historic building at the corner of West Fourth and Elmira Streets is to be converted to market-rate apartments ranging in size from approximately 750 to 1600 square feet. JBAS Reality is developing the property along with The Palumbo Group, an architectural firm in Scranton.

Ground will soon break on a new apartment complex, “Lofts of West Branch,” to be developed and owned by John Basalyga, of JBAS Realty, Jessup, at the former YMCA at 343 W. Fourth St.

The $4 million investment will hold 30 units varying in sizes from small studio apartments to one- and two-bedroom family apartments, between 750 and 1,600 square feet, according to Chris Doherty, former mayor of Scranton, who helped facilitate the deal.

JBAS Realty is developing the structure alongside The Palumbo Group, an architecture firm out of Scranton.

Construction will start in 2020 and be completed by the end of the year, said Doherty.

John Palumbo, with the architecture firm, said the coming apartment building will be complete with a gym, guest lounges and a second-floor atrium garden.

“We are confident that they are going to be successful,” Doherty said.

The two added that the apartments available will be varying in size due to the use of an existing building paired with an existing parking lot and street parking.

“It’s a beautiful building. It’s the gateway to our historical district,” Liz Miele, vice president of city council, said of the historical structure at the corner of Fourth and Elmira. “We have a need for high quality, new or renovated housing.”

These “market rate” units are said to have price, size and quality comparable to other units in cities like Danville, Lewisburg and Scranton. The units are said to be priced anywhere between $900 and $1,100 monthly according to Palumbo.

“Without John and Chris’s vision, this space would have been a parking lot,” Liz Miele, city councilwoman, added.

Built in 1923, the building originally served as a boy’s dormitory for children at the YMCA. The upper levels were staff offices while the lower floor was known as the Children’s Discovery Workshop, providing educational programs for youths.

The building has been empty for a number of years, with River Valley Regional YMCA officials collecting its cornerstone in early 2016 to open a time capsule that had been hidden away inside in 1922 — part of the local organization’s 150th anniversary.

Because of damage and disrepair, the building was on the path to being demolished. However, Miele and other supporters stepped in, calling the former Y a historic landmark.

Herman Logue, a Montoursville-area developer bought the building from Daniel Klingerman, of The Liberty Group, and held off on any form of development or demolition while Miele worked to find other developers willing to put the millions needed into renovating it.