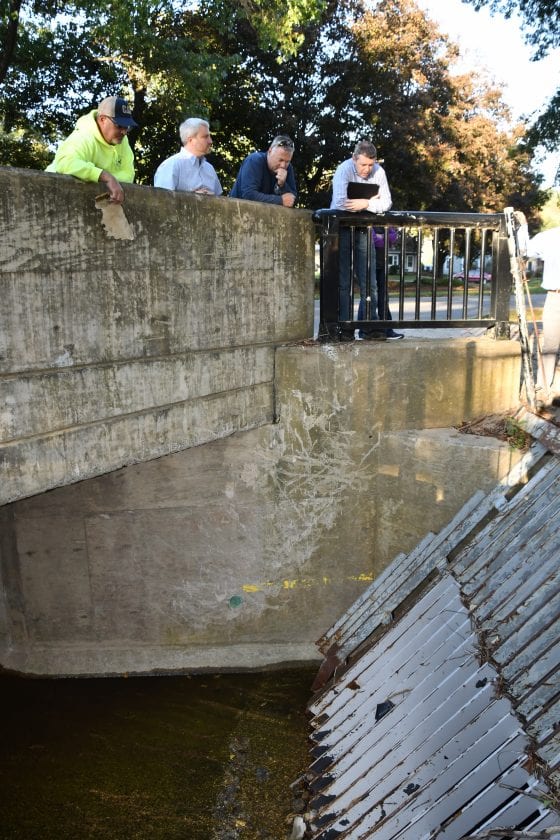 MARK NANCE/Sun-Gazette Patrick McDonnell, secretary of the PA Evnironment Protrection, right, examines the trash rake on Grafius Run at Highland Terrace Road during a tour of the creek Tuesday.

More than 60 residents welcomed a visit by the state Secretary of the Department of Environmental Protection Tuesday, as he looked for solutions and funding for Grafius Run flood mitigation.

“We have got to take the energy and the volume out,” said Patrick McDonnell, to a large gathering at the parking lot of St. Luke’s Lutheran Church, a house of worship at 1400 Market St., which is often hit by flooding of the run which flows inward from Loyalsock Township.

McDonnell department staff stated he is on a three-day tour of problem areas in terms of stormwater drainage issues. Grafius Run is on the top of the list.

McDonnell’s tour came during a time when the run was tame.

“A lot of what we’re talking about it is a sea change,” McDonnell said, referring to how citizens are going to have to find solutions and seek funds to control stormwater runoff.

“We need to design systems to get water into the streams,” McDonnell said.

He cited an initiative in Lancaster County, which has farmland pollution and has created wetlands for the run-off to be retained.

“We have a lot of these challenges,” McDonnell said “… it will take a lot of work in different areas.”

Grafius Run is a miserable neighbor. It splits and flows down a mountainside entering the city, where it goes underground and eventually discharges at Hepburn Street pump station and into the West Branch of the Susquehanna River.

Whenever there are several inches of rain in a short period, water flows down from properties, many of which include housing developments to the north.

The water doesn’t get into the ground but flows off concrete slab driveways and pavement.

It gathers speed and force because it flows down and collects debris and trash that blocks trash racks where the channel goes underneath ground at Highland Terrace and near Market Street.

“The result is the overflow of the run onto the nearby streets as the drainage system is overwhelmed,” said Adam Winder, general manager of city streets and parks department, which has to man equipment such as a log picker vehicle when the debris gets bad.

Often, too, the ground water seeps into the basements and first floor of properties, because of broken or aged stormwater drainage systems.

“We are grateful you are here,” said City Councilwoman Gerry Fausnaught, a resident of nearby Elmira Street, one of those often flooded by the overflow or ground water seepage. “Our hope is in you today,” she said.

The city problem had plagued residents for more than a century, causing property damages over the last decade and untold amounts of damage over the prior years, said Jason Fitzgerald, president of Penn Strategies, the city economic development consulting firm that has worked on calculating those losses for the department.