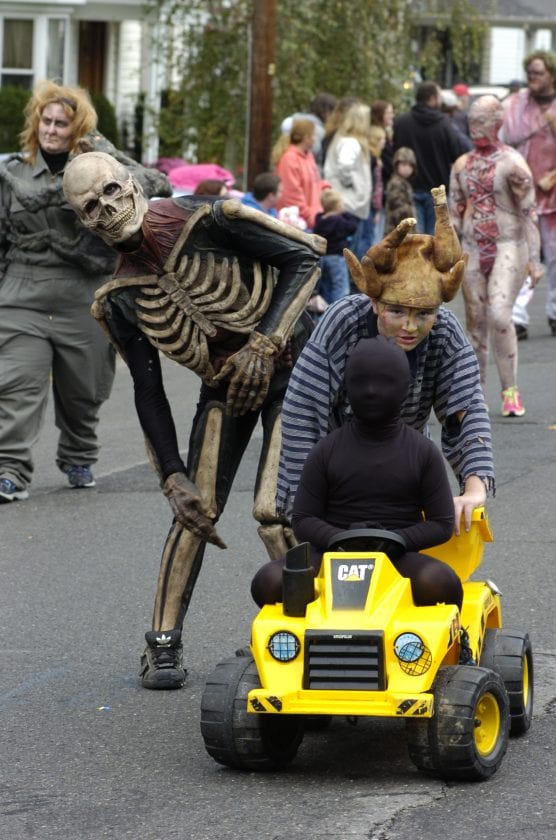 South Williamsport’s streets will become the yellow brick road and the Land of Oz in a week.

The 74th annual South Williamsport Mummers Parade will be an homage to the 80th anniversary of the Wizard of Oz, said Dori Rankinen, parade coordinator.

The parade will will kick off at 2 p.m. Oct. 19 with floats, bands, and many Halloween-themed entries.

“We are tying in with the 80th anniversary of the Wizard of Oz movie,” she said.

“Many of the floats and musical groups will be using Oz-themed art and music.

“There will be several new surprises in store for spectators!”

Among those, a huge witch balloon,” she said.

The Woodland String Band as well as the Nittany Highland Bagpipe Band will be joining the parade again.

Also adding their talents will be the North Trinidad Steel Drum Band as well as a special guest at the very end of the parade — back by popular demand, Rankinen said.

There will be bleachers available at the CVS plaza across from the viewing stand.

T-shirts and sweatshirts will be sold at a table in front of Strobles’ Garage.

“The great thing about the Mummers’ Parade is that it is a generational thing,” Rankinen said.

“Grandparents marched in high school bands that their children, and now grandchildren are marching with for the parade. Families look forward to the parade each year to enjoy a fun-filled, affordable way to spend the day together.”

Some of the features of the parade include the Woodlands String Band of Philadelphia, Nittany Highland Pipe Band and North Trinidad Steel Drum Band.

The South Williamsport Class of 2023 will be selling cotton candy.

Rankinen said a committee works year-round to plan the parade, which will celebrate its 75th year in 2020.

The parade is a volunteer sponsored event and is always looking for interested folks to join up with ideas and energy, Rankinen said.

“We usually meet the second Tuesday of each month,” she said.

She said the group is always looking for new and fresh ideas to plan the parade.