Testimony ties together two city shootings that were hours apart 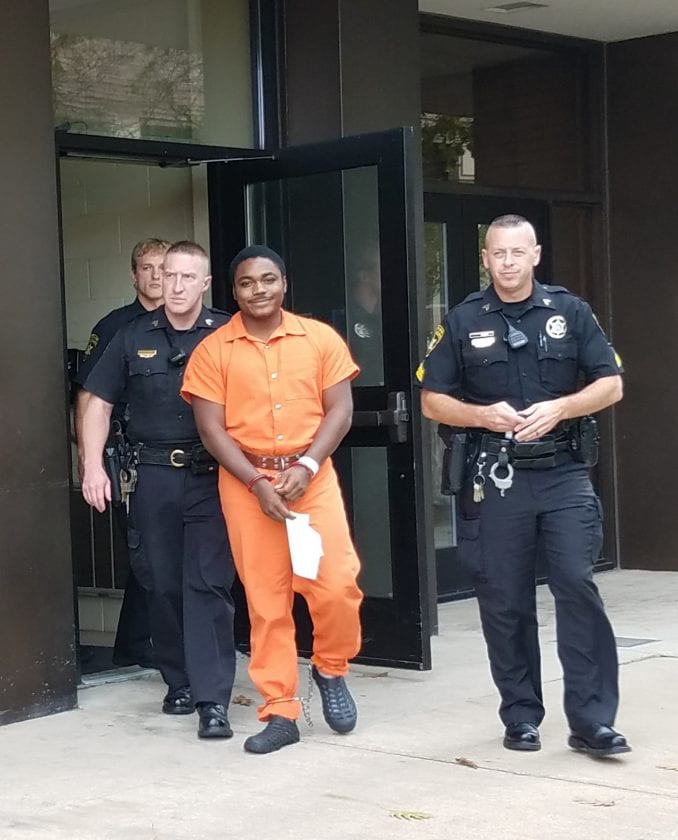 The two city shootings that took place 12 hours apart on Sept. 20 — one at Wildwood and High Street and the other in the area of West Elmira and Fourth streets — appear to be related based on testimony presented Tuesday at Kavaughn Williams’ preliminary hearing.

The testimony came from Daniel Miller, who was driving his Chevrolet Cruze when Williams, a passenger in the car, pulled out a large handgun and allegedly fired at three men at a basketball hoop on west side of Wildwood Boulevard about 12:45 p.m.

“I was screaming and yelling at him, ‘What did you just do,” Miller testified, referring to his startled reaction when Williams allegedly shot at two males playing basketball and a third who was nearby.

Miller testified he sped away, dropped off Williams at an undisclosed location and then went home. Miller has not been charged with any crimes.

No one was injured when Williams allegedly fired at the three males, none of whom have been identified publicly by police.

At the end of the hearing, which lasted less than 20 minutes, District Judge Christian Frey ruled there was sufficient evidence to hold Williams, of 2500 Federal Ave., on all city police charges related to the case, including three counts of attempted homicide, multiple counts of aggravated assault and one count each of possession of an instrument of crime and carrying a firearm without a permit.

Agent Justin Snyder, the arresting officer, testified that four shell casings were found “in close proximity to each other” in the middle of the street and “two bullet strikes” were discovered; one at the base of the basketball hoop and another in an exterior wall to a home behind the hoop.

Surveillance video clearly showed that the gunshots came from the car Miller was driving, but the gunman’s identity could not be determined from the footage, Snyder said. From where the video was taken was not disclosed.

About 12 hours before that shooting, city police rushed to the area of West Fourth and Elmira street about 12:50 a.m. to investigate a report of shots being fired. Initially nothing could be found, but at daybreak, officers found ballistics evidence that they collected as part of their investigation.

On the stand, Miller testified he heard shots at that intersection during the early morning hours of Sept. 20. He told the court that later that same day, he realized one bullet had struck his vehicle.

Miller testified that the shots were fired while he was being pursued by another vehicle. Williams was with him in the car, he said.

The two men had been together at a local drinking establishment, where they encountered some individuals who Miller claimed on the stand were “plotting” something. Miller testified that after he and Williams left the place of business together in his (Miller’s) car, Williams received a call on his cellphone.

” ‘We’re being followed, turn here’ (onto Elmira Street),” Miller, on the stand, quoted Williams as saying. As he turned off of West Fourth Street, gunfire erupted. No one has been charged with the first shooting.

While police have declined to say if they have been able to identify or talk with any of the three males who were shot at on Wildwood Boulevard, one teenager, Tahjair Dorsey, told an undercover officer from the county’s Narcotics Enforcement Unit that he was one of the individuals at the basketball hoop when the gunshots were fired.

Dorsey, 18, of Durham, North Carolina, and Rocellus Carter, also 18, of Harrisburg, were taken into custody on firearm violations near Hepburn and Louisa streets on Sept. 23, just three days after the shootings.

When Dorsey tired to flee from police, a handgun, which turned out to be stolen from Georgia, fell from his pocket to the ground. He admitted he was carrying the gun to protect himself “against whoever shot at him at Wildwood Boulevard and High Street,” according to court records.

Both teenagers, along with Williams, remain behind bars at the Lycoming County Prison.