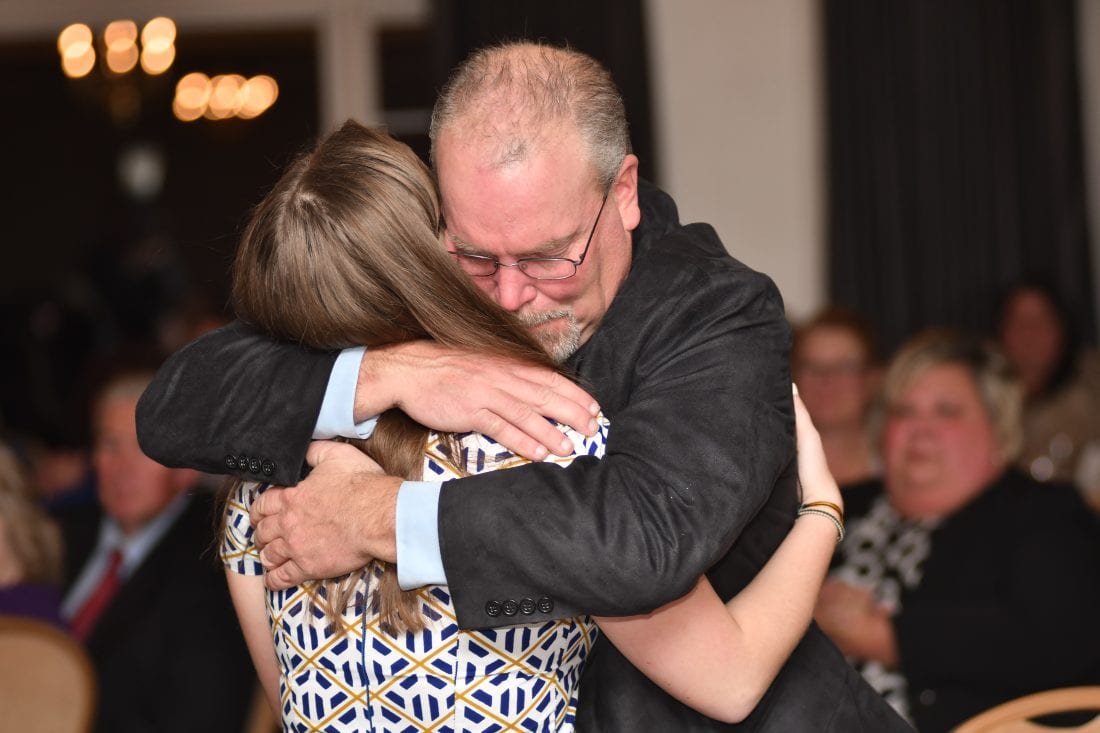 MARK NANCE/Sun-Gazette Donald Steinbacher hugs his daughter Stephanie, a senior at Jersey Shore High School after being named the Young Woman of Excellence at the 2019 YWCA Women of Excellence Dinner at the Williamsport Country Club Thursday.

“Tonight we have the honor of recognizing the achievements of 14 women of excellence along with five young women of excellence,” Dawn Linn, CEO of YWCA, said. “Today is a testament that we can do great things: to be inspired is great, but to inspire is incredible.”

A testament to that inspiration is Daeemah Abdullah, a former resident in the YWCA’s Liberty House program, who spoke about the YWCA and its programs.

“I had reached the lowest point in my life,” she said. “But nobody gave up on me there. Thank you from the bottom of my heart. I can stand here today and say that if anyone in this town needs help, the women at the YWCA Wise Options are there and they will help you.”

Following Abdullah, the honorees were recognized for their work in their prospective lives whether through advocacy for victims of sexual abuse and violence, through educating locals and immigrants with the tools to succeed or even creating ways to promote positivity in the county.

Brittany Fischer, vice president of community impact at the Lycoming County United Way, was congratulated for her work to give back to the area and to share stories about the community.

Thrive International Programs was also congratulated for its work with immigrants in the county, by helping them with English as a Second Language classes and citizenship.

The Wise Woman of the Year, Shea Madden, was recognized for her work with the West Branch Drug and Alcohol Abuse Commission.

“I am honored to be here tonight,” Madden said. “I want to congratulate all of the women of excellence. I want to acknowledge and thank our staff and our clients.”

She thanked the “women of excellence” in her life, who happen to be on the commission with her, and ended her speech by telling her two daughters that they “can do anything they want to.”

Lastly, Stephanie Steinbacher, a Jersey Shore High School senior, was honored as the 2019 Young Woman of Excellence through her work as the co-chair of the service club and president of the Future Business Leaders of America club.

Within the “weSHOREcare” club, she has worked with fellow students to collect over 7,000 food items, put together over 1,000 food boxes and raised $13,000 to support the New Love Center.

“Why do we talk about the negatives in the world instead of sharing the joys? This ‘single story’ happens everywhere. We can’t even let in people who are fighting for their lives in our country without fear that they might be a criminal,” Steinbacher said. “We always look for the worst, we never look for the good. I want that to change. I want to devote my life not only to helping others but to changing the single story.”