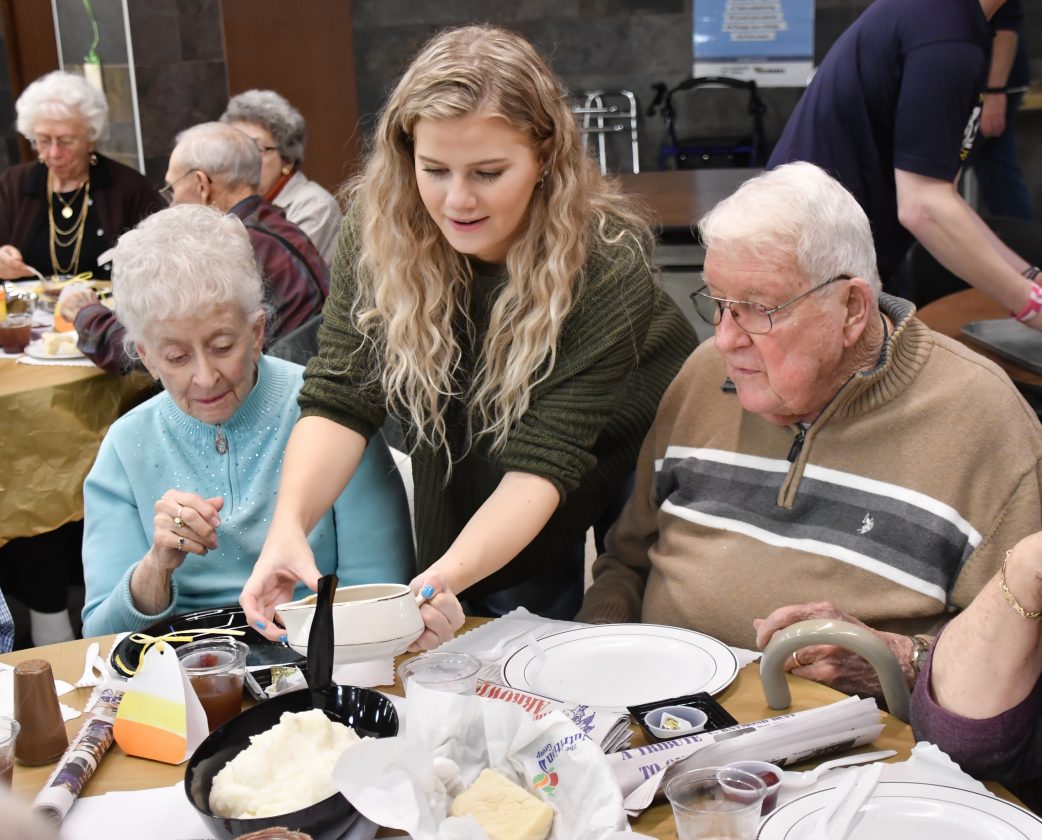 Owing to Montoursville’s agrarian past, many area residents, grateful for their health, recently sat down at the annual senior citizen meal at C.E McCall Middle School. looking back fondly at large family Thanksgiving dinners.

More than 180 people attended the third annual event, where middle school students both served and entertained them with their cheerleading squad, a drama performance and prizes.

“Family was really important to us,” said Mary Lee Harris, who both attended the event and organized the donations and prizes accompanying the meal.

Harris said she was raised in a farmhouse and her father had a large extended family, which packed out the home with 25 to 30 people during the holidays.

“Now when I think back, because a lot of them are gone now, I just have very fond memories of all of us being together,” she said.

The health to be able to give her time for events like the senior citizens’ meal was chief among her grateful thoughts.

“I’ve had some very severe health problems, and I thank God every day that I’m still here. He’s not done with me yet,” said Harris.

Shirley Bittenbender said she was thankful for her family and friends as she recounted her childhood spent in the countryside along Jim Wallace Run Road.

“I remember my father shooting a turkey in the backyard, and then we had it for dinner,” she said.

Faye Konkle and Nancy Jones, sisters who grew up in the area, said they remember a large fruit basket from their family get-togethers.

The container was filled with grapes and tangerines, said Konkle.

“We weren’t allowed to eat them because they were decoration until after the meal.” said Jones. “Back in our generation, fresh fruit was rare, we didn’t get that much.”

Dan Konkle, Faye’s husband, said when he looks at his children and grandchildren he’s filled with joy.

Ron and Sondra Beach said they were most thankful for peace in the country.

In past years the family would gather at the Beach’s home, but “I got tired of cooking, now we go to Cracker Barrel,” she said.

Thanksgiving was served buffet style at the Charles and Mary Ann Licher household, who said they were also thankful for their health.

Although he was happy to have them, it was always good to send them home too, he said.

School district officials said they wanted to make sure senior citizens know they care about them and their contributions to the area.

Christina Bason, superintendent, who brought the senior citizen meal to Montoursville in her first year at the district, said the reception has been great and plans to continue the tradition.