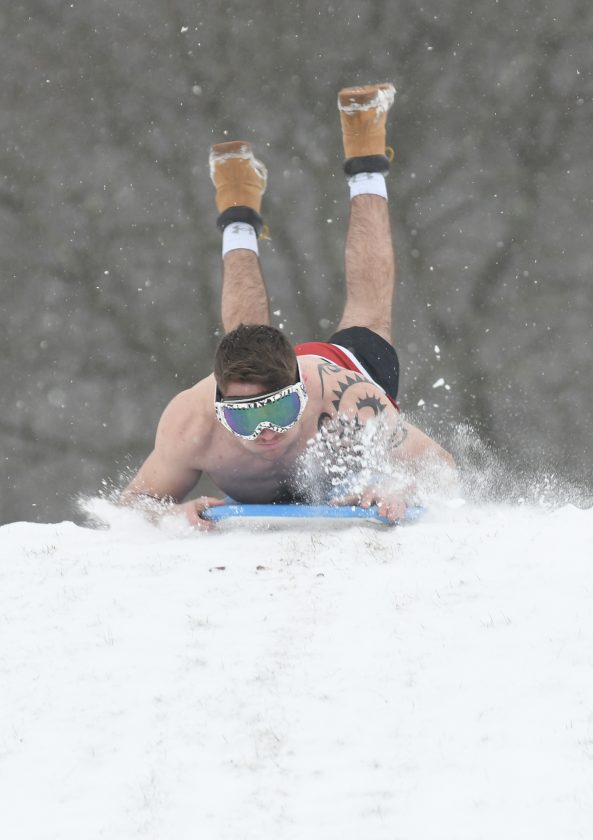 MARK NANCE/Sun-Gazette Garett Nolan takes a running start as he sleds in shorts, boots and ski goggles at South Williamsport High School Saturday. According to Garett, this is an annuel event for him.

The first large snowfall of the year bore down on the city Saturday, but officials and itinerants said they felt confident in their handling of the three to five inches anticipated by meteorologists.

Steve Travis, a meteorologist with the National Weather Service, said the snowfall is the largest so far in an otherwise dry month.

“It’s the first widespread significant storm that we’ve seen this season,” he said.

On average in January, the area would have seen 5.6 inches by now, however there has only been 4.4 inches, not including Saturday’s storm.

The forecast caused area colleges to close their campuses for the day, resulting in the cancellation of the peace walk held annually at Pennsylvania College of Technology.

“We have a good handle on the mains, and we have 10 trucks out at this point with plows and salt,” said Winder early Saturday afternoon. “We’re going to keep working diligently at it.”

With a winter storm lasting all day, Winder said it was important to keep people in reserves unless there was an emergency.

“We could get 20 trucks out at any point if we need to, but the goal is to not burn people out unless it’s necessary,” he said.

The city was lucky to have a less-compact snowfall in the first round of precipitation. This type of snow is easier for vehicles to gain traction in, rather than a heavier and more dense snow which is both more slippery and harder on equipment.

Along state roads, Smith said there were a few small car accidents before noon, and some roads were still considered snow-covered.

“With winter driving tips, we encourage people to stay home if they can. We want them to reduce speed,” she said.

In general driving conditions, it’s recommended to give the next car a three to six-second gap, but this should be doubled to six to eight seconds in inclement weather.

Vehicles should maintain about six carlengths away from plows to stay visible to the driver and avoid road treatments, she added.

A total of 39 PennDOT trucks were operating in Lycoming County by mid-day, which were experiencing no manpower or resource issues, said Smith.

Todd Wright, a River Valley Transit plowman, said conditions had begun to get more slippery in the city by 2 p.m.

“I’ve watched people slide at the intersection when the light turns red,” he said. “People should definitely be careful.”

As of 7 p.m., 2 inches of snow fell in the city while the outlining areas of Loyalsock Township and Montoursville each received about 1.8 inches, according to the weather service.

The snow didn’t seem to affect many pedestrians going about their routine in the city.

Cole Taylor, now of Williamsport, said he was moving into his girlfriend’s apartment along West Fourth Street.

“It’s definitely slick in some spots,” he said.

For the most part, those driving in the city were traversing safely, said Taylor.

Throughout the state, however, Tom Peabody, of Richmond, Virginia, said he observed about six accidents in his traveling to Williamsport to move his son back into his apartment.

Further south received more of an icy mixture, he said.

Sun-Gazette reporter Philip A. Holmes contributed to this report.