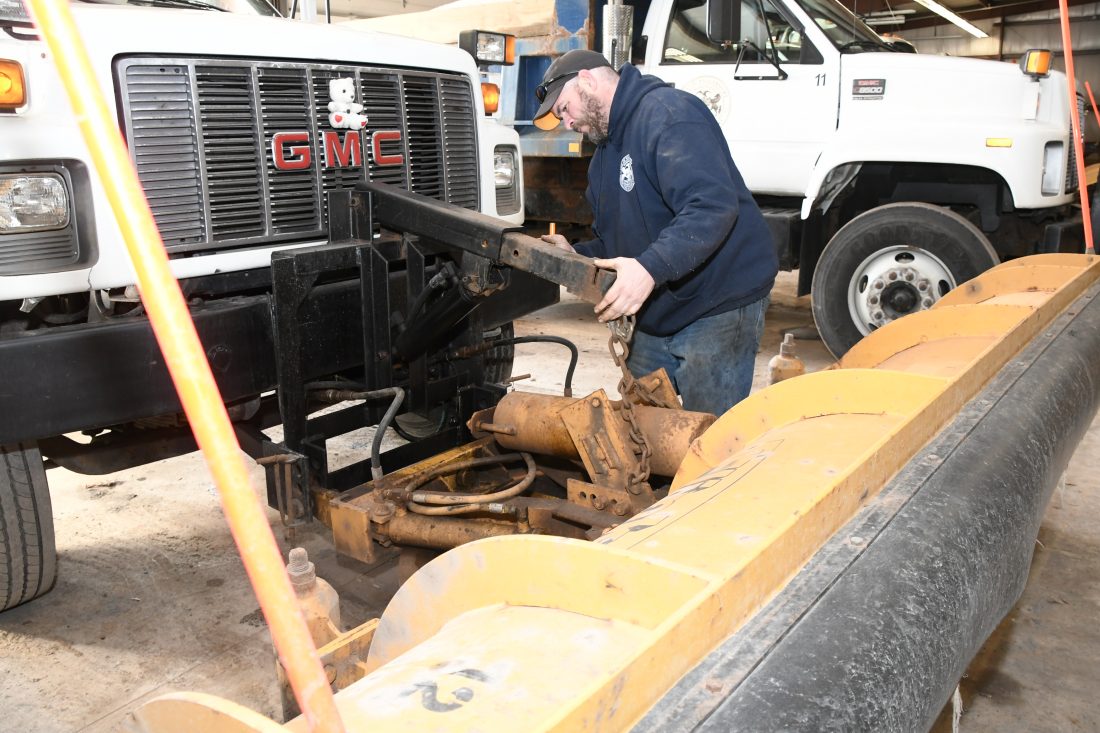 MARK NANCE/Sun-Gazette Dale Winner, mechanic for the Williamsport Department of Streets guides a truck driver forward before hooking up a plow at the city's garage as the department of streets prepares for Saturday's snow.

The radar indicated a nasty combination of snow, sleet and freezing rain. In response, the public works department of Williamsport and at the state Department of Transportation in Montoursville were prepping the plow trucks and even starting to treat some roadways Friday.

The forecast from the National Weather Service in State College indicates about 3 to 5 inches of heavy, wet snow mixed with ice and temperatures dropping tonight to below freezing.

He noted the 27 employees that keep the plow trucks driveable, operate them, and keep passage clear for motorists and pedestrians would be on call.

Bus services were to continue unchanged, he said.

The plow truck operators were going to be out and about on city streets for non-stop until the storm ended, he said.

Then, he said, the alleyways, about 50 miles of them, including those with garages in residential areas, will be cleaned, he said.

“We won’t stop until the storm ends and the roads and alleys are cleared,” he said.

It was expected to require overtime hours for the city.

In Montoursville, Department of Transportation anti-skid and plow trucks were at the ready and prepared for dispatch Friday afternoon. Some state trucks had applied pre-treatment to highways ahead of the storm, PennDOT officials said.

Roadways in Tioga and Bradford counties and a portion of Route 15 in Lycoming County were treated due to lake effect squalls having occurred in those areas.

Anti-icing involves wetting the highway with salt brine before a storm’s arrival.

The solution lowers the freezing point of water and slows or prevents ice from forming a bond with the pavement during the early stages of a storm. officials said.

The salt brine is spread from sprayers attached to the brine tank on PennDOT trucks. The trucks have signs on the backs indicating their purpose.