Quilt Block Trail serves as a piece of Americana 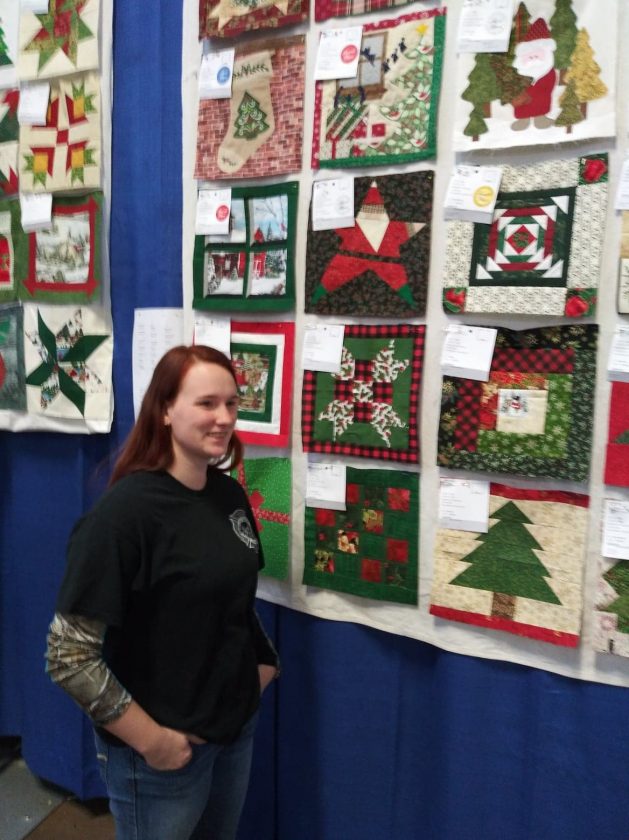 Among the sights at the Pennsylvania Farm Show are examples of locally produced quilt blocks, colorful templates for skilled quilters that are designs affixed to areas Granges and barns.

For Huntersville area resident, Elizabeth Downey, former Pennsylvania Grange president, the Pennsylvania Quilt Trail and the blocks of various sizes and shapes, in wood and metal, make rural Pennsylvania a true part of the American experience.

“My husband Bernie and I paint them,” she said of the quilt blocks, a sample of which include the 160-plus blocks on the walls of the exhibit hall at the Farm Show.

The Downeys also prefer to have them around their own home.

“My husband I made several 2-foot-by-2-foot ones and put them here at the house,” Downey said.

“The designs most eye catching have many layers of paint,” she said. “They are made by first putting on a coat of base preservative on the wood. Some people around the state are using metal frames,” she said.

The preservative helps to hold several layers of paint, she said.

Paint that is used is that which won’t fade or run outdoors, she said.

After deciding on colors, the artist will tape around every section and give a second or third coat letting it dry.

The patterns can be anything from the Penn State Nittany Lion to a quilt that holds some value for a family, such as pets or farm animals such as dairy cows.

Downey and her husband, Bernie, are skilled at the craft.

“It is so peaceful to look at them,” Downey said.

Two such quilt blocks are on area Grange buildings, she said.

One is affixed to the Eagle Grange, which is along Route 15 near Allenwood and another at Allegheny Grange near Huntersville, Downey said.

One is attached to the Pennsylvania Grange Building at the Lycoming County Fairgrounds in Hughesville.

Examples at the show and on the cover of Pennsylvania Grange News included a four-leaf clover, a rabbit, a pig and a hen.

These beautiful quilt blocks dot the back road barns across rural Pennsylvania and are a fixture in all regions, according to Debbie Carn, a spokeswoman at the Farm Show.

Hanging on the walls are blocks in stark red, white, blue, yellow and other colors.

Barbara Gross, director of the quilt trail at the show, said each year she is thrilled by the visitors who comment on the intricate artwork. She also teaches a class on how to make them.