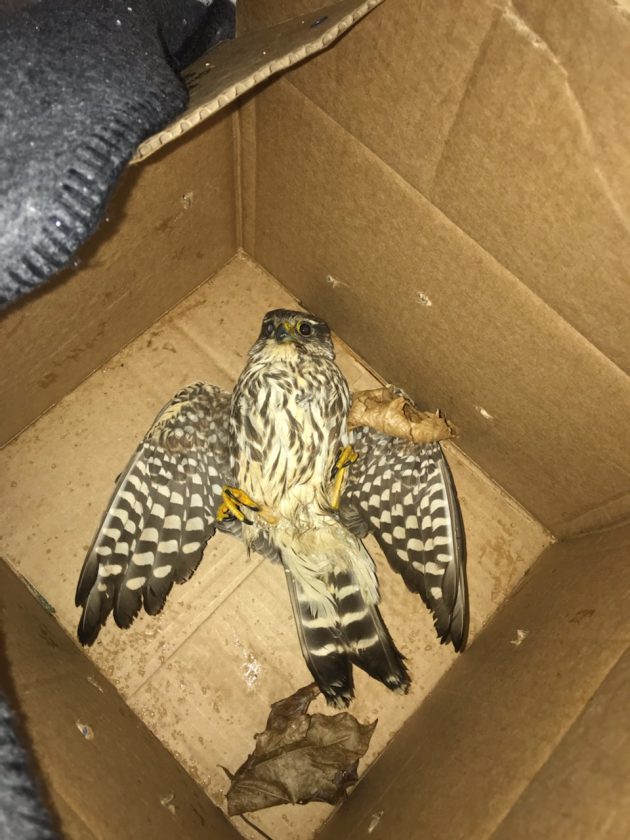 Patty Kline was on her way to church earlier this week when she saw an injured bird in the middle of Arlington Street in South Williamsport.

“I slowed down and, as I got closer to it, I realized it had to have been hurt,” Kline said. “It was hopping and it had one wing out.”

She added that she had went around the bird to make sure it was hurt and put her four-way lights on to call the police as she believed it to be a hawk that needed help.

Officer Seth Stropp came to the scene to help Kline get the bird into a blanket and a box after it got stuck in a bush trying to escape.

“We got a 911 call from an individual that said she found the bird and believed it was a hawk and we responded,” Stropp said. “We were able to chase it down the road a bit and it flew into a bush to where we were able to get it and wrap it in a blanket and put it in a box.”

“We slowly approached the bird,” Kline said. “It took a couple of attempts, but Officer Stropp got it out of the bush.”

“We receive numerous calls about injured wildlife. Normally its domesticated cats or dogs or a deer,” Stropp added. “This is the first incident I have been involved with that was a falcon, a merlin.”

Currently the bird is at the Centre Wildlife Care facility in Centre County until it is healed enough to be released back into the wild.

Robyn Graboski, executive director, said the bird has a “soft tissue” injury and no fractures in his wing.

“We are treating him with pain medicine and antibiotics,” she said. “Soft tissue injuries are difficult to predict but I anticipate that he will make a full recovery.”

Graboski added these types of injuries often can take a long time to heal properly. Before releasing the bird, the care facility will ensure it has enough stamina and can fly well enough to survive back in its natural habitat.

“Every bird is different in their own merit,” she said.

With that, Kline and Stropp hope to be around when the bird gets released, as they were integral to its recovery.

“We want to be included when it gets released,” Kline said. “I mean, to save anything is amazing — it didn’t matter if it was that type of bird or not, but to find out that it’s something that is rare made it that much extra special.”

“I thought it was pretty cool,” Stropp said. “I am a wildlife guy myself, I enjoyed doing it. It was a rewarding experience for me.”