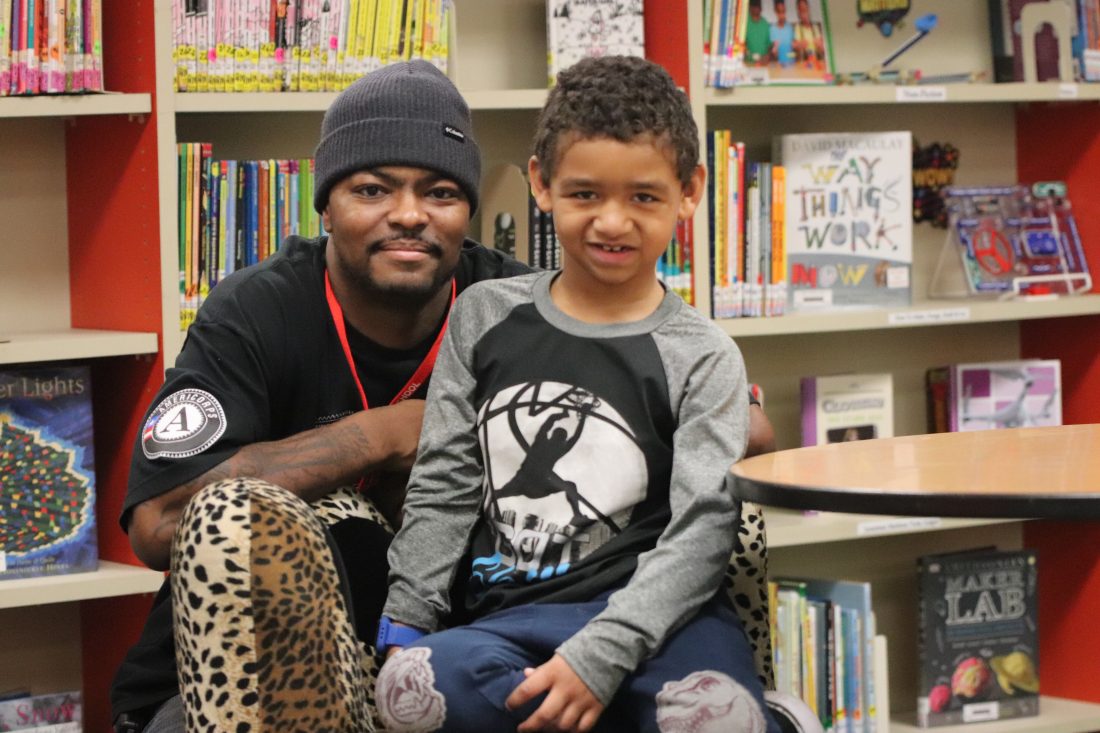 It was what Odren Polk called a “usual day in the cafeteria” at Stevens Primary School. But if not for Polk’s quick thinking and the first aid training he had received for his job working at the school through AmeriCorps, it would have been anything but business as usual for first-grader Kenyon Ritter.

“It was a usual day in the cafeteria. I was playing around with the kids,” Polk shared.

“Me and the kids being silly,” was how this man the kids call “Mr. O” described it.

“I was actually talking to a group of kids and the kid behind me was choking. I noticed, but not right away,” he continued.

Seven-year-old Ritter had been standing near Polk, who at first was paying attention to the other kids. Then he noticed something wasn’t right with Ritter.

“I turned around and his (Ritter’s) face was getting red and his eyes were getting big,” Polk said.

That’s when his training kicked in and Polk responded quickly.

“I immediately grabbed him and I asked him, ‘are you ok’ and he shook his head no. And then he just grabbed his neck and I noticed that he was serious,” Polk said.

Polk, who had received first aid instruction as part of his training with AmeriCorps, said that at first he bent Ritter forward and hit him on the back in order to dislodge whatever was in his throat, but that didn’t work.

“When I saw he couldn’t breathe, I immediately put my hand over his chest and my palm on his back and then I pushed it out,” Polk explained.

A grape tomato and a few other items were expelled and Ritter was able to breath again.

Ritter, the son of Whitney Douty and Jamarr Ritter, summarized the incident as only a child could.

“Me and my friend were playing. And then I ate another tomato and then I tapped Mr. O and he helped me,” he said.

When asked if he had time to think how scary the incident was, Polk said it really was just an automatic reaction.

“I didn’t even think about it. It was just automatic — just help him, talk to him, to see if he was alright. Then I checked him throughout the day,” he added.

This is actually the second time the father of three used the Heimlich maneuver to save someone from choking.

“Me and my kids were out playing and a little kid was at the park,” he said.

Again, he said it was just automatic response.

“When you go through those things, it’s automatic,” he added.

For Polk, what he did was just a normal reaction and not something extraordinary.

“I never thought anything of it. I just thought I was doing what I was supposed to do,” he said. “It wasn’t like I was looking for any type of feedback.”

Polk said he was doing what came naturally.

“Part of it was actually parenting. I was like, oh my God, help this baby,” he added.

Polk noted that he feels everyone should take first aid courses to learn what to do in situations similar to this.

“I’m very thankful and very appreciative that I got to take that course because it helped when I needed it to,” he said.

James L. Ellis, principal at Stevens, agreed that it is important to have that training.

“It was a scary thing for everybody that was there and Mr. O just happened to be right there to help him out,” Ellis said. “I think first-aid CPR training (is important). That was a great example of why we should have it. It could happen at any time.”