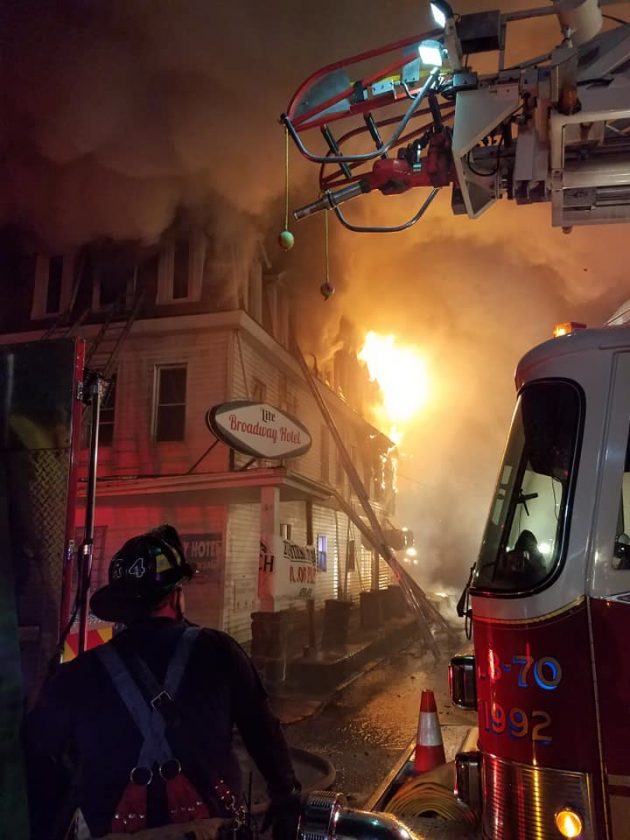 Jersey Shore — The cause of a late-night three-alarm fire Saturday, which injured two people, is still under investigation, said first responders.

A rescued man and another tenant found on the front steps with burns on his hands were flown from the area for medical attention — one to Lehigh Valley Burn Center, near Allentown, and the other to Geisinger Medical Center in Danville.

Their condition is still unknown, said Officer Shawn Hummer, with the Tiadaghton Valley Regional police, who was the first to arrive.

“There was smoke coming from the second and third floors on the north side of the building,” Hummer told a Sun-Gazette reporter at the scene.

“There were some people out front and I asked them if everyone was out, but they weren’t sure,” Hummer, who also is a Jersey Shore firefighter, said.

“I went through the front door. There was a light smoke condition on the first floor,” Hummer said.

He climbed a set of stairs to the second floor where smoke conditions were heavier.

“I was hollering ‘Is there anyone in here?’ There was no response,” Hummer said.

“There was heavy fire in a room down the hall. I couldn’t make it to the third floor. I started going up the stairway, but it got too hot and smoky,” he added.

He retreated to the first floor, where he was joined by a second police officer, both of whom made sure everyone was out of the hotel’s bar.

When Hummer came outside, he helped firefighters take a ladder off a fire truck.

Witnesses reported hearing a man yelling for help on the third floor.

“He was yelling ‘Help me. Help me,’ “ one witness, who declined to give her name, said.

She and another woman watched the daring rescue from across the street.

“Firefighters went up a ladder and got him out,” the second woman said.

Two more people were displaced by the flames and assisted by the local chapter of the American Red Cross.

A fire marshall with the state police is still conducting the investigation where he will determine the cause and origin of the flames, said Hummer.

Firefighters from the borough, Antes Fort, Nippenose Valley and Woodward Township responded on the initial alarm.

At about 11 p.m., more firefighters were called from Waterville and several Clinton County communities.