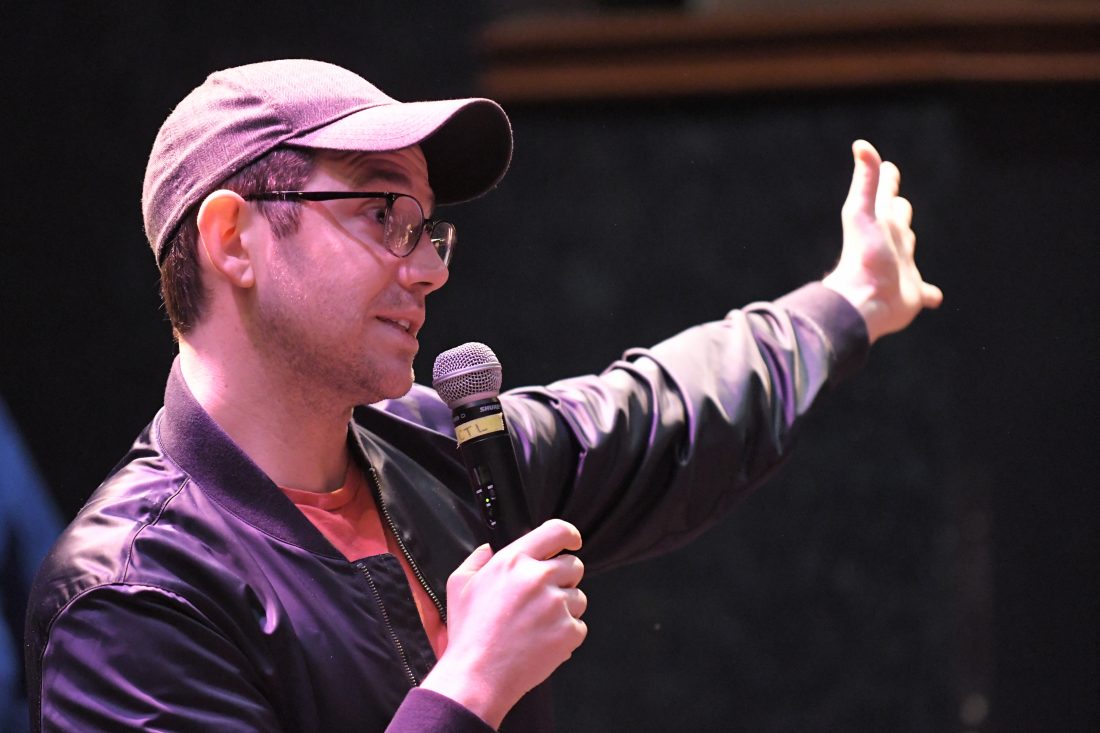 MARK NANCE/Sun-Gazette Broadway vocalist and actor Santino Fontana gives advice following a performance during an All-Ages Educational Master Class with Fontana at the Community Theatre League Saturday. The event, which is a fundraiser for the CTL, is part of the 4th Annuel Evening with a Star, allowing local talent to sing and receive instruction from Santana on their performance. The event also includes an intimate performance by the star at CTL Saturday night. Fontana is known for "Best Actor in a Musical", "Tootsie", voicing the vilainous 'Prince Hans' in Disney's Frozen, and many other rolls on Broadway.

Santino Fontana, known from his performance as Prince Hans from “Frozen” and as Michael Dorsey/Dorothy Michaels in the Broadway production of “Tootsie,” was this year’s famous guest of honor for the Community Theatre League’s fourth annual Evening with a Star event and Broadway master class on Saturday.

Local and area performers had the chance to perform Broadway musical selections before Fontana and receive feedback for when they go to auditions.

Some of the musical hits heard at the master class came from widely popular musicals like Newsies, Les Miserables and Wicked.

After each performer sang their piece, Fontana spoke to them about what the musical selection was about and how to improve their performances.

Some of the advice that Fontana used for many of the performances included how to take the song from beginning to end and the changes that go along with that and the setting that the characters are in. He also took questions from the class and provided them with advice about going into auditions confidently.

“Theatre is what happens between people,” he added. “You can get a really good sense of people, how good they are and who they are in a tight format. You want to pack that (your song) with as many different colors. You want a steady stream of you.”

Taylor Elliott, freshman at Pennsylvania College of Technology, was one of the many performers who got the chance to sing before Fontana.

“I was shaking like crazy,” he said. “The fact that I just sang for Santino Fontana is mind-boggling.”

In terms of his performance of a piece from Newsies, he said that he learned how to loosen up and have fun from Fontana.

“I think the most important thing I learned is to not take everything too seriously,” he said. “When we do that we get trapped in our head and try to make everything perfect but we are just playing pretend.”

Jersey Shore local Kendall Eichenlaub performed “Defying Gravity” from the Broadway show Wicked and made a statement with her performance though she was nervous.

“This experience was a really good learning experience because I get nervous during auditions,” she said. “I hope to take away being more confident in what I am doing, and singing.”