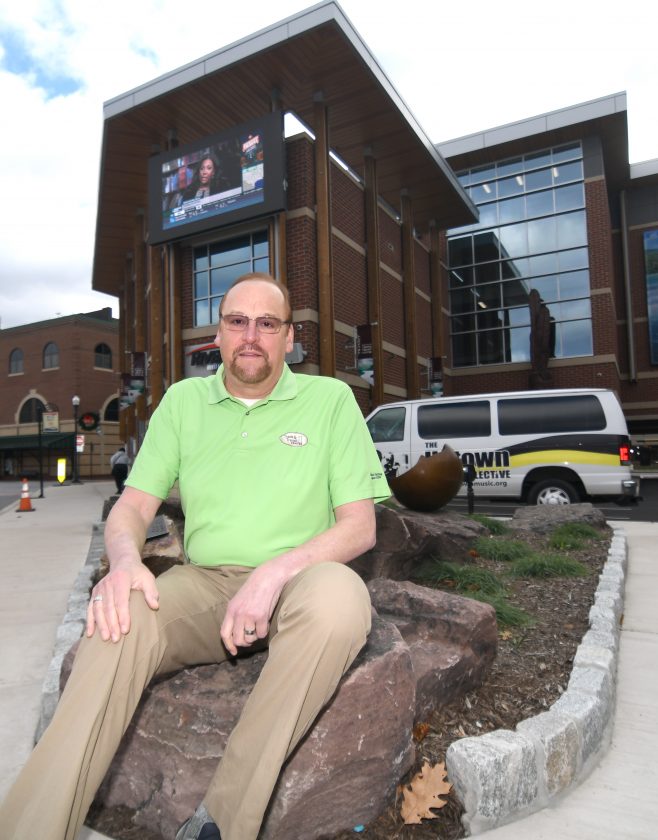 William E. “Bill” Nichols Jr., whose city career spanned 43 years and eight mayors, got up each day of the work week and thought either about mass transit needs or financial advice, city and Lycoming County colleagues say.

“His family was the customer, but he also was good at finding grant money or using federal and state subsidies that the city was entitled to receive,” said Mark Murawski, retired Lycoming County transportation planner.

Nichols’ legacy can be seen looking out of most any building downtown — modern facilities for bus passengers, space for a nonprofit music school to prosper and technology for tomorrow’s businesses.

Along the sidewalks in portions of the central business district are accentuating brick pavers, wider sidewalks, period lighting and a sports and broadcaster hall of fame walking path, showing large, coin-shaped medallions embedded with the names of super stars in their athletic and radio-television-print media fields.

Those walking downtown can see artwork, sculptures and murals — in part — because of his vision.

“A lot of the wonderful developments happened only because of his involvement,” said John Grado, retired city engineer and former director of streets and parks and community and economic development.

As the Lycoming Mall was literally sucking away shoppers’ dollars from merchants downtown, Nichols recognized the need for the Center City Mall — a walkable downtown shopping district on Pine Street, Grado said.

During the 1980s, Nichols felt compassion for bus riders and drivers of buses that were stalling on streets and making circuit stops downtown.

“He took an antiquated bus fleet, transforming it through purchases into a modern transit service rivaling any in the state,” Murawski attested.

“He wasted no time ensuring federal accessibility compliance of the fleets,” Murawski said. Even in the 1980s, the newer buses were equipped with lifts for wheelchair access.

Nichols had a taste for showcasing transit and city resources.

“Bill brought out the Peter Herdic trolley,” former Mayor Phillip E. Preziosi (1992-1996) said, referring to a replica of what was driven in the late 1800s.

Nichols rolled out the trolley during the annual state convention of the Pennsylvania League of Cities in June 1994, giving visitors the charm of riding in it and the ambiance that carried.

Nichols expressed to the Sun-Gazette and others over the years his personal affinity for the Hiawatha Paddlewheel Riverboat, which was restored in the 1980s by the Williamsport-Lycoming Chamber of Commerce and has been operated for many years by River Valley Transit, Preziosi said.

Nichols was among those who orchestrated a fundraising drive with the late Robert Shangraw, director of the board at Lycoming College who worked for Merrill Lynch, to save the boat, Preziosi said.

Donations were used to make the repairs needed to get it back on the river safely for passenger excursions, Preziosi said.

As a millennium approached, Nichols had more opportunity to impact city development.

By 1999, under Mayor Steven W. Cappelli (1996-2000), Nichols had made certain of the construction of the Joseph M. McDade Trade and Transit Centre I.

“He wanted a central hub for transit and commerce,” said Vincent Matteo, former CEO and president of the Williamsport-Lycoming Chamber of Commerce.

“Bill was on the coordinating committee on the Williamsport Area Transportation Study,” Matteo said. “I don’t think there was a local person who had a bigger positive impact on city and regional projects than Bill.”

As part of the coordination of the planning, Nichols used his skills and experience to compile solid rationale for projects and his vision, all with a “can do” or positive attitude, Matteo said.

His planning inspired others to also see the light at the end of the tunnel and to join as a team on projects, Matteo observed.

When Mayor Michael Rafferty (2000-2004) was in charge, Nichols wanted to expand the bus service into a regional presence.

The bus system was always an integral part of getting spectators of the Little League Baseball World Series to and from the venue in South Williamsport without vehicles causing more congestion than necessary.

Rafferty was among the guests at the 2001 Little League World Series, just a month before the nation was shocked by the tragedy of Sept. 11, 2001.

Bus service to the series was paramount as thousands could take it without worrying about parking thanks to Nichols’ and his team.

Passengers were to be served while under Mayor Mary B. Wolf (2004-2008), the city would experience the start of a revival.

More buildings and modernization of garages for parking and a cinema were constructed.

Under Wolf, Nichols was named director of administration, assuming those extra duties and acting as a department head.

About this time, the area was on the verge of exploring its vast, rich Marcellus Shale play.

Natural gas as a cleaner burning and energy efficient resource would not be an opportunity Nichols missed, Matteo said.

Nichols oversaw the purchase a fleet of buses that operated on compressed natural gas, Murawski said.

The cost of that fuel was about half of the operating expense of diesel buses. Natural-gas use cut those costs by 50 percent, Murawski noted.

It would be a fueling station for organizations, individuals and businesses that drove natural gas vehicles and works to this day, Murawski said.

Riders in the Northern Tier counties can be assured of a quality transportation and bus service, Murawski said.

More than a year ago, the transit bus travel expanded into Clinton County and is now being eyed for Northumberland, Montour, Columbia and Snyder counties, Murawski said.

For those parking downtown, either in a garage or a surface lot or metered parking space, Nichols was able to make the financing possible for improvements, said Dr. Anthony Cipolla, the executive director of the Williamsport Parking Authority.

“As local citizens we pay so much in state and federal income tax, and more specifically state and federal gasoline tax,” Cipolla said. “Bill has fought tirelessly to bring our fair share back to our little city.”

“Bill has always reminded me of the importance of supporting our younger generation,” Cipolla said, referring to his work with developer Daniel A. Klingerman to bring the Liberty Arena to town.

“In this way, we have a chance of keeping our local talent home,” Cipolla said.

In 2015, under Mayor Gabriel J. Campana (2008-2019), the Transit Centre II, Midtown Landing and the Williamsport Sports Walk were dedicated. People gathered were treated to free refreshments and hot dogs. They could take strolls around Midtown Landing and walk down William and West Fourth streets where local sports stars and broadcast local legends’ names are on the medallions and embedded in the sidewalks.

During the dedication, a “Bases Loaded” statue, dubbed the “Last Infielder,” was unveiled, as was artist and retired Lycoming College professor Roger Shipley’s “Germination” sculpture, the latest PublicArtworks commissioned piece at Midtown Landing.

The Landing, in fact, was an idea Nichols said he got from visiting a similar plaza in Jacksonville, Florida.

That Landing has features linking the waterfront to city history, tradition, art and functionality, he said.

Likewise, Midtown Landing is a central hub, connecting its visitors to the nearby West Branch of the Susquehanna River and transportation improvements over the ages, while many wait in comfort inside or outside for buses to arrive and depart.

Trade and Transit Centre II and River Valley also is functional, connected to people’s cellular phone through apps such as “My Ride,” which provides customers times for arrival and departure and destination information.

The Trade and Transit Centre II, which was constructed through grants and donations and support by the parking authority, PennDOT and First Community Foundation Partnership of Pennsylvania, serves as the home to the Uptown Music Collective, a school for amateur musicians, and the Michael Ross Event Room, used for debates, conferences, and corporate training sessions.

Impediments of accessibility to City Hall will mean the Trade and Transit Centre II is site of City Council meetings starting on Feb. 20.

Nichols’ once said that the facility could be used in the event City Hall couldn’t be in an emergency situation or for another reason.

Each spring, as a member of Trinity Episcopal Church, Nichols says he enjoys taking part in the reenacting of the Palm Sunday biblical account of Christ’s ride on a donkey into Jerusalem, as crowds praise him and toss down palms in his path a week before his crucifixion.

Nichols said he walked in that event with the assurance of his faith to move the city ahead as well.

Without his touch in city business, Nichols said in a brief interview that he would have to watch events unfold from his house near Brandon Park.

Hopefully, as Matteo said when told this, Nichols will get to see the fruits of his labor.

The city is preparing to see the opening of Basin Street as a two-way boulevard between East Fourth and Third Streets, further linking to Via Bella, followed by the repaving and reconstruction of East Third Street in the Gateway area.

The work will include sidewalks, trees and period lights added between State and Market streets.

It also could see the pedestrian path or greenway on Willow Street, further connecting pedestrians to the downtown and to the Susquehanna River Walk and the Russell Inn Heritage site at East Third and Mulberry streets, a proposed frame of the inn which was the first tavern, jail and courthouse in Williamsport.

These were visions crafted in the mind of Nichols as he worked with consultants, architectural designers, engineers, and contractors to make it happen.

“The secret to Bill’s success?” Cipolla asked, before answering his own question — “His love for this town and community are what he is all about.”