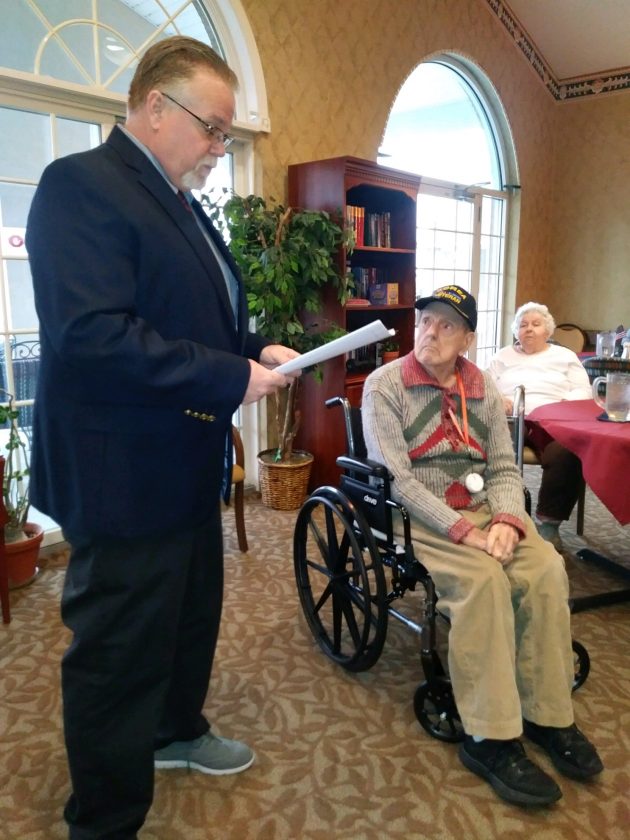 Korean War veterans from Lycoming County have been honored at different times through the years for their brave and diligent duty including in public ceremonies.

Richard Hurd can be counted among those few who somehow was overlooked for special recognition given to those veterans.

Hurd, 91, a resident of the Hillside Senior Living facility, Loyalsock Township, finally got his moment.

At a breakfast ceremony at the Hillside, he received the Ambassador for Peace Medal, an honor that expresses the “everlasting gratitude of the Republic of Korea and its people for the service you and your countrymen have performed in restoring and preserving their freedom and democracy.”

The presentation was made by Ron Poust, director of Veterans Affairs, Lycoming County.

“It’s important we recognize these guys,” he said.

Poust noted that Hurd was very humble and gracious in receiving the award.

Hurd served as a road grader operator in the U.S. Army for an engineering company during the war which engaged U.S. forces from 1950 to 1953.

His job was to maintain supply roads for transportation of ammunition, medical supplies and wounded soldiers from the front lines.

In making the presentation, Poust said Hurd helped open up dirt roads from rice paddies where soldiers had been fighting.

“The enemy was never far away and at night they would drop mortar rounds on the roads,” Poust said. “Richard experienced bouts of lung infections and malaria while in Korea but has said he was most saddened by the deaths of two friends while serving.”

He was quick to note that a lot of men fighting there didn’t come home alive.

A native of Jersey Shore, he joined the Army at 17.

Following his tour of duty in Korea, he was assigned stateside to Yuma, Arizona and also Camp Cook, California.

He worked for 27 years for Piper Aircraft in Lock Haven and later for Corning Glass in State College.

He and his late wife, Madeline May Martin, lived in Avis, raising two children.