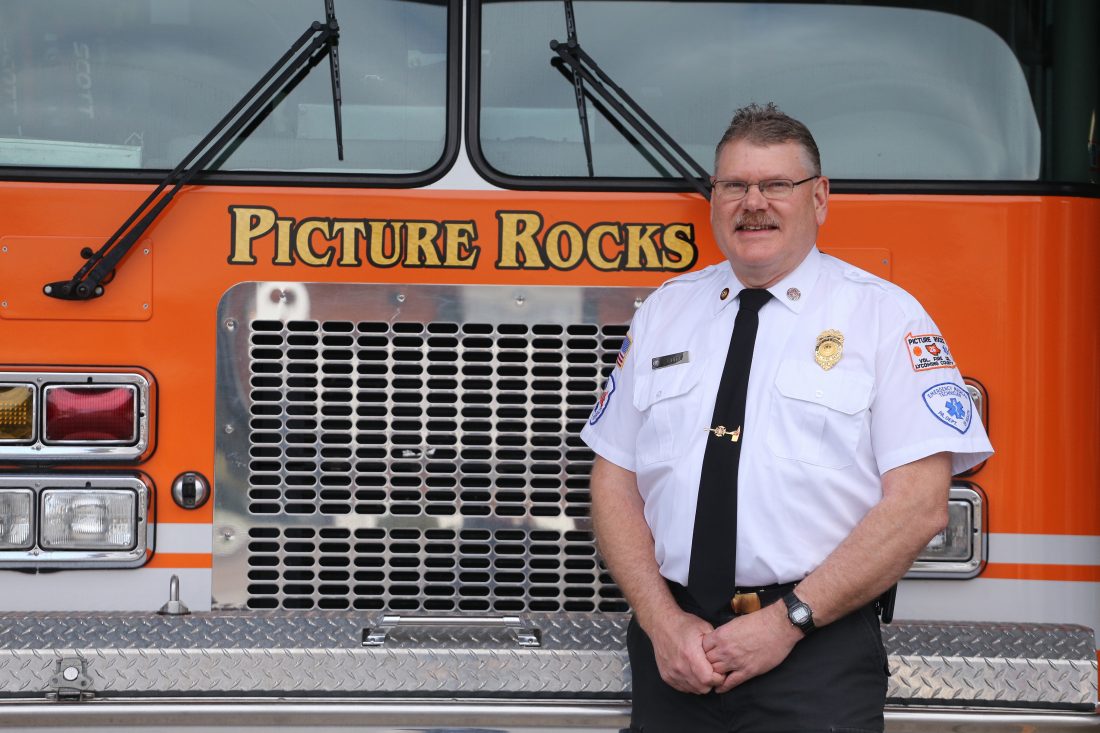 Just as it has at home and in the office, COVID-19 has turned life on its head in the volunteer firehouse.

Out of precaution for their members as well as for the communities they serve, “we’re acting very differently. I don’t know how to describe it,” Alan Little, an assistant Picture Rocks fire chief, said.

“We have changed the way we respond to calls. We’re limiting the number of personnel that respond on a single apparatus. Where we use to have six on an apparatus, we now just have four. The other two will ride on another truck,” Little explained.

“We don’t want to be all jammed up on one truck. We’re distancing ourselves. We’re spread out on more trucks,” said Little, a Picture Rocks native and volunteer firefighter in the borough for more than 30 years.

Hand sanitizers, surgical gloves and face masks — which use to be just on the ambulance – are now strategically located throughout the firehouse and are on other fire equipment, Little said.

“We use hand sanitizers now immediately after every call, even before we have left a scene (of an incident) because of what we have touched. Back at the firehouse, we wash down all the fire equipment that was used, inside and out,” Little said.

In cases when the Picture Rocks ambulance takes a patient to the hospital, “UPMC has all the cleaning supplies at the ER that we need to wipe down the ambulance even before we leave,” he added.

In incidents where an ambulance crew just treats someone at a scene, “everything is wiped down and sanitized” back at the fire station.

“As soon as we’re done, we’re out of there (the firehouse). No one hangs around anymore. That’s a whole new thing for us,” Little said.

Being actively involved in a fire company is very much like being in a family, Little said.

Upon returning to the firehouse after responding to a bad crash or serious fire, firefighters would spend time debriefing about it, supporting one another as they talked about what they did and how it impacted them.

That’s out — no debriefings, no meetings, no gatherings whatsoever.

“This is a whole new thing for us. It’s hard, very hard,” Little admitted.

“We are doing more conference calls. The other night, we had 28 of our members involved in a conference call from their homes for 48 minutes,” Little said.

Fire officers are doing more conference calls among themselves as opposed to meeting at the firehouse.

Little said there are ways fire company members can still reach out and be supportive to one another emotionally, especially after handling a very challenging and difficult call.

Coronavirus has changed the dynamics and life in the firehouse as it used to be.

“We’re still doing all our necessary safety checks on all our equipment but doing it in small groups, a couple at a time,” Little said.

“This is very hard for a lot of (our) people to accept. We are a very close family. We respond and go through emergency situations together,” he said.

Like volunteer fire companies throughout the county, Picture Rocks has had to cancel all its fundraising events.

At the Muncy Area Volunteer on Main Street in Muncy, Fire Chief James Michael says firefighters there are also taking all the same precautions to protect themselves and the community.

“We have limited the number of people we have at the station at any one time. One or two people go in to check on the apparatus to make sure everything is ready to go on the next call,” he said. “We wipe down everything and sanitize everything. There are no more gatherings. None of the members hang out at the station, which has always been the common thing to do at the firehouse,” Michael said.

“Members are still trying to get use to this. Everyone understands the need to keep themselves safe and healthy so that they are ready to go on the next call,” he said.

“Everyone has a positive attitude. No one has yet come forward to say they want to step back from responding (to emergencies). We’re following all the necessary (state) Department of Health protocols,” Michael said.

“Hopefully, social distancing will help prevent this (virus) from spreading,” he said.

For now, the fire company has enough masks, gloves and other protective medical supplies to handle a few cases, “but we could run out in a week” if the area is hit with too many COVID-19-related incidents, Michael warned.

“We’ll work with our partners, with our neighboring fire companies, to get through this,” he added.