By MARC LEVY and MARK SCOLFORO 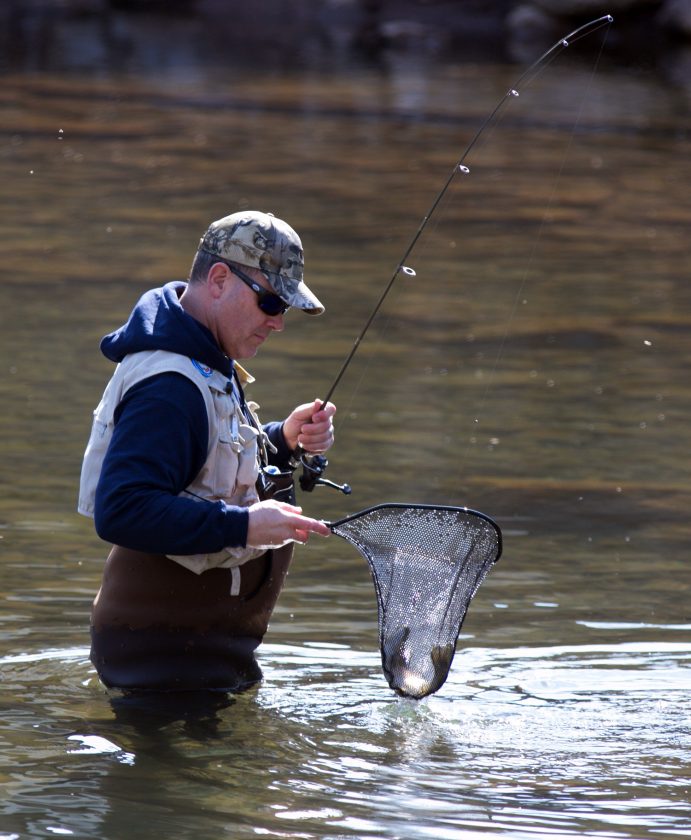 Scott Burrow of Watsontown catches a trout in Muncy Creek in Picture Rocks on Tuesday morning. The early start of trout season took most anglers by surprise. KAREN VIBERT-KENNEDY/Sun-Gazette

Not every state agency is necessarily urging people to stay home: The Pennsylvania Fish and Boat Commission opened trout season Tuesday, although the abrupt announcement was two weeks ahead of schedule in a move designed to preempt big gatherings of anglers and travel that typically occur on the traditional April opening day.

Charles Knowlden a member of Susquehanna of Trout Unlimited, Williamsport, said, “As long as people keep their social distancing, there is really no problem. The weather has been good and people with cabin fever are eager to get out. It’s a good idea.”

Knowlden said he likes to fish area streams including Lycoming, Pine and Loyalsock creeks but he hasn’t gone fishing just yet.

“I’m just getting my stuff together,” he said. “I know some of the (Trout Unlimited) members have been out.”

Streams with sections devoted to Delayed Harvest Areas offer anglers the opportunity to fish 12 months of the year with artificial lures or flies only.

Though trout season is open, anglers and boaters must abide by social distancing guidelines provided by the U.S. Centers for Disease Control and Gov. Tom Wolf, the Fish and Boat Commission said.

“The trout we have been stocking have had time to spread out, and so should you,” Tim Schaeffer, the agency’s executive director, said in a statement.

The commission nonetheless urged anglers and boaters to fish close to home, cover their faces with masks or cloth coverings, keep a distance of at least 6 feet from others, only go fishing with family members living in the same household and never share fishing gear with others.

Not all waters have been stocked, and the commission said it won’t provide a stocking schedule or a list of stocked waters, to further discourage group gatherings.