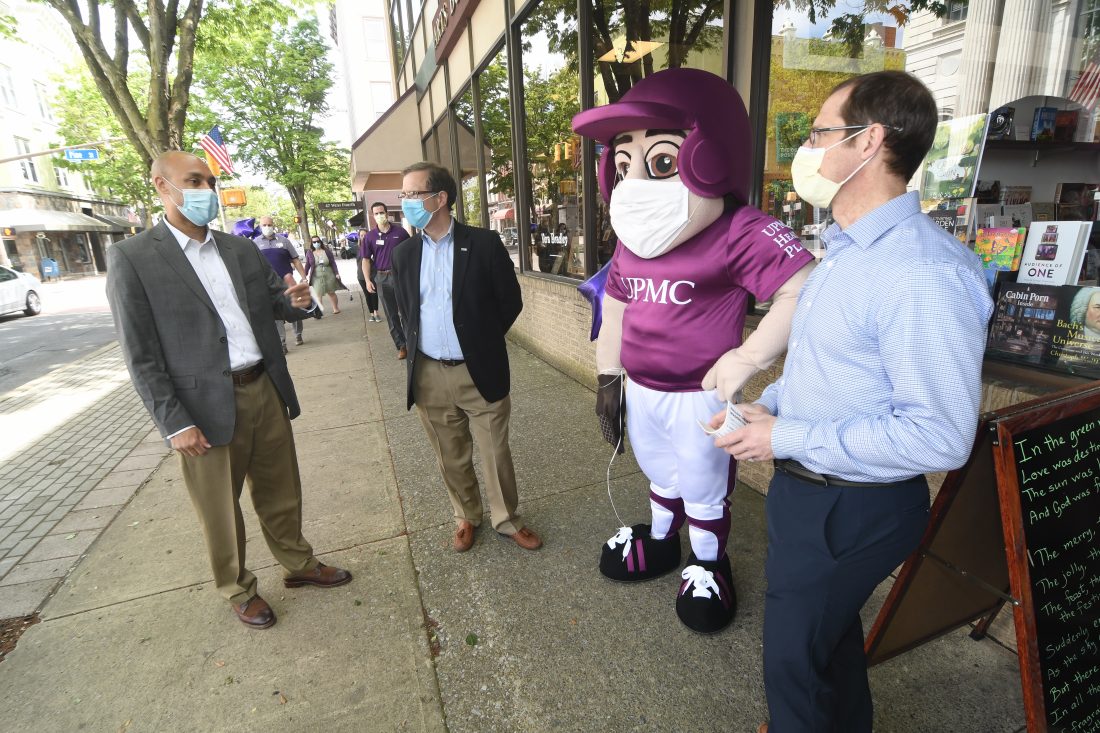 The city remains in the yellow caution stage amid the COVID-19 pandemic, but that didn’t stop Jana Mussina of Montoursville from dropping by a downtown merchant on a birthday gift run Wednesday.

After being on a lockdown due to state mandate to slow the spread of the virus, Mussina was among many others strolling up and down West Fourth Street.

The afternoon temperature was in the mid-70s and sunshine struck the storefronts as people, most wearing facial masks, traversed the downtown area, many with cups of coffee and bags in their hands.

Drivers honked their horns and waved at a group arranging a quick tour to interact with merchants and shoppers on the picturesque afternoon.

“It’s been nice to see people,” a West Fourth Street resident said. “Nice weather to be a little bit closer to people,” she said, walking with her friend.

“It is very nice,” Mussina said of the first opportunity to walk downtown and shop. “I am exciting that things are starting to reopen again and we can go out and get things. I am looking for Vera Bradley bags and jewelry.”

“It’s tremendous,” Slaughter said of the opportunity to get outside and go into the shops. “Obviously, any time you can come out and show appreciation to businesses and industries and those who are helping to do this, it’s great. We are all in this together and it’s going to take all of us to get through it.”

Slaughter said it was just as important to show appreciation to the merchants who have waited for more than two months to reopen.

“All of us just coming out here is good,” he said. “During these times any positive expressions help us all get through.”

Slaughter has formed a COVID-19 Committee, a group of business leaders, college presidents and others interested in re-establishing a strong economy.

“We’re going to be supporting the local merchants,” Slaughter said.

Sam Sawyer, a spokesman for UPMC Susquehanna, also explained how the health care provider organized “Help the Helpers,” the name of the tour and event which were part of a multi-pronged approach on how the city can get back to business, and to do it safely in the pandemic.

Gov. Tom Wolf and Dr. Rachel Levine, state Health Department secretary, have not yet given guidance on the state going into the green coded phase.

“We wanted to have a role in the back-to-business project,” Sawyer said. “Once we began to realize we were going to be opening in the yellow phase, we began the initiative.”

Sawyer and others with UPMC partnered with the chamber and United Way to provide packets that included locally-made hand sanitizer, hand washing signs and links to online resources with information.

“Consumers can know that these stores are open,” he said, handing out purple star-shaped balloons provided by a local party store.

“If you don’t have corporate partners, this doesn’t work,” said Ron Frick, executive director of the Lycoming County United Way.

“Look at the people. They are thrilled. Alabaster Coffee and Tea was open and the sun is out,” Frick said.

“We believe that the non-profits and the business community need to work together and need to figure out a way that the community knows that we also pull each other up,” he said, turning serious for a moment. “Our businesses need to know they can support human services organizations in the community. It is all tied together.”

Help the Helpers campaign is what the group called the event.

“We wanted to be able to get out and to recognize some of the businesses that are now starting to reopen,” said Jason Fink, CEO and president of the Williamsport/Lycoming Chamber of Commerce.

Fink joined the group to bring more attention to the fact these businesses reopening are welcoming to customers here locally.

“Folks that have that pent-up demand can go shopping or do whatever, pick up a coffee and get out and now is your chance,” Fink said.

UPMC also provided a booklet, which detailed how to properly wear a facial covering, and social distancing and disinfecting and cleaning surfaces and hands.

Information was provided by U.S. Centers for Disease Control and Prevention and Occupational Safety and Health Administration, Sawyer said.

UPMC has also worked on providing tele-education, bringing attention to local legislators, who are calling for businesses to be able to reopen safely, and an infectious disease team and Employee Assistance Program to help get businesses back open in a safe and healthy way, he said.

“It’s people coming together to try and figure this out,” Frick said. “None of us really have all of the answers but, collectively, we’re coming up with them.”