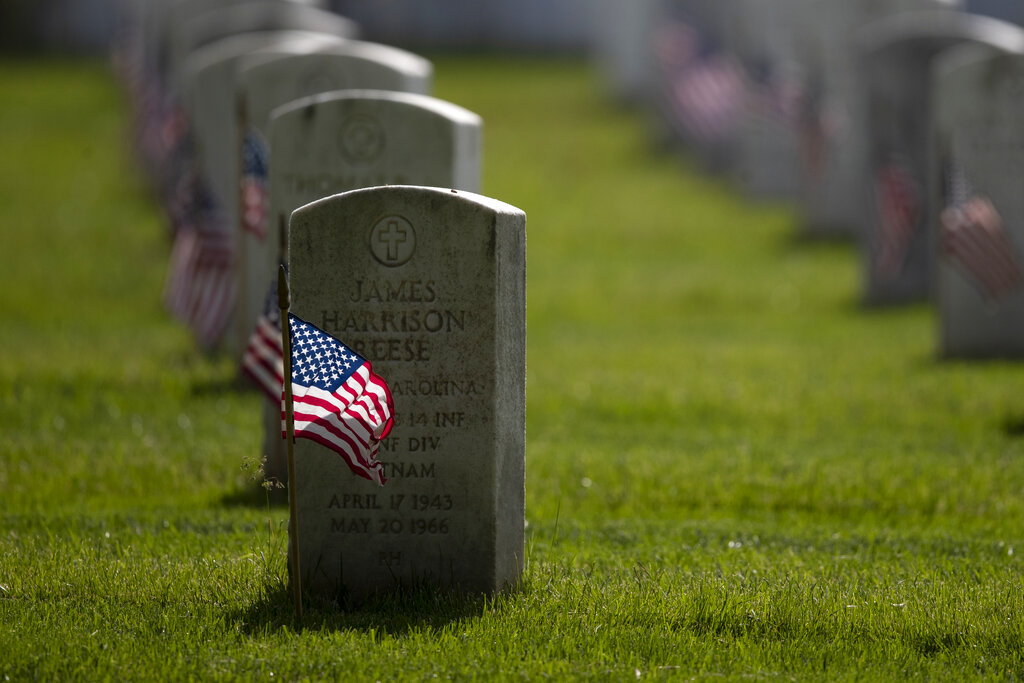 American flags are placed by members of the 3rd U.S. Infantry Regiment, also known as The Old Guard, in front of each headstone for "Flags-In" at Arlington National Cemetery in Arlington, Va., Thursday, May 21, 2020, to honor the Nation's fallen military heroes. (AP Photo/Carolyn Kaster)

In lieu of parades and ceremonies, area veterans’ groups recommend silent observance to honor those who have fallen and donations to charities to support those who are still with us.

The thought of a quiet Memorial Day, where people would usually gather together, is somber, said Angie Shaylor, manager of the Muncy American Legion and an auxiliary member.

“It’s going to be a very, very sad Memorial Day without that service and parade,” she said. “I’ve been having it all my life and just to not have it this year — it will not be the same.”

For many, this year’s day of remembrance will be one of introspection, she said, as she remembers her family members who have served.

“I will probably just take time on Monday to walk through the cemetery, just walk through to read the names on the headstones just to get some information and history,” she said. “A lot of those headstones in Muncy are a lot of older ones. It’s just a nice quiet time and it’s supposed to be a nice day.”

She also plans to put out her American flag and father’s hometown banner, which hung in Williamsport for a time.

Memorial Day is also critically important for the younger generations, many of whom seem to be forgetting its value, she said.

“I really wish the kids would understand more about what Memorial Day is. They don’t seem to want to get involved in it like they used to,” she said. “Its just a shame, but hopefully, when people see that it’s not going to be here this year, that next year they come out.”

The Montoursville American Legion post plans to hold a virtual celebration with a clergyman, active duty military members, community members and others speaking.

Rupert’s daughter, MaKenzie Rupert, the auxiliary member of the post in charge of editing the video, said the platform offers a ceremony that isn’t normally possible.

“It’s a really unique opportunity to bring all these individuals together when we’re encouraged to stay apart but want to stay together for our fallen veterans and remember the sacrifices they’ve made,” she said. “I know a lot of people are going to want us to be in the cemetery but this is a really awesome alternative. It also allows us to see the perspective of Memorial Day from all different community members that we couldn’t collect in our normal ceremony.”

There has been an overwhelmingly positive response online for her efforts in putting the video together, which will also be posted on YouTube for future viewing, she said.

“It’s going to be around forever so that the story of what’s happening in Montoursville will spread,” she added.

John Markley, retired command sergeant major, and manager of Veterans Memorial Park along Wahoo Drive, said that although there is no ceremony, people are still invited to come to the park Monday.

“We do want people to go up and enjoy the park because it is a great place to go and remember the people who gave us the supreme sacrifices,” he said.

Otherwise, he recommends people display their American flags and reflect on those service members who have died.

Those looking to help veterans today may make donations to Hometown Heroes, Military Share out of the DuBoistown VFW post and other groups like the area Korean War Veterans, American Legion, Veterans of Foreign, and others said Ronald K. Poust, director of Lycoming County Veterans Affairs.

“Those are all worthy organizations,” he said.

Angel Fortin, manager of the Military Share program out of the DuBoistown VFW post, said, “The circumstances as they are right now make it difficult to be in a large gathering, so that’s taken away most of the Memorial Day services”

The VFW post, which feeds 475 families of veterans in the area, still plans to have its avenue of flags, where the entire front of the property is lined with their flags.

“It’s really hard but I would say the biggest thing is to hang the American flag to remember our freedom and what they fought for,” she said.