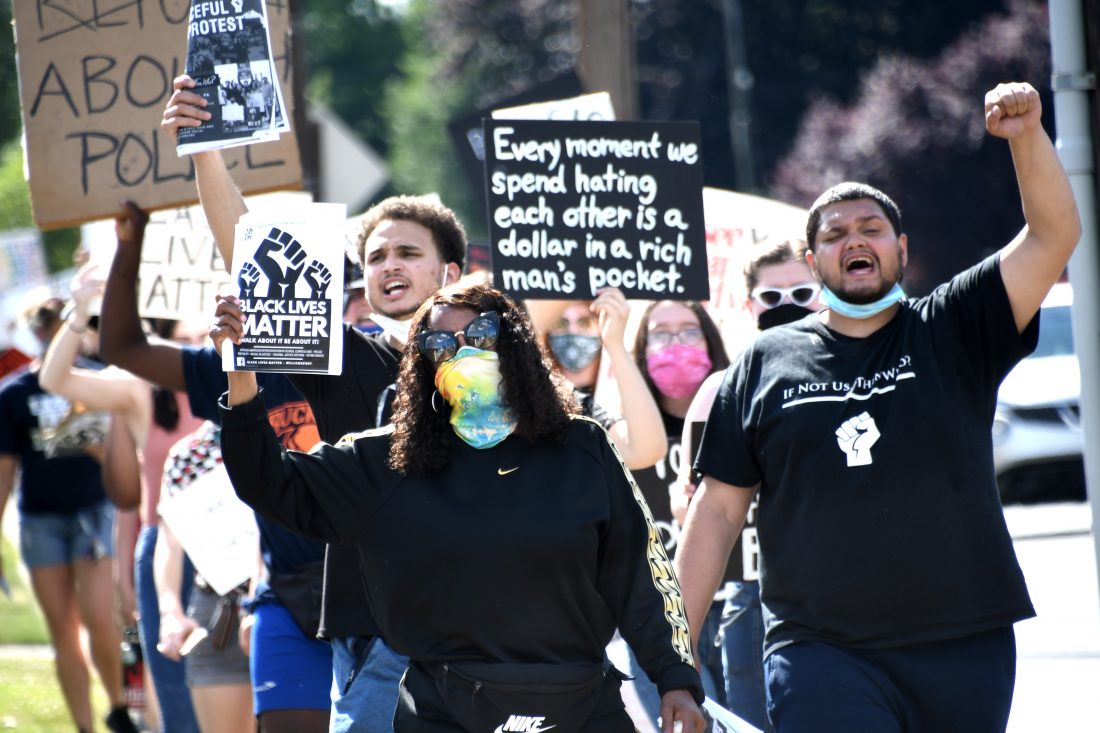 MARK NANCE/Sun-Gazette Local groups march down Broad Street in Montoursville against racism Friday afternoon. The group began at the CVS parking lot and marched down Broad Street to the corner of Loyalsock Avenue shouting chants along the way.

With 38 percent of the district’s student population comprised of minorities and with protests against racial inequity in this country, the Williamsport Area School Board went on record recently to support “the development of an anti-racist school climate.”

“We are deeply saddened and outraged by the recent killing of George Floyd and violence against black men and women,” states a resolution adopted by the board. “The subsequent protests have shined a spotlight on the harmful effects of racism and inequality.”

The public’s response has “highlighted the racial trauma our black students, families, staff and communities have not only endured for centuries but continue to face today,” according to the resolution. “We must recognize that racism and hate have no place in our schools and society.”

To accomplish this, the board said the lived experiences and stories of the staff, students, families and communities who have historical endured discrimination and marginalization must be heard.

“Therefore, it is essential that we establish an expectation that a diversity of students, families and community members, specifically those that have been ignored, discriminated against and marginalized are heard and included on substantive school and district issues,” it continued.

The district will seek to educate itself first and then the community on the “historical and current impact of racism and discrimination on our students, families and communities as well as understand our role in perpetuating such inequity.”

In addition to professional development, the board will seek “opportunities for honest dialogue and listening sessions” to build community partnerships focused on “overcoming racism and other barriers.”

“By doing so, we can create partnerships in the community to ensure that each child has the tools and supports to thrive,” it said. “Our students, no matter their race, ethnicity, religion, gender, sexual orientation, socioeconomic status, language ability, disability and other identities, deserve to feel safe, to feel seen and to feel affirmed.”

The board agreed to “unequivocally stand firm in our collective responsibility to foster an equitable and inclusive environment.”

Speaking of the resolution, Dr. Timothy S. Bowers, district superintendent, said that the district has been working on professional development ideas in relation to this issue.

“We’ve done some work internally. We have not gone all the way through with that work yet. Obviously we still have a lot of work to do,” Bowers said.

“This will be a topic further discussed and developed as part of the district’s goals for the 2020-21 school year, Bowers said.

“I think it was a great first step for the board to adopt the resolution,” he added.