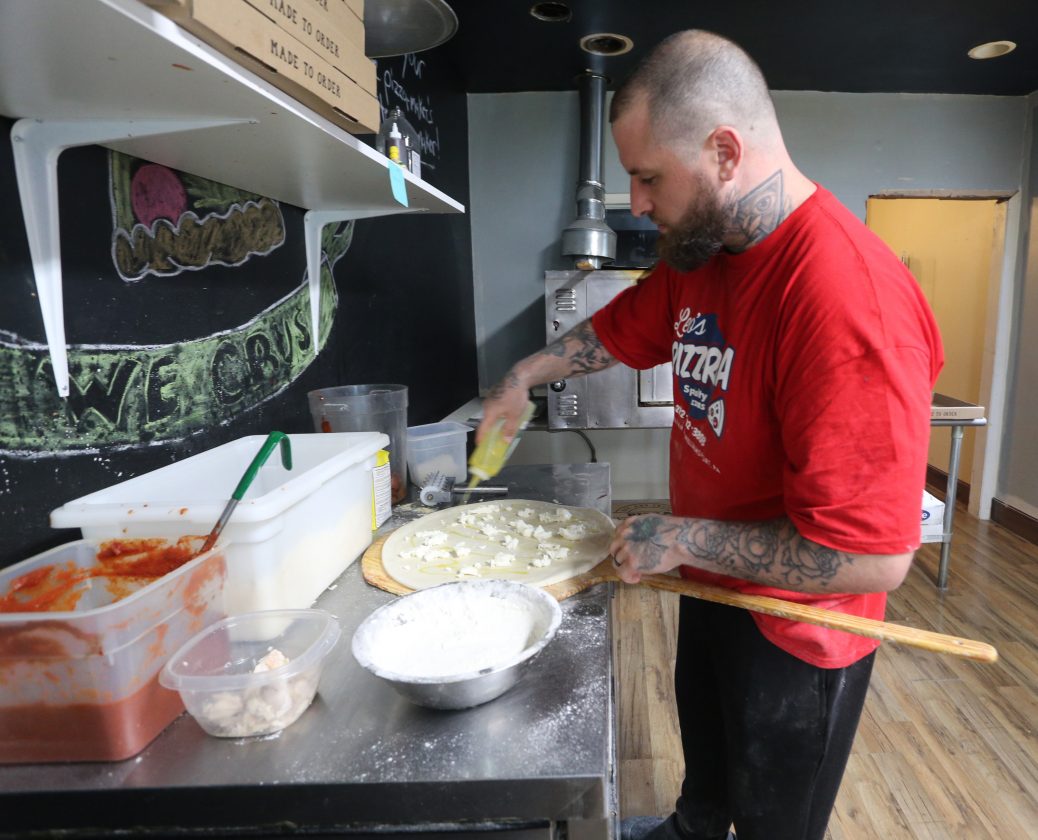 Mark Mangiardi, owner of Leo’s PIzzeria, makes a pizza at the shop in Williamsport on Tuesday. KAREN VIBERT-KENNEDY/Sun-Gazette

Less than a year into his business and with the uncertainties of a pandemic, a local pizza shop has repeatedly worked to provide free food to children, the elderly and emergency workers.

Mark Mangiardi, owner of Leo’s Pizzeria, at 458 William St., as well as his brother-in-law Bradley Sanguinett as his only employee, said he’s trying to set an example through his donations.

“All these shops have been around here for 20-plus years,” said Mangiardi. “These (businesses) rely on all these people, and now people are relying on them.”

“I’ve only been here eight months and I feel like I’ve done more than almost any single shop,” he added.

While it’s true businesses have been having difficulty, it’s also emblematic of a community that is hurting.

One of the first works of charity Mangiardi said he carried out was giving to children who lost meals as school lunch programs stopped providing, which ran several months until June 6.

“That was completely free,” he said. “Some of the schools gave us names of families that really needed it, so we made sure to take something to them.”

It “opened my eyes” to learn how reliant many families are on the food they receive during the school year, he said.

“If there’s ever a hungry child when people come in here and they don’t have money,” Mangiardi said he would help them. “It’s not about that.”

“That’d be something that kid will remember forever,” he added.

Money wasn’t on his mind either when he donated more than $19,000 to UPMC in food as he opened the pizzeria’s menu up for workers to order anything they wanted, free of charge, he said.

Not just those at the hospital preparing for COVID-19, but employees and nursing home residents at ManorCare Health Services in Jersey Shore, where Mangiardi and helpers delivered 100 pizzas in an ambulance, to help those hardest hit by the disease.

“It was fun to help — knowing that it was going to the residents up there,” he said of his donation at the beginning of June.

With the staff also being unable to go anywhere, Mangiardi said he wanted everyone to be able to have food from the outside community.

“The staff was very excited because that was the first time someone reached out to do something for the residents,” she said.

Many residents were isolated in their rooms without activities or visitors.

“They were starting to get really down in the dumps,” she said. “It was a big pick-me-up for the residents.”

Mangiardi brought “such an abundance of pizza” that there were plenty of leftovers for the residents to eat over the next few days and some of the financially-struggling staff to take home to feed their families.

This was repeated several more times as he donated pizzas to Elmcroft of Loyalsock and the ManorCare facility in Williamsport, among others.

For any charity in return, Mangiardi said the thank-you cards, which could fill a wall, are enough.

“My customer is not specified to any type of person, or any type of business. I want everyone to come here and enjoy the pizza I’m working so hard to make by hand,” he said. “If giving back and helping people ends up helping me, great. If it doesn’t, I was still able to help somebody. … I like to let everybody know that we’re here for them, and they’re here for us as well.”