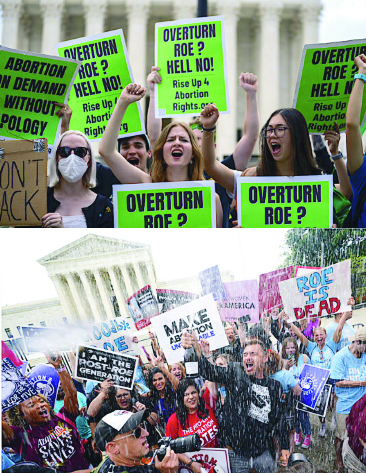 Since Friday’s historic ruling by the U.S. Supreme Court on Dobbs v. Jackson Women’s Health Organization, which also knocked down 50 years of precedent concerning abortion in Roe v. Wade, there have been questions asked about what comes next.

In the medical field, business as usual is the word from the two local health care systems, while individual physicians wonder what limitations they will have in providing patient care and what the legal ramifications of the ruling will be for them.

In Pennsylvania, abortions are permitted during the first 24 weeks of a pregnancy. The current state administration has committed to upholding abortion care for its residents, but when a new administration is elected this fall, will they abolish it completely as one candidate for governor advocates, or will it remain the same?

“If they outlaw abortion outright, then even in cases where it is necessary to save the life of the mother, abortion providers will be met with extreme difficulty including risk for criminal action against the physician,” said Dr. Natasha Alligood, a local gynecologist/obstetrician.

Looking at it through the lens of a physician who wants to offer the best care for patients, Alligood sees what that will look like if Pennsylvania bans abortions at any stage of pregnancy.

“I would say it’s not a question about what the outcome will be — we’ve had this wonderful natural experiment since 1973 called Roe v. Wade — we have lots of data to look back on, not just pre- and post-Wade, we’ve been able to examine outcomes as they relate to state-based restrictions on abortion,” she said.

When abortions were illegal, the rate of the procedure didn’t necessarily go down, but the number of deaths and pregnancy-related injuries from delayed care and illegal abortions went up. And, disproportionately, the poor and Black women were affected.

“We have, on a nationwide level as well as the international level, found that making abortion illegal or difficult to access does not actually decrease the rate of abortion,” she said. “To say what would happen if abortion became illegal in the state of Pennsylvania — we know based on the natural experiment that was Roe v. Wade — we know that abortion care would be delayed. We know that women would have to travel further to which places them into the second trimester for abortion care.

“We know that some women would be driven to seek care underground through illegal abortion, which of course has greater risks because it isn’t regulated. Some women will die. We know if we outlaw abortion there will be pregnancy-related deaths related to illegal abortion,” Alligood said.

Pennsylvania may have access to legal abortions at the moment, but, according to Alligood, there are “pretty heavy restrictions on abortion and those restrictions are meant to serve as a barrier to care.”

If the state were to outlaw abortion under a new administration, Alligood argued that would not only impact women in this state, but also those from surrounding states where women don’t have legal access to abortions. They would no longer be able to come here for abortion care.

Medication abortion is actually the most common form of abortion and is safe and effective when utilized in early pregnancy in the first trimester, Alligood noted. The FDA-legalized drug, mifepristone, is used for medication abortions.

Although it was legalized by the FDA, Alligood said that “we see many states working to restrict access to mifepristone including the state of Pennsylvania.”

These states are now going after medication abortion by mail making it more difficult for women who don’t have access to a provider in person. Those women in theory could get tele-medicine counseling and receive those medications by mail, but that is now heavily restricted by the majority of states, including Pennsylvania.

What about access to birth control? Alligood sees the potential risk for that to become restricted.

“Absolutely. I feel that way based on the legal arguments the conservative Supreme Court used for overturning Roe v. Wade,” she said.

This fear is prompted by the way in which Justice Clarence Thomas referred back to the case that legalized contraception for married couples when he said to look at prior precedent as well.

“We know that restricting access to abortion doesn’t make it less common, it just makes it more dangerous for women. We know the only way to reduce the rate of abortion is to reduce the rate of unintended pregnancy, but this is really a consequence of ideology finding its way into the political realm and into the law. We have lost the inability to work on bipartisan ways to create a healthier and happier society,” she added.

What are left are a lot of gray areas, Alligood said.

“There’s a lot of uncertainty here. Not just among myself and my fellow physicians in the state but nationwide. We fear on the patient side, the implications and negative outcomes on women’s health outcomes. We also fear on the physician’s side the legal implications of providing necessary care,” she said.

“For example, the treatment of an ectopic pregnancy where you may have an embryo with a heartbeat and the woman is bleeding to death and that embryo is not compatible with life. Does treating that woman emergently to save her life place the physician at risk of going to jail? We don’t know,” she said.

“Does treating a septic abortion where maybe you still have a heartbeat in the uterus but the woman is infected and the woman needs to be evacuated, does that constitute an abortion and does that place the physician at legal risk? Because you have so much gray area in the law, because again the law is made without the input of the experts, you have women at immediate risk,” she added.

Those gray areas could be translated into just not knowing what’s going to happen next.

For instance, could a doctor who refers a patient to another state where abortion is legal be open to prosecution if their home state outlaws the procedure?

“We don’t know yet. It depends on what sort of legislation is passed and whether that would be constitutional,” said Clifford Rieders, a local attorney who specializes in Constitutional law.

“A state that decided to outlaw abortion altogether may or may not attempt to make it a crime to go to another state for an abortion. So, it’s not automatically going to be a crime unless the state tries to make it a crime,” he said.

If a state that outlaws abortion tries to make it a crime to go to another state for an abortion, Rieders noted, that would fall under the part of the Constitution that has guaranteed interstate commerce and interstate travel.

“But, that’s all in the future and that is very speculative,” he added.

“If Congress or the state that doesn’t permit abortion would try to attempt to pass a law to search for a provider in a state that does permit it, they would, of course have to pass a specific law to to that. And I think that the constitutionality of such a law would be very questionable,” he said.

With so many unknowns with the end of Roe v. Wade, the tendency is to launch into hypotheticals, such as these questions, but Rieders cautioned against doing that.

“What’s happening here, and it happens all the time whenever a major Supreme Court decision comes down. People become hysterical. Sometimes it’s legitimate and sometimes it’s not,” he said.

Although everyone has a right to ask hypothetical questions, Rieders noted that “the likelihood of there really becoming a serious problem is not very likely or for any of these problems to occur, but who knows, anything can happen,” he added.

Rieders did address one of the concerns expressed by Alligood. What happens if in order to save the life of the mother, such as in an ectopic pregnancy, termination of the pregnancy is medically necessary.

“We don’t know yet because we don’t have that happen yet. So, the states that decide to make abortion illegal, if there are states that do that, the question is going to be whether they permit abortion in order to save the mother’s life. If they do, that question becomes irrelevant and if not, then you have a new constitutional question that needs to be answered and that is whether a state can jeopardize the life of a woman who is carrying this baby if her life is in danger,” Rieders said.

If a state bans abortion, including when the mother’s life is at stake, “you’re going to raise the issue as to whether a state can endanger a mother’s life by prohibiting abortion when her life depends on performing the abortion,” he said.

Rieders pointed out that the decision did not specifically ban abortions, it took the question away from the Constitution and placed it in the hands of state governments.

“They merely said the Constitution does not require permitting abortions,” he said.

Testimony wraps up in trial for 2020 homicide

The Montoursville Area School Board discussed possible decisions on a school buildings renovation project at its ...

UnityLab, the company behind the brands Hoffman-NewYorkers and Unity Laundry Systems, announced Thursday a $4.5 ...

What other newspapers are saying: Congress, leave abortion to the states