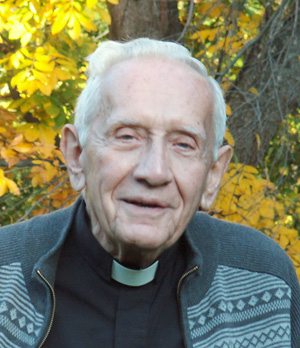 Fr. Dincher began his vocation as a missionary in the Jamshedpur Province, India in 1952. He worked in parishes in Jamshedpur, the Chaibasa area, Purulia and Dhanbad. Throughout his mission work he built churches, convents and schools in the areas he served. For several years he worked as rector of DeNobili School and director of branch schools. Later his ministry changed to his work as a retreat preacher and spiritual counselor. Superior and director of the retreat house in Jesu Bhavan, Mango, Fr. Dincher became a popular retreat preacher for priests, religious and laity from throughout India and abroad.

In addition to his parents, Fr. Dincher was preceded in death by two brothers, Louis Dincher and Richard Dincher, and a brother-in-law, Clarence Shurer, all of Williamsport.

Fr. Dincher is survived by a sister, Barbara Shurer, of Williamsport; sister and brother-in-law, Mary Jo and Tom Murray, of Bradenton, Fla.; and sisters-in-law, Dottie Dincher and Jane Dincher, both of Williamsport.

He was buried in his beloved India. A Mass of Christian Burial was celebrated at St. Joseph’s Cathedral, Golmuri, Oct. 13, 2016.

In Fr. Dincher’s own words, “I have found my happiest days in India were in the villages. I came to love the people there very much and have found that though they were extremely poor, they would share whatever they have. I love the people in India. I get homesick for them. The mission work hasn’t been easy, but it has been a joy.”