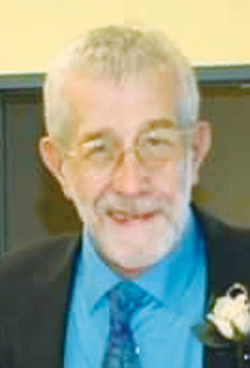 An avid lifetime learner, John attended Williamsport schools (Class of 1968), the Williamsport Area Community College (now Pennsylvania College of Technology) and Lycoming College, with a human services/education emphasis. He started working for the City of Williamsport as a city clerk, then joined the Williamsport Bureau of Police where he retired as a captain on July 1, 2001, marking 30 years with the city. John was a graduate of the Allentown Police Academy (Class 11), the Drug Enforcement Administration’s National Police Training Institute (Police Training Class 3). He developed a reputation for working with great sensitivity with mental health situations as well as with families and victims in crisis.

After retiring from the city, John attended Church Leadership Institute (CLI), now Academy of Christian Training and Service (ACTS), for the American Baptist Churches of Pennsylvania and Delaware. He became a certified lay minister on Jan. 24, 2004, and earned his permanent certification on Dec. 7, 2014. He was a graduate of the Nehemiah Leadership Network (2011-2013). John served as a supply pastor, interim pastor, church moderator and worked for Lock Haven University as Protestant campus minister. At the time of his retirement on April 30, 2019, John had served for the last ten years as the pastor at First Regular Baptist Church of Huntingdon.

In addition to being the pastor at First Regular Baptist Church, he was also a member there, and belonged to Fraternal Order of Police (FOP) Lodge No. 29, Shriners, Free Masons and Seven Mountains/Susquehanna Critical Incident Stress Management (CISM) Team (previously Susquehanna Valley CISM Team) as a team leader. John was also a charter member of the Lycoming County Domestic Violence Fatality Review Board.

John was born on June 5, 1950, in Williamsport and was the son of the late John C. “Jack” and Elizabeth “Betty” (Powell) Staje Sr.

John was married on Sept. 4, 1992, to Kathy (Gridley) Staje, who survives, and they would have celebrated 27 years of marriage this fall. John is also survived by his children, Ryan and Erin, both of Williamsport; one sister, Carole D. Heilig (Charles), of Huntingdon; nieces Cady (Keith), Cass (Mike) and Cailin (James); and mother-in-law, Amy Gridley, of Williamsport.

In addition to his parents, John was preceded in death by his father-in-law, Gerald M. “Gerry” Gridley.

There will be a public visitation from noon to 3 p.m. Tuesday, May 7, at the Maneval Allen Redmond Funeral Home, 500 W. Fourth St., Williamsport, where the memorial service will be held at 3 p.m. Rev. Mark Mahserjian-Smith will officiate the service. Private interment will be held in Wildwood Cemetery at the convenience of the family.

In lieu of flowers, memorial contributions may be made to the Seven Mountains EMS Council/CISM (523 Dell Street, Bellefonte, PA 16823).