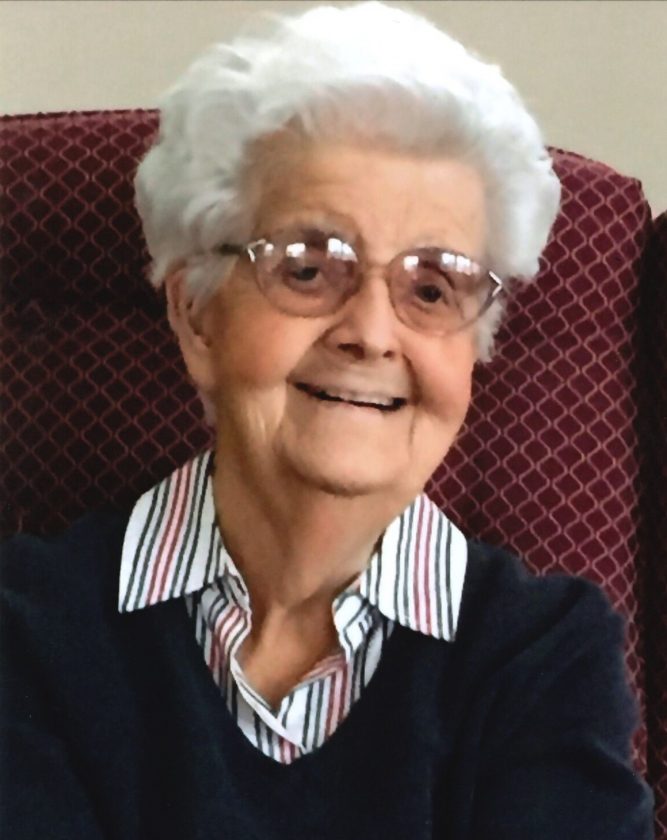 Margaret L. Fisher Mortimer, 98, of Pleasant Gap, passed away peacefully on Wednesday, June 19, 2019, at The Oaks at Pleasant Gap.

Born June 9, 1921, in Pennsdale, she was the daughter of the late William James and Helen Mabel Brown Fisher. On June 4, 1940 she married Eugene L. Mortimer.

Margaret, predeceased by her husband, son, Garth E. Mortimer, seven brothers and three sisters, was the last of her generation.

She is survived by daughter, Barbara L. First and her husband, John, of State College; daughter-in-law, Ann, of Horseheads, New York; five grandchildren, Julianne, Timothy, Melissa, Elizabeth and Suzanne; six great-grandchildren, Devin, Erik, Victoria, Reed, Aleksei and Peter, a great-great-grandchild due in July and many nieces and nephews.

Margaret graduated from South Williamsport High School in 1940. She and her husband’s families were from South Williamsport. They moved to Mansfield in 1952 where Eugene was a high school teacher and Margaret worked as a store manager at Finesilver Clothing and Gift Shop. After the closing of the store, she worked in several other shops in the town.

She was a friend of the First Methodist Church in Mansfield, where she attended Sunday school class, helped with many church dinners and charitable functions, and shared many friendships.

Margaret enjoyed many craft hobbies with friends and grandchildren. Her most prolific was crocheting afghans — heritage ones to each grandchild and many more to relatives and friends.

Margaret was the quintessential ambassador of Mansfield — visiting and caring for the elderly in town and at the Greenhome. She took on the same role at The Oaks until the last few weeks. She “never met a stranger.”

In lieu of flowers, memorial contributions may be made in Margaret’s honor to The Oaks at Pleasant Gap.

Arrangements are under the care of Koch Funeral Home, State College.

Online condolences and signing of the guest book may be entered at www.kochfuneralhome.com.