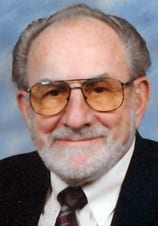 He was born Jan. 2, 1928, in Warrensville, a son of the late Ralph and Corrin (Hartman) Calvert, and was raised by his step father, William G. Hauke Sr.

Cecil graduated from Hepburnville High School, was a U.S. Army veteran stationed in Belgium during the Korean War, and was a service manager in many area Ford dealerships. He was a member of St. Mark’s Lutheran Church, Masonic Lodge No. 397 F&AM, AASR 32nd degree and past master, Williamsport Consistory, past president of Loyalsock Lions Club, Retirees Golf League at White Deer Golf Club, and was a competitive cross country skier, stock car racer, and loved hunting and fishing.

In addition to his parents, he was preceded in death by his wife, the former Kathryn A. Ardell, and two brothers, Allen Calvert and William G. Hauke Jr.

A funeral service will be 11 a.m. Monday, Aug. 26, at Spitler Funeral Home, 733 Broad St., Montoursville. Burial will follow in St. James Lutheran Church Cemetery with military honors accorded by the Lycoming County Korean War Veterans Honor Guard. A viewing for family and friends will be from 10 to 11 a.m. Monday, at the funeral home.

In lieu of flowers, contributions may be made to Lycoming County SPCA, 2805 Reach Road, Williamsport, PA 17701.