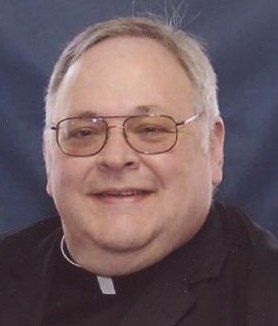 He was born in Somerset, son of the late John G. and Yolanda B. (Lapina) Legarski.

Surviving are his sister, Dorothea Bacher and husband, Randy, of New Alexandria; a brother, John G. and wife, Mary Etta, of Trout Run; two nephews, Christopher J. and wife, Elizabeth, of Muncy, and Stephen P. and wife, Teresa, of Colorado; two great-nieces, Alivia and Briana; and great-nephews, Brayden and Luca.

Fr. Tony graduated from Somerset Area High School in 1975, then Saint Francis University in 1979 with a Bachelor of Arts in political science. He completed his seminary studies in 1983 at Mount St. Mary’s Seminary, where he earned a Master of Divinity Degree and a Master of Arts Degree in systematic theology. He was ordained to the priesthood for the Diocese of Altoona-Johnstown in 1983.

He attended the U.S. Naval Chaplain School in Newport, R.I., commissioned as a lieutenant junior grade in the Naval Reserves in 1990. For eight years, he served on active duty in the U.S. Navy Chaplain Corps with tours of duty at Naval Training Center, Great Lakes, Ill.; Camp Lejeune, N.C.; and Naval Weapons Station Earle, Colts Neck, N.J. He was honorably discharged from active duty March 1, 1999, with the rank of lieutenant commander. Fr. Tony returned to the Diocese of Altoona-Johnstown in March 1999.

Fr. Tony served as a priest in the Altoona-Johnstown Catholic Diocese for more than 36 years, most recently serving St. Mary Catholic Church, Hollidaysburg, for the last 14 years.

He was very active as Chaplain of the Knights of Columbus Star of the Sea Council 4245 in Hollidaysburg, where he was a fourth-degree knight. He also served as Chaplain for the Catholic Daughters of America and served on the Diocesan Marriage Tribunal and Permanent Deacon Review Board.

Fr. Tony enjoyed hunting and fishing with parishioners and talking about Notre Dame football, as well as digging deep into spiritual discussions. He enjoyed participating in many civic activities like Memorial Day and Veteran’s Day. He was honored with the presentation of an award for his distinguished service to country and community.

Friends will be received from 6 to 8 p.m. Wednesday, Nov. 13, and from 2 to 4 p.m. and 6 to 8 p.m. Thursday, Nov. 14, at St. Mary Catholic Church, Hollidaysburg, where a vigil service will be held. A funeral mass will be celebrated at 10 a.m. Friday, Nov. 15, at the Cathedral of the Blessed Sacrament, Bishop Mark Bartchak, celebrant. Interment with military honors will be held at Somerset County Memorial Park at 2 p.m. Friday.