Fewer home runs is a credit to bats 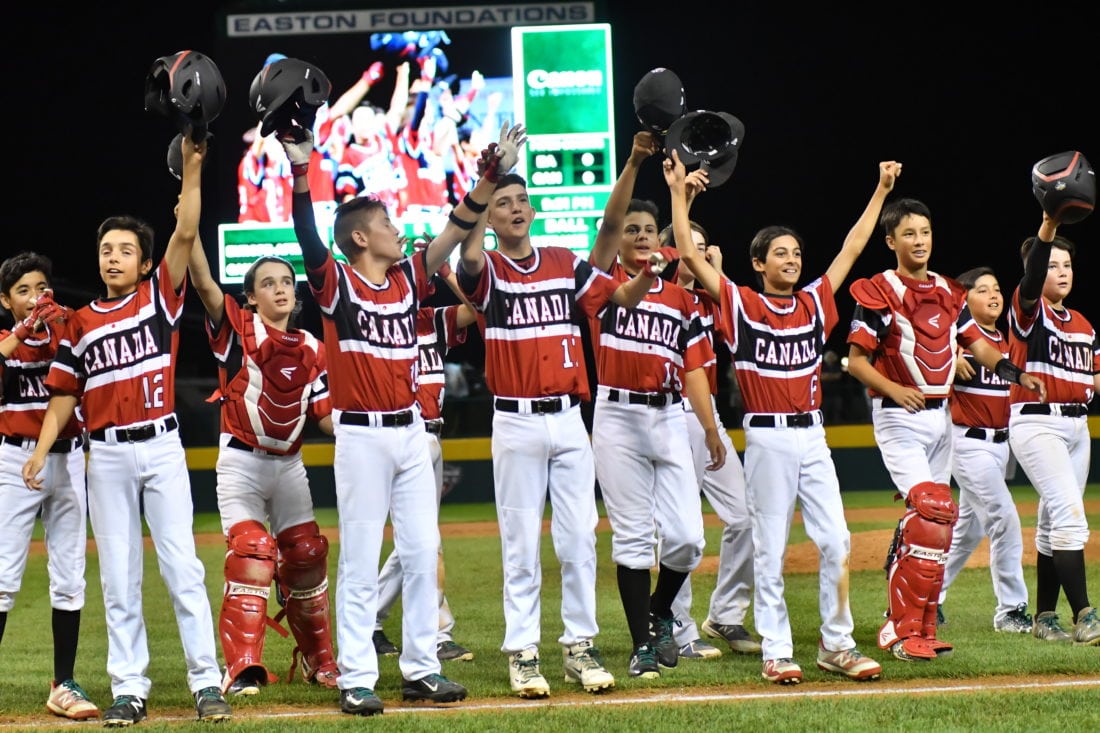 MARK NANCE/Sun-Gazette There’s been no shortage of exciting, extra-inning games this year such as Canada, shown above, winning a 10-inning game against Barcelona, Spain, on Saturday evening to keep its tournament title hopes alive. But what has been lacking this year opposed to year’s past is a ton of home runs. So far in this year’s Little League World Series, there have been just 12 home runs hit entering Thursday and its a credit to the new bats Little League has adopted for its play.

When Little League Baseball changed its bat rules earlier this year, many focused on the cost impact.

Only bats stamped with the U.S.A. Baseball logo can now be used. U.S.A. Baseball approves all those new bats, so every bat parents had bought their children in the past essentially become an illegal relic.

What many missed, however, was how the new bats would impact the game. And the Little League World Series has perfectly provided the answer. The new bats have changed everything. The new bats are designed to mimic wood bats and slow the exit velocity of balls coming off bats, what some refer to as “the trampoline effect.” The bats feature a 2 5/8 inch barrel and are specifically designed to have less pop.

Consider that mission accomplished. After four days at the Series last summer, 31 home runs had been hit. At that same point this year, just seven were hit, including only one by an American team.

“I called it before we left. I said ‘there’s going to be less than half the home runs there were last year,'” Australia manager Brent Iddon said. “It keeps the ball in play more which is great for baseball.”

“You ask any coach and they’ll tell you those bats make a difference,” Hawaii manager Gerald Oda said. “It’s good and bad.”

Oda and every coach interviewed, however, say the good far outweighs the bad. Oda’s only concern was that not every player is built the same. Especially with 13 year olds no longer being able to play Little League Baseball next year, his concern was that the smaller players who are not yet as physically developed could struggle hitting the long ball.

Iddon added that umpires might look at shortening the strike zone in coming years. The Little League strike zone tends to be much larger than a high school-type zone. With the bats lessening some offense and power, Iddon said shortening that zone could be a way to give some advantage back to the hitters.

All coaches agree, though, that it was time for a change. And all like the changes the bats have generated. That goes double when it comes to safety. As kids grew stronger, the old bats were becoming like weapons. The new bats provide defenders more time to react.

“A ball coming off the bat a much more manageable speed and there are not as many home runs,” Rhode Island manager Lou Simon said. “I’d rather see kids’ safety come first. (In Little League), you’re closer to the mound, closer to first, closer to third some of the balls coming off the bats the last few years were just scary. Between the bat changes and the age changes I think it’s going to make Little League a lot safer for the kids which should be the priority.”

Little League games also were becoming more Home Run Derby and less baseball games. That was the case throughout the early 2000s and Little League adapted by moving the fences from 205 to 225 feet at Lamade and Volunteer Stadiums.

As kids and bats grew stronger, the longer distance did little to slow the long ball-barrage. Multiple home runs became the norm and a game that featuring no home runs became rare. Every player seemed capable of driving the ball over the fence and the 2015 world championship became an 18-11 slugfest in which Japan erased an eight-run deficit and defeated Red Land, Pennsylvania, 18-11.

“It’s not just go up and barrel the ball and flip it over the fence because that’s what, quite frankly, was happening,”Michigan manager Kurt Barr said. “This brings it back to baseball.”

“The good thing about it is that it’s been more of a defensive/pitching thing,” Oda said. “Sometimes (in the past) you just throw the bat out and it can go. With these bats it will not go. That’s the probably the good thing.”

There have been countless examples at the Series in which batters make good contact and the ball appears headed deep. The sound coming off the bat is similar to the one heard on home runs in years past, but many of these balls have turned into routine flyouts instead of sailing over the fence.

Hawaii’s Aukai Kea hit the only American home run during the Series’ first four days when he slammed a two-run, walk-off shot that beat Georgia, 2-0, in 11 innings last Friday. But even he was surprised the ball made it that far.

“I feel like this year the bats are kind of toned down. It’s harder for the hitters to get on base,” Kea said. “I thought that (home run) ball was gone, but it just hopped over the fence by luck. If that was with the other bats I’m pretty sure I would have hit someone on the hill.”

That decreased power has helped create more competitive games as well. Entering the U.S. Final Four, only one game had been determined by more than three runs. Michigan twice erased four-run deficits to win and Georgia rallied from down three with two outs in the sixth inning to beat Texas, 7-6, in nine innings.

So much more strategy is needed now. Coaches cannot simply wait for their boppers to crush home runs that change the game’s complexion. Instead of station-to-station baseball, running the bases, being smart on the bases, bunting and offensive fundamentals are now critically important.

“A lot more speed on the bases becomes more important. First and second in the past and you get a home run and three runs score,” Simon said. “Now you hit to the gaps and those were home runs in the past. You have to be able to read them and get a good jump on the ball. It makes them read the ball and run the bases a lot more.”

“I have to rethink a lot of my strategy because it’s really hard to hit a home run on a 225 field in Little League these days,” Barr said. “I love the quality of baseball that is being played. It forces defense, it forces small ball, it forces you as a manager about how do you move guys over and about sacrificing. It’s fantastic.”

Defenses are adapting as well. Hitting the cut-off man, taking good angles to prevent singles from turning into doubles and keeping balls in front are so vital now with every base counting so much. As the offensive game has changed so have defensive strategies and some International teams utilized defensive shifts as they tried keeping opponents off the bases.

“I just wish it was the old bats so it would go farther and we’d get more hits,” Hawaii’s Ka’olu Holt said. “It would be more exciting because there would be more hits and it would be hard for the pitcher.”

Opinions might vary on the new bats vs. the old bats. But one fact cannot be denied.

The new bats have forever changed the Little League game many have known for so long.