Georgia rallies back from 3-run deficit 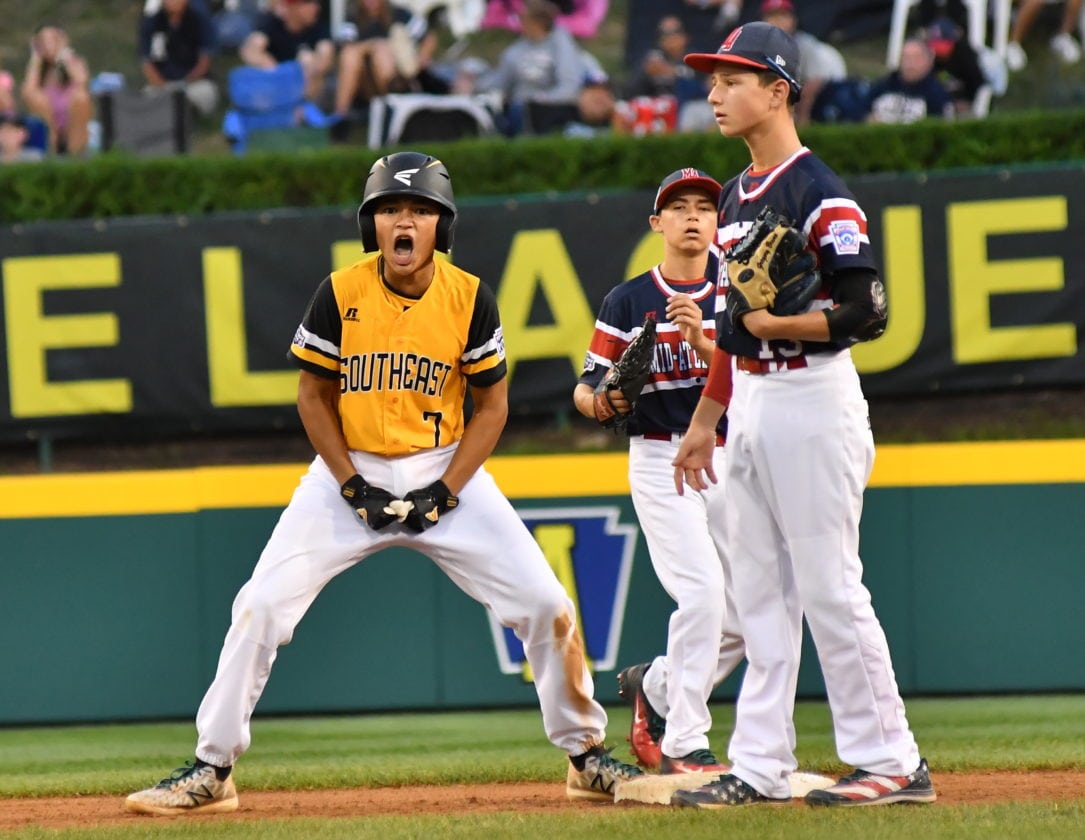 MARK NANCE/Sun-Gazette Tai Peete celebrates after making it to second base in the first inning at Howard J. Lamade Stadium against New York on Thursday night.

Peachtree City, Georgia took the long road. It was filled with some bumps and nothing came easy.

But the Southeast champions are right where they want to be. Peachtree City’s American Little League all-stars are one of the country’s two best Little League teams. And Saturday, they have a chance to become the best.

Hawaii edged Georgia, 1-0, in 11 innings in the Series opener for both teams, but Georgia has stormed back and won its fourth straight elimination game last night, overcoming a 3-0 deficit to do so.

“It’s been very stressful for me and the other coaches to be in games like we’ve been in. We haven’t had any easy games, but the kids don’t feel the same stress we do,” Georgia manager Patrick Gloriod said. “There’s a huge sense that we can come back from anything. I can’t believe I’m sitting here getting ready to go into the championship game after that game on (last) Friday night.”

Believe it. Georgia continues receiving steady contributions throughout its roster and Peete delivered a gutsy pitching performance while the bottom of the lineup helped change the game’s complexion.

Put it all together and Georgia has a shot at becoming the first U.S team since Hawaii in 2010 to lose its first Series game and then come back to win the championship.

“I just knew we were going to win that game after we scored once and then twice,” Peete said. “We just kept going and going.”

New York lost its last two Series games, but achieved so much for the Mid Island Little League this summer. The Mid-Atlantic champions won 28 straight games over the past two seasons before losing to Hawaii and Georgia on consecutive nights.

This is a team of tremendous competitors and players, obviously, were upset following last night’s loss. Finishing third in the country, however, is quite an achievement.

“I can’t emphasize how hard these kids work. It’s not from June 1 when we started. This has been going on for three years,” New York manager Joe Calabrese said. “It’s a life lesson. You work hard and good things happen.We didn’t win, but they got to Disney World. As they get older and grow up, if they put that same effort that they did the last three years into their lives they’re going to do pretty well and I’m pretty happy about that.”

New York looked poised to reach the U.S. Final when it scored three runs in the top of the first and immediately put the pressure on Georgia. The Southeast champions, though, trailed by three runs with two outs in the sixth inning against Texas and had nobody on base and still won, 7-6 in nine innings.

It was going to take more than an early deficit to rattle this team. Peete doubled, Jansen Kenty hit an RBI triple and Jack Ryan’s RBI grounder pulled Georgia within 3-2 in the bottom of the first. A Connor Riggs-Soper one-out double and two errors gave Georgia a 4-3 second-inning lead and it never trailed again.

Peete was outstanding, shaking off the rough start and shutting down New York over his final four innings. He allowed only two more hits and struck out five. Ben Traxler closed it out in the sixth, working a perfect inning.

Players threw their hats in the air after the final out was recorded and yellow-clad fans stood and applauded. Gloriod applauded Peete following the game. In addition to allowing three first-inning runs, Peete also threw 35 pitches. Over the final four, Peete threw just 50 pitches, saving pitching depth for the weekend and delivering a clutch performance.

“Tai Peete threw 35 pitches in the first inning and to get through five is incredible,” Gloriod said. “That’s nothing I’m doing. This is the kids believing in themselves. For Tai to battle back and throw 50 pitches the rest of the game is just unbelievable and that’s what we need. It’s awesome.”

So was Hoooper delivering a huge hit off the bench. Hooper slammed an 0-1 pitch deep into center field in the third inning, scoring two runs and giving Georgia a 6-3 lead. Georgia added another run an inning later, capping the scoring.

“I’ve been feeling pretty good in the cages and with my at-bats all week,” Hooper said. “I’ve been waiting for it to happen and then I finally got a nice hit and it felt pretty good.”

New York was feeling good in the first inning when it built its 3-0 lead. Chris Bedford opened the game with a single and Steven Martinez followed with a double. Derek Mendez made it 1-0, but Peete nearly escaped the inning from there.

John Calabrese, however, produced a big two-out hit, driving a two-run double to left field. The lead was short-lived, but what New York achieved will last forever.

“It was emotional. There were a lot of tears going,” Joe Calabrese said. “We just have to keep moving on now. This is our last Little League game so it’s time to go to the big field. They were winners. They’re here. They’re winners.”