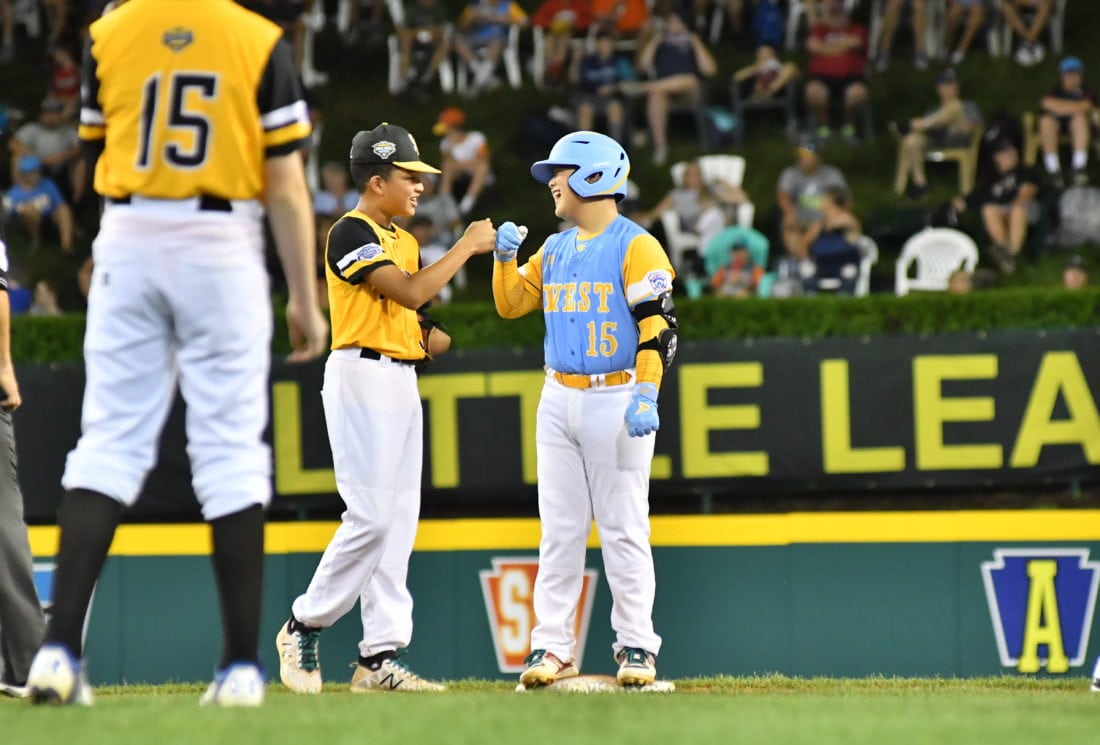 MARK NANCE/Sun-Gazette Hawaii's Sean Yamaguchi receives a fist bump from Georgia shortstop Tai Peete after hitting a double in the first inning during a game at Howard J. Lamade Stadum last week. Hawaii and Georgia play in a rematch today for the United States championship and a berth in the World Series championship game on Sunday afternoon.

Ask Honolulu, Hawaii who it plays for the U.S. Championship Saturday and one might be surprised hearing the response.

Hawaii plays Peachtree City, Georgia, but it has never looked at its Little League all-stars as an us vs. them showdown. Each game Hawaii basically plays itself. It has viewed things that way all summer and no matter how big Saturday’s game is, that approach is not changing.

And make no mistake, this is as big a Little League game as an American play. This is for the country’s biggest prize. The winner captures the national championship and will play Sunday for the world championship against either Japan or South Korea.

Hawaii-Georgia is a rematch of one of the most exciting Series game played in recent memory. Hawaii edged Georgia, 2-0 in 11 innings last Friday in the Series opener for both teams. Georgia shook that loss off and has stormed back, winning four straight elimination games, including a stirring 7-6, 9-inning comeback win against Texas last Monday.

While that opening loss was heartbreaking it did not shake Georgia. In fact, it probably gave it more confidence.

“They knew how good that game was. We tried to drill it into their heads that they just participated in a very special game,” Georgia manager Patrick Gloriod said. “One hit either way would have changed it. They weren’t down at all. They were proud of themselves, going home watching Sports Center and seeing it was the longest game in LLWS history is pretty cool.”

As good as Georgia is and fantastic that first game was, Hawaii is not changing anything. The West champions are undefeated this summer and have outscored their last two Series opponents, 18-3. They also have every pitcher available, including ace Aukai Kea who has thrown 10 2/3 innings of scoreless, three-hit baseball while striking out 16.

Kea hit a walk-off home run against Georgia and threw 6 1/3 innings of 2-hit baseball in the Series opener. He followed up with 4 1/3 shutout innings against New York, striking out six.

“He was more calm (Wednesday) and relaxed and credit to him,” Oda said. “It’s tough coming into this game. I cannot imagine a 12-year-old stepping onto the mound in this kind of situation and being calm and relaxed, but he looked a lot more calm.”

That is how Hawaii designs things. The coaches do not put pressure on the players. The us vs. us mentality goes along with that approach. Instead of focusing on what the other team does and how good the other team is, Hawaii simply focuses on itself.

Take care of the little things, play hard and see what happens. Instead of letting nerves take over, Hawaii players have learned to embrace the exciting moments that so often make the difference between victory and defeat.

That was obvious against Georgia when Hawaii never buckled during an epic 11-inning game that was tied for the longest in Series history. Georgia did not either, so Hawaii just kept plugging ahead and trusting each other before Kea ended the game at 11:55 p.m.

“I think that even without that 11-inning game, even if we lost, we would still come hard as a team and try to get to the championship game,” second baseman Sean Yamaguchi said.

One would be foolish trying to argue with that assessment. In addition to featuring deep pitching and shutting out two of three Series opponents, Hawaii has come alive offensively. Sean Yamaguchi hit a grand slam against New York, going 3 for 4 with five RBIs, and Kea is hitting .500.

Then there is the Hawaii defense. The West champions have made just two errors in three games and often have made super plays like routine. Jace Souza provided the latest example, making a sensational diving catch that took away a likely New York lead-off single in the second inning Wednesday. Plays like those can be game-changers.

“We try to reinforce to the kids that if you make an error, it’s not the end of the world. Just focus on what you want to happen vs. things that you’re afraid might happen,” Oda said. “It’s a steal the moment (philosophy). Credit these kids. They want the ball.”

So do Georgia’s players. This team has proven as resilient and tough as it has talented. The Southeast champions were down to their last out against Texas, trailing 5-2 with no runners on base. Jansen Kenty tied it with a two-run home run and Ben Traxler’s sacrifice fly won that game.

“I think we have a tremendous amount of momentum,” Gloriod said. “This gets to whatever happens in a game they know, regardless, they are going to have a chance of coming back and winning it.”

Jansen threw 5 1/3 shutout innings against Hawaii and struck out 12, but cannot pitch Saturday after throwing a complete-game against Michigan. The same goes for Tai Peete who was brilliant against New York. That likely means hard-throwing Connor-Riggs Soper will earn the start. Riggs-Soper threw well against Texas, striking out seven in 5 2/3 innings.

Riggs-Soper is backed by a superb defense that has made tremendous plays throughout the season that often have saved runs and/or squashed rallies. Just as important, the offense has come alive. Georgia scored three runs in its first two games, but has produced 18 in its three victories since. The contributions are coming throughout the lineup with Peete and Jansen providing pop at the top of the lineup, Jack Ryan in the middle and reserves like James Hooper and Will Klem making things happen off the bench.

This is the first team from Peachtree City to reach the Series and it traveled a tough road to reach South Williamsport, going through 2006 and 2007 world champions Columbus and Warner Robins in states before surviving a fiercely competitive Southeast field.

Then came the Series. Georgia could have buckled after the Hawaii loss. It could have been rattled against Texas. It could have packed it in against New York. But here Georgia is, one win from becoming the country’s best team.

“This is just a crazy good group of kids,” Gloriod said. “They are the definition of teammates. They want to pick each other up.”

However one approaches this game does not matter. Whether it Hawaii vs. Georgia, Hawaii vs. itself or Georgia vs. itself one thing is certain. This could be a classic U.S. Final.

“I’m excited. It’s a great group of coaches and they are just really nice people and their kids are super nice and get along with our kids,” Gloriod said. “We had a great game, an epic game. I told my boys after the (New York) game I want them to go into the game thinking they can beat (Hawaii) because I think we gave them their toughest game of the week.