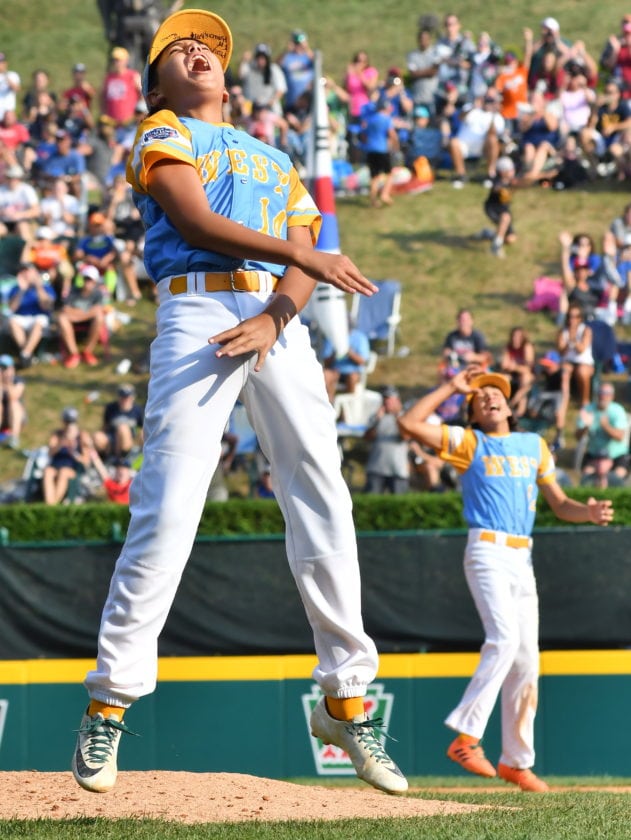 One out from achieving Little League Baseball immortality, pitcher Ka’olu Holt squatted behind the mound and surveyed the scene. He then looked toward second baseman Sean Yamaguchi and pumped his fist.

Holt knew how good his team was. He knew how well he was throwing. He knew all that remained was putting the finishing touches on a summer-long masterpiece. Five pitches later, Holt struck out Gi Jeong Kim. He threw his hat into the air and soon was engulfed by happy teammates who literally jumped for joy.

“It was amazing because I always wanted to come to Williamsport and just play. To win it was great,” Holt said. “It’s just a dream come true.”

Honolulu continued Hawaii excellence at the Series, becoming the fourth straight team from its state to reach the world final and the third during that time to win the world championship. It capped a perfect season the perfect way.

And Hawaii played nearly perfect baseball. It finished one of the more dominant runs in recent Series history, outscoring four opponents, 26-3. The new world champions received superb pitching, spectacular defense and timely hitting while holding opponents scoreless over their last 17 innings. So overpowering was Hawaii that it allowed runs in just two of 34 innings played, delivered shutouts in four of its five games and did not allow a run over its last 17 innings.

“This world is a big place and coming from Hawaii we forget even though we’re thousands of miles from the main land and we’re this little rock in the Pacific that if we work hard and have big dreams and try your best sometimes we make it, sometimes we don’t, but the most important thing is the effort,” Hawaii manager Gerald Oda said. “I’m hoping and praying that there’s probably a 5-year-old kid that watched this game and he’s thinking about, ‘some day I want to make it to Williamsport.’ It’s no different than in 2005 when the first team from Ewa Beach won it. It gives us hope that we can do this. I’m just so humbled to be part of this opportunity to just give back to our community and just to thank them.”

After opening the Series with a 2-0, 11-inning win against U.S. runner-up Georgia in the longest game ever played at Lamade Stadium, Hawaii went into overdrive and different players repeatedly shined in the biggest moments.

Nothing changed Sunday either. Holt pitched about as well as anyone can on such an enormous stage, Kong delivered the biggest hit of his life and the defense played an error-less game. A team that provided comfort back home as Hurricane Lane touched down also overcame illness and one strong opponent after another.

“It was an awesome opportunity to be able to catch all the games in Williamsport,” catcher Bruce Boucher said. “It will be a great memory.”

Hawaii proved as tough as it did talented. It also shared the Jack Losch Sportsmanship Award with Georgia and epitomized everything Little League Baseball tries representing.

“That (Sportsmanship) award meant a lot more. We told them you guys played the game the right way not only on the field but off the field,” Oda said. “Winning that award made me feel really proud of these kids. What we kept preaching to the kids is whatever happened, happened. That’s not important. It’s what you’re going to do from this moment on. We just keep telling the kids you have to keep fighting.”

That is exactly what Hawaii did all summer and against a tremendous South Korea team.

South Korea also entered the world final undefeated and ace pitcher Yeong Hyeon Kim started after striking out 25 in his 10 Series innings. It was a daunting challenge but Hawaii has embraced those all years.

And when Kim threw his first pitch, Kong struck a King Kong-like blow. The first baseman opened the bottom of the first by slamming a lead-off home run off the brick wall beyond the right-center field wall. In a flash, Hawaii had a lead it never relinquished and an electric tone had been set.

“It felt really great. We all knew that pitcher was really tough to hit and it’s going to be a battle between both teams,” Kong said. “Rarely any Hawaii teams get to be in this moment and get to feel what it feels like to be meeting other people all around the world and to be playing baseball against them, too.”

Kim did a marvelous job pitching out of a bases-loaded jam in the second inning, but Hawaii extended its lead an inning later, taking advantage of two walks, a wild pitch, an error and Hunter Nishina’s pinch-hit single. Boucher ignited the rally with a one-out walk, Nishina followed with a single and Jace Souza walked.

Pinch-runner Zachary Won scored moments later on a wild pitch. When the throw home went past Kim, pinch-runner Taylin Oana sprinted home and made it, 3-0.

The way Holt was pitching the score might as well have been, 30-0.

Holt was untouchable at the West Regional when he struck out 18 in 8 2/3 innings. He was even better at the Series. And in the biggest game Holt has ever played, he was absolutely at his best.

Holt not only held a potent offense to two hits, but also struck out eight, walked just one and threw strikes on 54 of his 79 pitches. Remarkably, this was the first time Holt ever completed a game.

One could never tell Holt had never gone the distance before. He appeared in cruise control all afternoon. Holt threw 14 first-pitch strikes to the 22 batters he faced, let just two runners advance past first and stranded Jae Hyeok on third in the third inning when he induced South Korea’s top hitter Ji Hyung Choi into hitting a pop-out to the mound.

That was the last time the International champions mounted a serious threat. Holt was that good and finished the Series, going 2-0 with 14 strikeouts in 12 2/3 innings. Moments after the celebration ended, Holt laid in the infield dirt in disbelief. He rose to his feet a few seconds later and raised his arms in celebration.

Simultaneously, deliriously happy Hawaii fans stood and applauded while waving state flags. Holt envisioned moments like this growing up, but the reality far surpassed any expectations he had.

“If they scored a couple runs I would have let down my team. I had to have their back and keep throwing strikes,” Holt said. “It was nerve-wracking because I knew if I walked him (the last batter) I might not have been able to finish the game and if I couldn’t do that I would have been sad. It’s great because if you fall down they (his teammates) will pick you up. It just helps you going through the game.”

Hawaii left South Williamsport at 3:30 a.m. this morning and likely will arrive home at 1:30 p.m. Had they not won a Series game, these players and coaches still would have returned as heroes. Everything they have endured and overcome along the way, though, makes it even sweeter.

Whatever the future holds, this group will always be linked together. This team that took post-game cardboard slide rides down the Lamade Stadium hill has become a Hawaii inspiration.

“What I’ve learned from all those years is just enjoy the moment. Thanks to these kids,” Oda said. “When we won regionals we were so happy to come to Williamsport. It still hasn’t sunk in. It’s surreal. I feel like I’m still in a dream.

“I’m just very fortunate to have this opportunity with these 14 kids.”