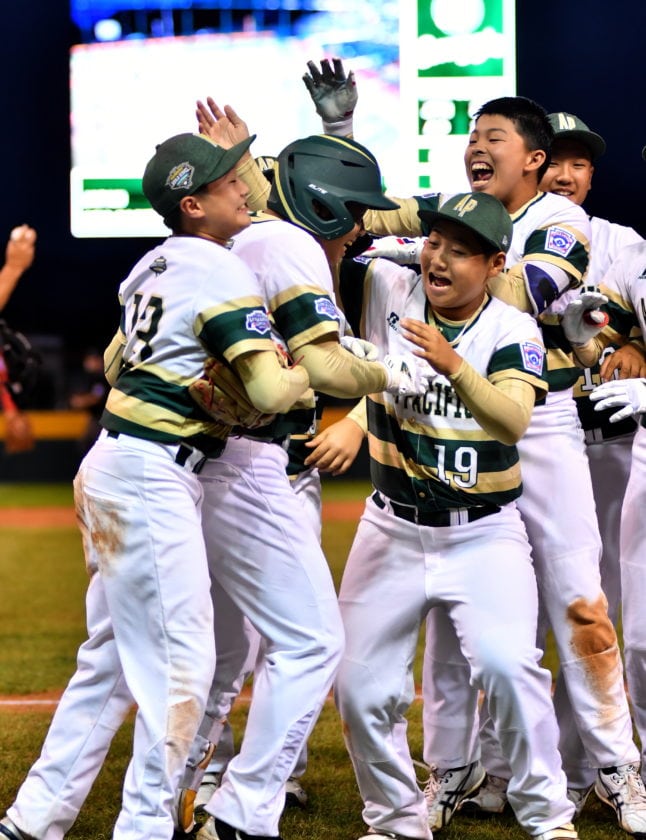 Japan meets Asia-Pacific Regional champion Seoul, South Korea today at 12:30 p.m. in the International final with a spot in the World Series championship on the line. On Wednesday, Asia-Pacific made quick work of Japan, 10-0, in four innings. The game wasn’t as close as the final score would indicate, either. South Korea’s Yeong Hyeon Kim threw just 49 pitches in the four-inning game as he allowed just one hit, no walks and struck out 10. Kim is available to pitch today if need be.

But none of this matters. Japan is resilient. Every step of the way since the beginning of summer Japan has clawed its way to get to this moment. Now it has a chance to do it one more time in a rematch of the 2014 international final

“Before we came here, in the Japan tournament, we lost our first game. We also came back in the national tournament, but now we’re here. (Wednesday) we lost and this is the situation. I told our players we still have one more game and I told them if we win today, we can play two more games at Lamade and we can play for the Final Four in the world so we need to enjoy it,” Japan manager Hiroyuki Takahashi said through an interpreter.

Seoul, South Korea is searching for its sixth berth to the championship and has won three world titles with the most recent win coming in 2014. It lost the final in 2016, 2-1, to Maine-Endwell, New York.

Since its 4-2 extra-inning win over Caribbean Regionl champion Puerto Rico on the Series’ opening day, South Korea has grown stronger. It topped Mexico, 5-1, and Japan, 10-0, to remain as the last international undefeated squad.

South Korea is led by a dominant pitching staff that has allowed just one earned run and given up a measly eight hits in 19 innings pitched. Four pitchers have combined to walk just three and has a microscopic ERA of .316. The squad is led by Kim and his 8 2/3 innings thrown and .692 ERA. Shoo Hoo Choi threw six innings and earned the win against Mexico.

“Honestly, we don’t worry about the pitching because pitch count is maxed, so we can’t use our full force. To be honest, we haven’t decided yet. … The best guy will pitch, but we haven’t decided yet,” South Korea manager Ji Hee Su said through an interpreter. “Also, our condition, everything’s getting back. So we’re ready to play in the first game (international final) and try to win.”

The offense doesn’t provide a lot of pop but is consistent with two batters with 12 plate appearances and at least a .550 average. Ji Hyumg Choi is batting a team-best .667 with two home runs and five RBIs. Gi Jeong KIm is right behind him with a .556 average and three RBIs. Yeong Hyeon Kim is tied with the team lead of five RBIs.

Japan is much like South Korea with a strong pitching staff and an offense that makes consistent contact. The squad is hitting a collective .275, led by Eisaku Nakajima’s .750 batting average. Shinji Furusawa has been the most consistent hitter as he is batting .429 in eight plate appearances. Yuya Ito’s three RBIs lead the team and Shisei Fujimoto has also hit the team’s lone homer.

Japan also boasts an impressive 3.90 ERA with 13 total runs given up, but 10 of those runs came in the loss to Asia-Pacific. Masato Igarashi leads the rotation with a 1.80 ERA in 6 2/3 innings pitched. Shinji Furusawa hasnát allowed a run and has given up just two hits in three innings of work and Yudau Yuasa has gotten four outs while not giving up a run.

Despite being this late in the Series, Japan, like South Korea, isnát worried about pitch counts and rest.

“(Friday) is our day off so we can get a rest and get ready for the Final Four,” Takahashi said through an interpreter.