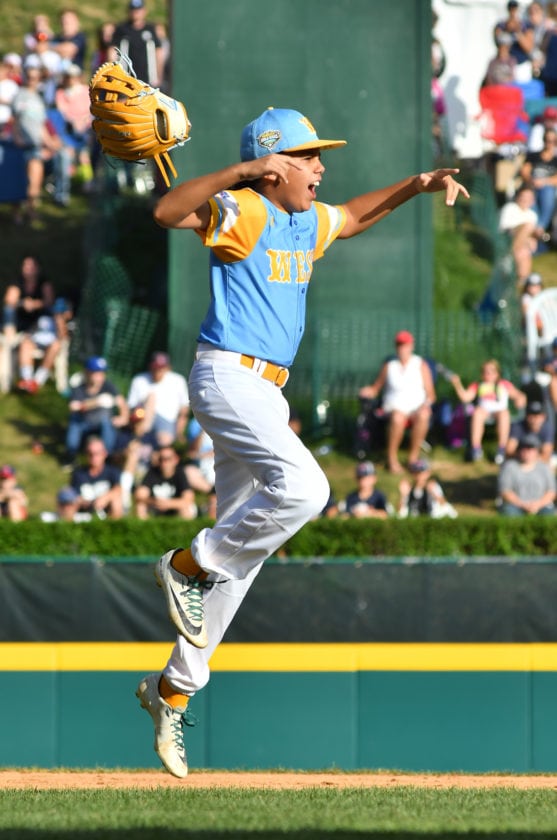 As he sat at the very end of the press conference table with a bag of ice taped to his right shoulder, Hawaii pitcher Aukai Kea admitted that he thought he was just pitching normally and trying to hit his zone.

“I didn’t even realize that I was doing that good,” Kea said.

Hawaii manager Gerald Oda couldn’t have possibly asked Kea to do any better than he did.

Georgia struggled to figure out Kea’s splitter, as he used it effectively and frustrated Georgia hitters, who would take huge swings only to whiff on the pitch.

“We’ve been trying to work on my split for awhile, but recently it’s been working very good,” Kea said. “So coaches had it the other game to try to use it and it worked well, so we tried to again this game. It’s really good.”

Chase Fralick had Georgia’s first hit in the top of the second inning, a single to shallow left field. But after a strikeout, Georgia grounded into an around-the-horn double play to end the inning. Kea struck out all three batters in four of the six innings.

The only Georgia player to have multiple hits was Tai Peete, who had a single to right field to lead off the fourth inning, and one to left-center in the sixth. Both times he was stranded at first base as Georgia’s talented offense was held in check.

“He was better than I’ve ever seen. We watched a lot of his games. Kids said it was a split-finger. It was just nasty (Saturday). He kept going off-balance with it and throwing hard,” Georgia coach Patrick Gloriod said. “Our kids have shown they can hit this week. That was the big knock against us. They’ve shown they can hit and good pitching beats good hitting.”

It took a few innings for Hawaii’s offense to get things going. In the first two innings, Hawaii had two runners reach base, but Georgia pitcher Connor Riggs-Soper forced a groundout to himself to end the first inning with runners on third and second. In the second inning, with runners at first and second, Riggs-Soper induced a Mana Lau Kong fly out to center field to end the threat.

“We’re really strong defensively, obviously,” Gloriod said. “They’re just a really talented group of kids and they work hard in practice all the time. It shows when you get out on the field like that.”

Hawaii broke open the scoreless game in the bottom of the fourth inning.

After consecutive strikeouts to start the inning against Jace Souza and Taylin Oana, Hunter Nishina reached with a single into shallow left field. The very next batter, John De la Cruz, hit a rocket into the right-field gap to drive in Nishina and give Hawaii a 1-0 lead it never gave up.

It was the first hit of the Little League World Series for De la Cruz, and came in his mandatory at-bat of the game.

Not a bad time for it.

“It felt good because I didn’t get a hit in the whole tournament and going in as a pinch-hitter and hitting it and scoring a run? It was an amazing feeling,” De la Cruz said.

Hawaii collected six hits off Riggins-Soper and relief pitcher Ben Traxler. And while no player had more than one, the Hawaii players who did have a hit made it count.

In the top of the fifth inning, Sean Yamaguchi was intentionally walked with two outs. Georgia tried to avoid the powerful hitter, but it allowed Bruce Boucher to step to the plate and do damage.

Georgia did have a runner reach base in the sixth when Peete singled, but despite Georgia’s best batter in Jansen Kenty coming up with two outs, Peete was stranded when Kea had a huge strikeout to end the game.

Georgia will have one more game this summer when it plays Japan today in the consolation game. Gloriod was telling his team all week it would be cool to play traditional Little League powerhouse Japan.

While they wanted to do it for the championship, they get that matchup today for third place.

“They’re just an iconic kind of Little League program. So after the game, (assistant coach) Randy (Clem) told the kids this is like going to go play the Yankees,” Gloriod said. “We’re going to go out and, obviously would love to win our last game and go out on a high, but the kids have already accomplished so much. We’re just going to go out there and do our best.”

That’s the same sentiments Oda echoed about having to play South Korea in the championship game.