Kenty has become a big-game player 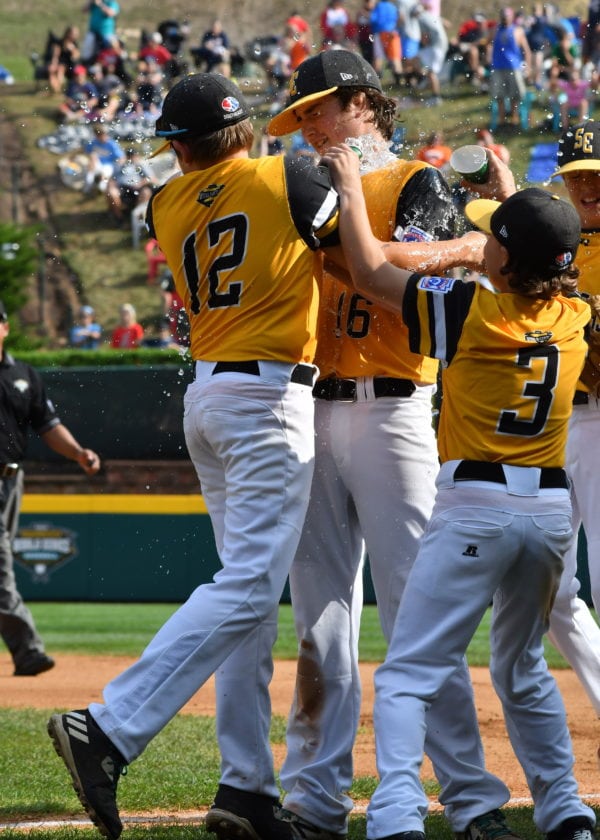 MARK NANCE/Sun-Gazette Georgia pitcher Jansen Kenty and James Hooper are both doused with a cup of water from Will Clem after the Southeast beat Michigan at Howard J. Lamade Stadium on Wednesday.

As millions watched worldwide, Jansen Kenty fell behind 0-2. The entire Peachtree City, Georgia postseason was resting on his shoulders.

And Kenty felt right at home. The more pressure the better. Kenty embraces these situations like a father does a newborn child.

Kenty took a pitch and then unloaded a game-tying two-run home run Monday night against Texas. Georgia eventually won the game, 7-6 in nine innings. Two days later, Kenty stranded the tying runner at second and threw a four-hit complete-game as Georgia defeated Michigan, 4-3, and became one of the final three U.S. teams.

Obviously, Kenty has become quite a big-game player.

“Nothing rattles Jansen. He has such a great demeanor,” Georgia manager Patrick Gloriod said. “He will go through anything.”

Georgia reached Thurdsay’s losers’ bracket final because it is a great team. But take away Kenty and no way would the Southeast champions have made it this far. It has not always been sunshine and rainbows throughout this summer-long run, but when Georgia has needed Kenty most he has delivered every time.

That is why Kenty’s teammates remained so confident despite Texas leading 5-2 on Monday with two outs and nobody on base in the sixth inning. Teammates predicted that Bo Walker would reach base, Tai Peete would drive him in and Jansen would hit a game-tying home run.

Walker and Peete did their part and Peete’s double made it, 5-3. Kenty then delivered the hit of his life, slamming the game-tying home run over the left-center field wall.

“I was really motivated,” Kenty said. “I was really ready to step up there and do my job at that time because I really hadn’t been hitting that well the beginning of the tournament.”

A gifted first baseman who features excellent range, Kenty can be a force in Georgia’s lineup, bolstering the middle of the lineup. He compiled a .545 on-base percentage at the Southeast Regional tournament and entered Thursday’s game hitting .308 at the Series.

As good as he is offensively and defensively, Kenty might excel even more on the mound. The hard-throwing left-hander combines nasty breaking pitches with a fastball that consistently hits the mid 70s. No team has figured out Kenty this summer.

Before allowing a second-inning run against Michigan, Kenty had thrown 18 straight scoreless innings at regionals and the Series. In two Series outings, Kenty is 1-0 with a 1.59 ERA and 21 strikeouts in 11 1/3 innings. Since regionals, Kenty has struck out 47, stifling some of the country’s top offenses along the way.

“His fastball is overpowering,” Gloriod said. “It’s something he can throw by most kids, especially coming from the left side, and he locates so well.”

“I like having the ball a lot because I can control the game,” Kenty said. “It’s really fun because I can stay loose and have a lot of confidence.”

Kenty exudes confidence. He is a player who wants the ball or bat in crucial situations. But he also is an unselfish player. The team matters most.

That trait came shining through in the fifth inning against Texas. Georgia trailed 4-0 at that point but was in a bind because it had yet to get all its substitutes an at-bat. Because Gloriod had to plan for a scenario in which his team might take a lead and then not bat again in the sixth, he was forced to pinch-hit for Kenty.

To use a Major League analogy, this was the equivalent of asking someone like Mike Trout or Bryce Harper if they did not mind someone hitting in their place.

Kenty made no scene. He trusted his teammates, believed he might get another chance and gave the team a spark without swinging the bat.

“Jansen was cool as hell. He didn’t give me a look, didn’t react. He said, ‘no problem,’ took his batting gloves off and took helmet off and put it down,” Gloriod said. “I’ve gotten to be pretty close to Jansen and he could have made that much more difficult on me if he would have taken out some anger on me because he is such a great hitter. It shows a great deal of maturity on his part to realize it’s the situation and then come back up and want to win the game.”