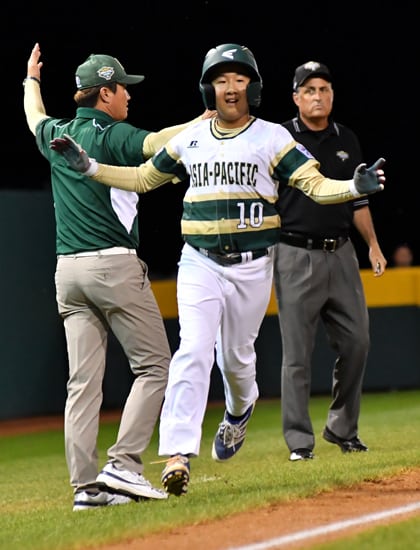 South Korean pitcher Yeong Hyeon Kim admitted he started to pitch with a sidearm delivery in only the last year. If he wasn’t asked on Wednesday night about his pitching style, you would have assumed he’s been throwing that way for his entire career.

Kim threw a four-inning complete game, yielding only one hit, as he kept Japan’s offense quiet in a 10-0, four-inning rout at Volunteer Stadium to secure a spot in the International championship game. The Asia-Pacific Region champs will face either Japan or Puerto Rico, the two teams which will play today at Howard J. Lamade Stadium in an elimination contest.

And Kim’s dominance on the mound wasn’t a surprise to Japan, especially not manager Hiroyuki Takahashi.

“We knew he was a good pitcher. Today we gave up a lot of strikeouts, so that was (difference in game),” Takahashi said through an interpreter.

Ji Hyung Choi dropped a single just in front of Japan’s left fielder. A double and walk in the next two at-bats loaded the bases. Kim did damage with his bat, too, crushing a double off the outfield wall to clear the bases and give South Korea an early 3-0 lead. A

And from there, South Korea kept rolling.

The Asia-Pacific Region champions scored four runs in the first inning, all with two outs, and went through all nine batters before Japan finally recorded its third out. In the second inning, it was another long inning as South Korea sent seven batters to bat and scored two more runs courtesy of a home run to center field by Choi which brought in Ho Hyeon Eom, who reached on a single down the left-field line.

South Korea ended with 10 runs, which ended with a two-run double down the left-field line by Kim which put the mercy rule into play. The game ended after just four innings, the last of which was a four-run effort by South Korea.

As soon as Kim trotted around first base and saw the ball rolling toward the left-field fence, he put one of his hands up and pointed to the sky knowing the game was over.

“To be honest, his connect with hitting was good, but I didn’t expect it that much today,” South Korea manager Ji Hee Su said. “First of all, he’s pitching very well so that’s reason he can hit well. He was better hitting than usual today.”

Hard to believe coming from a kid who was 2 for 3 with two monster doubles, five RBIs and a run scored.

South Korea also had multiple hits from Gi Jeong Kim (2 for 2, double, RBI, two runs), Shoo Hoo Choi (2 for 2, RBI, two runs) and Ji Hyung Choi, who went 3 for 3 with two singles and a two-run home run deep into center field in the bottom of the second inning. For Choi, the fact Japan was favored by some in the game to beat South Korea was a motivating factor for him.

“Japan and Korea is a big rivalry together (in Little League), I saw some of the news and Japan was favored to win this game, so I was thinking I’m going to do better,” Choi said.

Japan struggled trying to figure out Kim on the mound. The only Japanese batter to reach was Eisaku Nakajima in the top of the third inning with a shallow single to left field, but he was stranded as Kim did what he does best and struck out the next two batters to end the inning. And perhaps even scarier for Japan and Puerto Rico is that Su could put Kim back on the mound Saturday for the International championship after throwing only 49 pitches yesterday.

After going ahead 4-0 from the in the bottom of the first inning, South Korea’s Ho Hyeon Eom reached with a single down the left-field line before Choi crushed his home run to give South Korea a 6-0 lead.

In the fourth inning, a walk and a shallow single put two runners on to allow Kim to hit a shallow single and bring in Jae Hyeok Lee for a 7-0 lead. Choi then connected with a single the next at-bat to bring Choi home.

That’s when Kim then came up clutch and delivered the game-ending hit to bring in two runs with his double into left.

Kim couldn’t have been asked to do anything more than he did Wednesday, but having been around him all summer, Su knows he could be even better on the mound.

“I think he has potential to pitch better than today, but still working on his pitching style,” Su said. “He’s getting better with good pitching.”

Getting better witih his pitching may be a bit of an understatement after Wednesday’s performance.