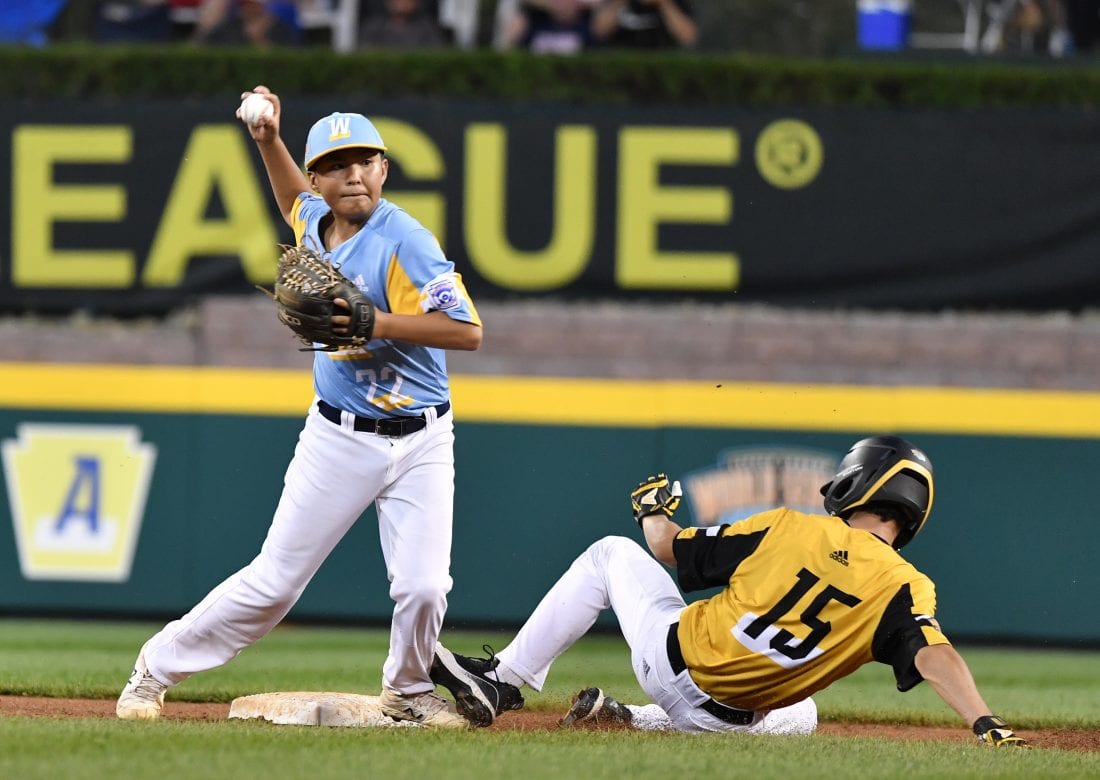 MARK NANCE/Sun-Gazette Hawaii short stop Bransyn Hong throws to first base after a force on Virginia’s Brady Yates on a Justin Lee single in the first inning at Lamade Stadium. Hawaii is a game away from playing in the World Series championship and faces Louisiana today in the United States championship game.

They also once competed against those players. And that contest did not go well.

Honolulu won those games, but that experience and Honolulu’s world title run inspired Central Maui East players from Wailuku, Hawaii. Now they are the ones winning championships and Little League World Series games.

Now it is Wailuku that finds itself one win from playing for a world championship.

Wailuku will play for both the U.S. championship and a spot in the World Series championship game today at Lamade Stadium when it faces River Ridge, Louisiana. The winner plays Japan or Curacao in Sunday’s title game, while the two losing teams face off in the consolation game.

“We’re just basically telling them to stay focused and if Honolulu can do it, then they can do it. The funny thing is when these guys were a little younger they played against them and they got their butts kicked by those teams,” Hawaii manager Brad Lung said. “A lot of these kids looked up to those boys so it was a special moment for everyone in Hawaii. They’re just trying to do their best and represent our state well.”

And they are doing quite a good job achieving that goal. But so too, is Louisiana. The Southwest champions never flinched after dropping their Series opener against Hawaii. They have won four straight since then, growing stronger each game and battering Virginia, 10-0 in five innings Thursday night to earn a rematch.

Louisiana outhit Hawaii that first time, but could not deliver the big timely hit and a late comeback attempt fell short. Still, the Southwest champions are hitting their stride and playing nearly every day this week has it in quite a rhythm as it tries becoming the first Louisiana team to reach a world final in the 21st century.

“From Day 1 we all had confidence that we could go far,” Louisiana third baseman Ryder Planchard said. “Now we can keep pushing forward with our pitching.”

“Their baseball IQ is extremely high. These guys have played a lot of baseball and we’ve practiced every day except for two or three since all-stars has begun,” Louisiana manager Scott Frazier said. “We preach the fundamentals constantly and are constantly working on it. The more you do it, the more confident they get.”

Hawaii also is playing with increased confidence. It has lost just once this season. Ironically, that defeat came against Honolulu. For Hawaii to reach its goals it had to go through the defending world champions and it defeated them in the state final, 8-5. Hawaii has not lost since, going undefeated at the West Regional and the Series.

All three Hawaii Series wins have come against the country’s top 4 teams. Combine its Series success with the fact that the past four Hawaii teams competing in South Williamsport have reached the world final and this team could feel the pressure mounting.

Then again, when one wins as many elimination and/or big games as Hawaii has this summer, it has become quite accustomed at handling pressure.

“There’s a lot of pressure on us, but we’re all brothers. We help each other out,” outfielder Shiloh Gilliand said. “We help relieve the pressure on everybody. We’re going to do well.”

Focus has not been an issue. Hawaii practices and thinks big. It goes over different contingencies that could arrive during games and is ready for countless situations.

That showed against Virginia. Hawaii scored five first-inning runs and led by six in the third inning when Virginia put together a furious rally and tied the game, 8-8. Unfazed, Hawaii scored four runs in its next two at-bats, building a four-run lead that it did not relinquish.

“When they came in it was mental focus. We constantly tell them, let’s remember what we came here to do. I think that brought everybody back to that focus,” Lung said. “I just try to have fun with them. They’re kids. They get down, they’re nervous and I just try to have fun with them. We’re playing a baseball game and you guys have to refocus. You laugh, you make jokes and I think that helps out big with children, especially kids this age.”

Hawaii is as deep as it is talented and 10 players combined for a U.S. Series-high 13 hits in the Virginia win. The reserves have been as potent as the starters with Gilliand and Nicholas Nawisha combining for six RBIs off the bench over the last two games.

Hawaii’s pitchers also are strong and ace Jaren Pascual is available to pitch today. So too is Logan Kuloloia who threw 3 1/3 shutout innings against New Jersey. Isaac Imamura, who reached base in all five at-bats against Virginia, also could throw and has not allowed a run in 2 2/3 innings, closing out the New Jersey victory.

While he allowed nine hits in the Series opener against Louisiana, Pascual kept coming up big under pressure and stranded runners in every inning, including leaving the bases loaded in the sixth inning. He also helps spark the offense and is hitting. 333 with a home run, double and four RBIs.

“Jaren is the most improved player we had this year. It’s leaps and bounds. He’s just going with it and he just seems to be getting better and better and I just enjoy watching it happen for him,” Lung said. “We’re super stoked for him about it. He lives, eats and sleeps baseball. It’s a fantastic thing that’s going for him right now and our team. Everybody looks up to him right now. He’s really turning into a leader for us.”

Louisiana has some strong leaders, too. That has especially shown since the first Hawaii game. Louisiana outscored opponents through its state tournament, 79-0. It then cruised through the Southwest Regional and ended Texas’s seven-year title reign.

Faced with adversity for the first time, Louisiana has shined, beating Oregon, 3-2, Minnesota, 11-0, and New Jersey, 4-1. The most impressive performance came against Virginia as Louisiana dominated all facets, Marshall Louque threw a no-hitter and Louisiana mercy-ruled an opponent for the second time in three games. The offense keeps gaining momentum and produced 13 hits. Louque cannot pitch, nor can Egan Prather, who was brilliant against New Jersey, but Louisiana has showcased its pitching depth throughout the summer and that depth is a major reason Frazier was not overly worried about Louisiana’s Series prospects following the Hawaii defeat.

“We have confidence in the whole slew of pitchers that we have because the guys are going to throw strikes, they’re going to mix their pitches and our defense is really good,” Frazier said. “That’s why we’re so confident with the pitching.”

It also helps when the offense keeps growing more explosive. Louisiana has reached double-digit hit totals in two of its last three games and it produced seven hits during a seven-run, fourth-inning eruption that buried Virginia in Thursday’s losers’ bracket final.

Right fielder Reese Roussel has been one of the best hitters of the entire Series field, going 13 for 17 with a home run, five doubles and six runs. Roussel went 3 for 3 against Virginia, hitting a grand slam that broke things open, while doubling three times, driving in five runs and scoring twice.

Put everything together and the Hawaii-Louisiana rematch could be even more exciting than the first thriller the country’s top two teams played.

Both teams are fiercely-competitive, but the big picture also is being kept in perspective. Win or lose, all these players will have some good stories they can tell their friends and family members as long as they live.

“The game, out here practicing, walking around, whatever you’re doing it’s just constantly unbelievable,” Frazier said. “I’m always preaching to these guys to stop, take a deep breath and look around and enjoy and appreciate where we are and what we’re doing. It’s more than just winning and losing. These guys are living a dream that’s just unbelievable.”