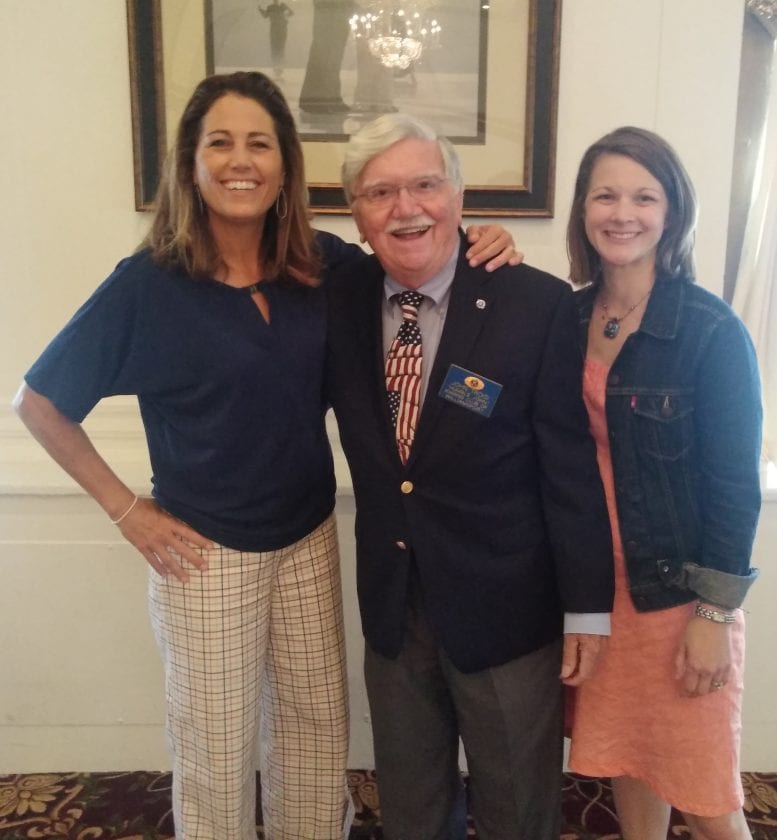 Julie Foudy mentioned how she’s covered Women’s World Cup games, the Olympic Games and even the Special Olympics. She’s interviewed more people than she can probably remember. But for Foudy, her favorite thing to cover? The Little League World Series and it isn’t even close.

“People ask me ‘what’s your favorite thing to cover?’ I say this because there is a feel that you don’t get in televison. I think that’s a large part of what you’ve created with this community. It’s fun, there’s joy, there’s energy and passion within the stadium and within the families that come here and there’s a history and tradition,” Foudy said to those in attendance Thursday at the Ray Keyes Salute to Little League Baseball luncheon at the Genetti Hotel. “Most of all, there’s a community and to be able to walk in my third year and see the ushers yell ‘Julie!’ (is great).”

Foudy gave a speech and fielded a handful of questions from those in attendance and took photos with anyone who wanted one, including a few younger girls who noted they played soccer.

If anyone knows soccer, it’s Foudy.

She was a four-time All-Ameican at Stanford and led the team to four NCAA playoff appearances. She ended her college career with 52 goals and 32 assists.

After she retired from playing, she became a sports broadcaster with ABC and ESPN. She was inducted in National Soccer Hall of Fame in 2007. She created the Julie Foudy Sports Leadership Academy with her husband in 2006, which focuses on sports leadership for girls on and off the field.

Foudy didn’t get the chance to come to the luncheon last year due to having to broadcast a game from a rain postponement. She joked about how she had to call the game.

“We had no one to call the game over at Lamade because they sent those commentators from Volunteer home, so I — a soccer player — ended up calling a baseball game last year instead of coming to this luncheon,” Foudy said to laughs. “I’d have much rather come to the luncheon.”

Having a soccer background, Foudy admitted she didn’t know much about baseball when she was first asked to broadcast games with ESPN. But Foudy always wanted to make the trip to South Williamsport having watched the games on TV for years.

“You’d see how much fun it is. Nomar Garciaparra covered it and he’d talk about it and there was always a World Cup or Olympics with my schedule and I couldn’t cover it. So for years, I’d try to get on, and when I could do it they’d always be like ‘we already have a reporter,'” Foudy said. “Full disclosure, I don’t know a ton about baseball, but the beauty is I don’t need to know a ton. I just need to talk to people and share stories.

“It’s so refreshingly different from what I have to do. Talking to families about their kids or talking to volunteers, talking to ‘Dancing Doris’ who’s been watching it for 80 years. I know I speak for everyone at ESPN when they say it’s so different and you can hear how much fun we have.”

Foudy’s boss at ESPN told her one simple thing when they sent her on assignment: be you and have fun. And that’s worked out for Foudy at the Series when she’s broadcasting games.

The former two-time World Cup champion and two-time Olympic gold medalist noted that she wants to be able to come back in the coming years to speak at the Rey Keyes luncheon again, something she enjoys. She’s also a member of the Williamsport Kiwanis Club and spoke highly of the things they do for the area.

“I’ve heard wonderful things about how strong the Kiwanis Club is here in Williamsport … What you do in the community is so nice to hear because I’m from California and from a city that doesn’t have this type of feel,” Foudy said. “The importance of knowing you’re here to help and we’ll have your backs and will lift you up, I think that’s a really important message that shouldn’t get lost.

“I’m pleased I can be a small part of it. I’ll continue to be a proud member, rocking it from a far.”

Foudy noted that she was disappointed she didn’t get the chance Monday to talk to and interview members of the South Williamsport major softball team that was honored prior to the first pitch between Louisiana and Minnesota.

“They were amazing. They were so good making it to the Little League Softball World Series,” Foudy said of South Williamsport.